Sorry for the delayed response, I have just spent 2 days on my daughters roof - much easier than capturing photons

I have created a comprehensive post about my latest M42 capture in the Gallery viewtopic.php?f=16&t=1347. This should answer your questions. Yes the captures were 90 seconds per frame, 30 of them being stacked along with dark, bias and flat frames.

The equipment I am using now I consider modest but serves me well when attention is paid to detail. The camera is an Atik 314E CCD (released circa 2010) second hand obtained off eBay at a cost £300 (would have been ~£1200 new); the mount is a Celestron AVX Equatorial Mount, second hand from AstroBuySell at a cost of £500, the telescope an Altair 66ED-R refractor, an ex-demo model at a cost of £260; Bahtinov Mask cost around £15. This scope does not have a motorised focuser - I manage quite well with the 10:1 manual focuser. The JMI motorised focuser is on my Celestron C8. Note that the mount cost was roughly the same as scope + camera cost.

I have made some poor equipment choices in the past and accept that progress in this hobby is evolutionary rather than revolutionary.

I think if I had the above gear when I started out I would still have bloated stars, star trails and poor tracking - progress in this hobby is hard won and requires discipline and persistence. Spending ££££££'s does not equate to success.

I now have a 200mm F4 lens, which I can use instead of a telescope. This year my focus will be on trying to achieve shots
like this http://www.clarkvision.com/galleries/ga ... b5x5s.html

Also this year I will strive to improve my capture/processing to try to produce images like https://www.dpreview.com/forums/post/62123971.

I still the have equipment used to create the image at the top of this thread. I think I will give it a run with the cctv video camera next partly cloudy night. I will use Live Stack - that should be interesting as I haven't used Live Stack or that camera since I created the examples for the Sharpcap 2.9 manual. I will capture M42 again and post to the Gallery, weather permitting.

I think astro-imaging is a fantastic hobby - there are no targets, deadlines or limitations. Anyone can do, or spend, as much or as little as they please.

Take note of the comments in this thread from Rob. I, for one, am in complete agreement with his statements.

Good luck with your imaging . 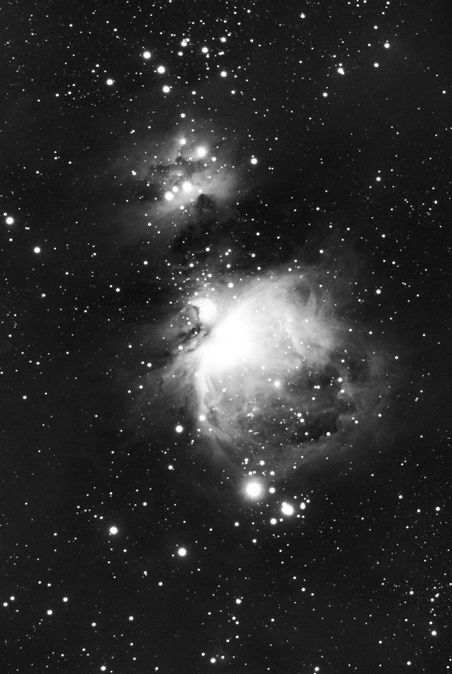 This is a re-processed stack of my image posted Oct 22 in this thread. Same stack but more processing carried out in Siril - specifically Background Extraction. I am badly affected by the light pollution from the Manchester conurbation. The Background Extraction process removes the bad light gradient across an image.
https://www.astrobin.com/370493/E/ 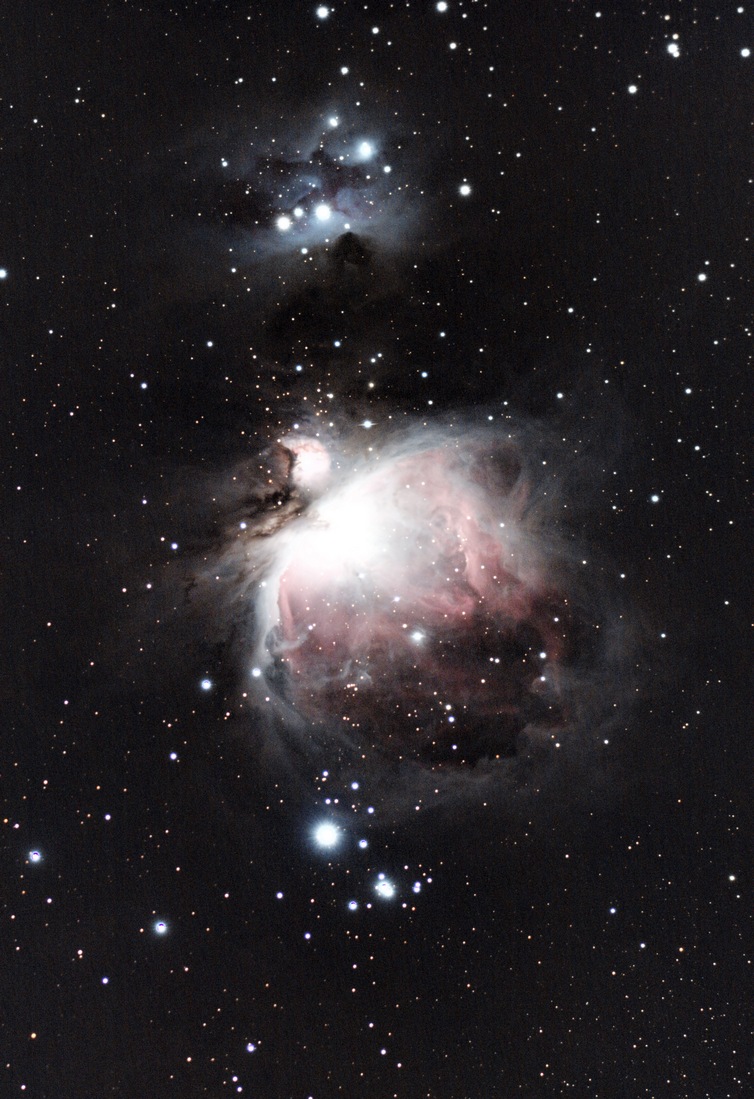 
In Siril
In GIMP
The bright pink is the Manchester side of the image. 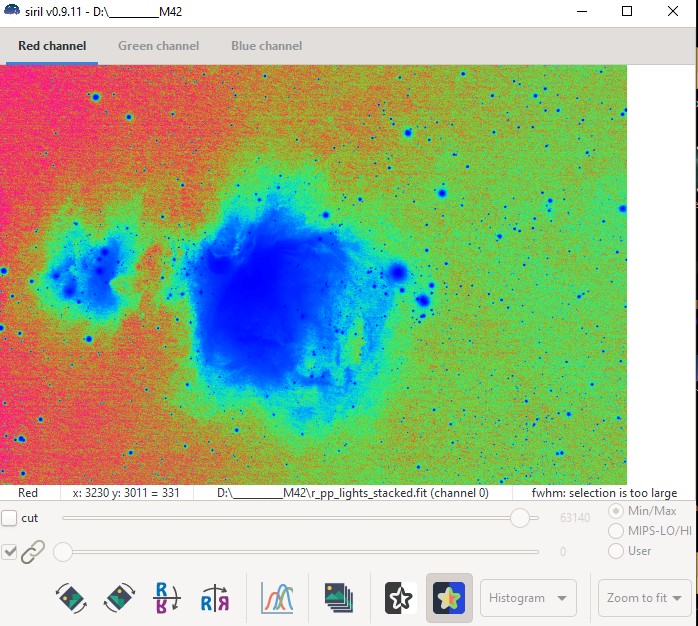 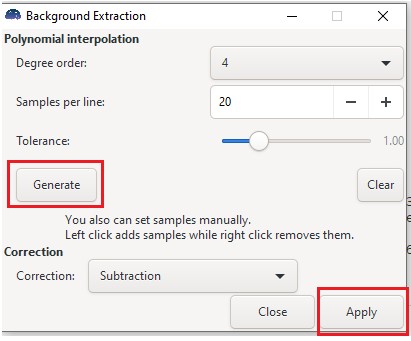 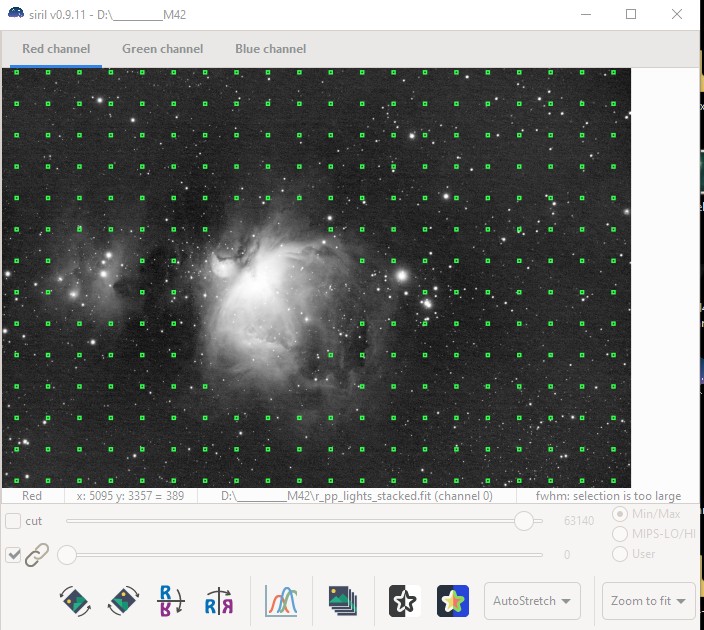 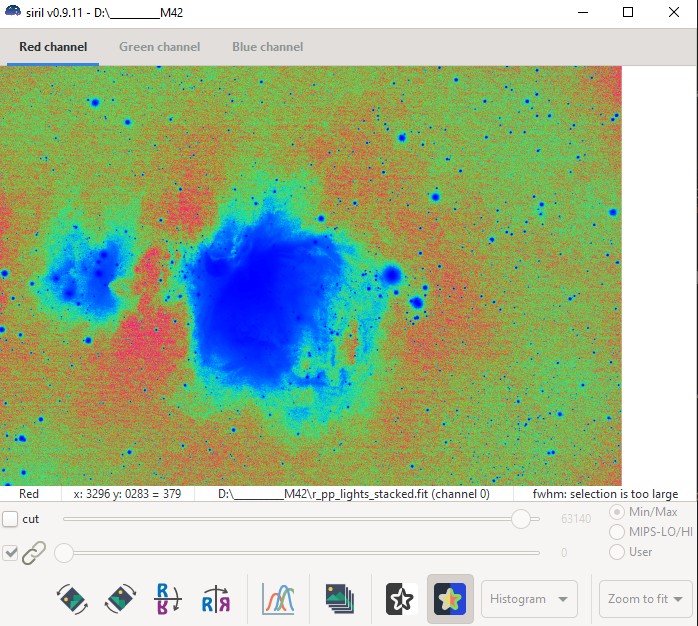 This is the RGB histogram in GIMP. The colour balance came out reasonably ok considering I had to make no adjustments. 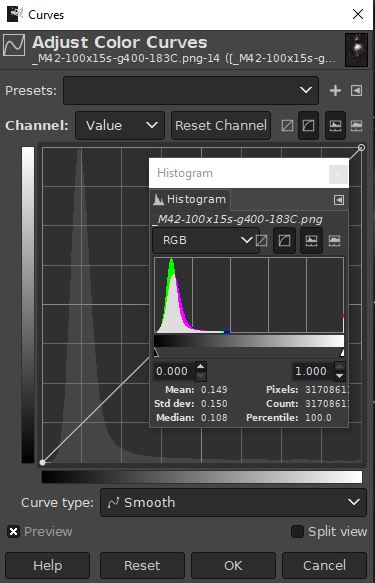 I would hope to improve on that this year as I am now using more calibration frames.

I cropped to leave only M42/M43, with slight adjustment to Colors > Curves in GIMP. Use of Background Extraction has certainly helped to preserve detail and colour. 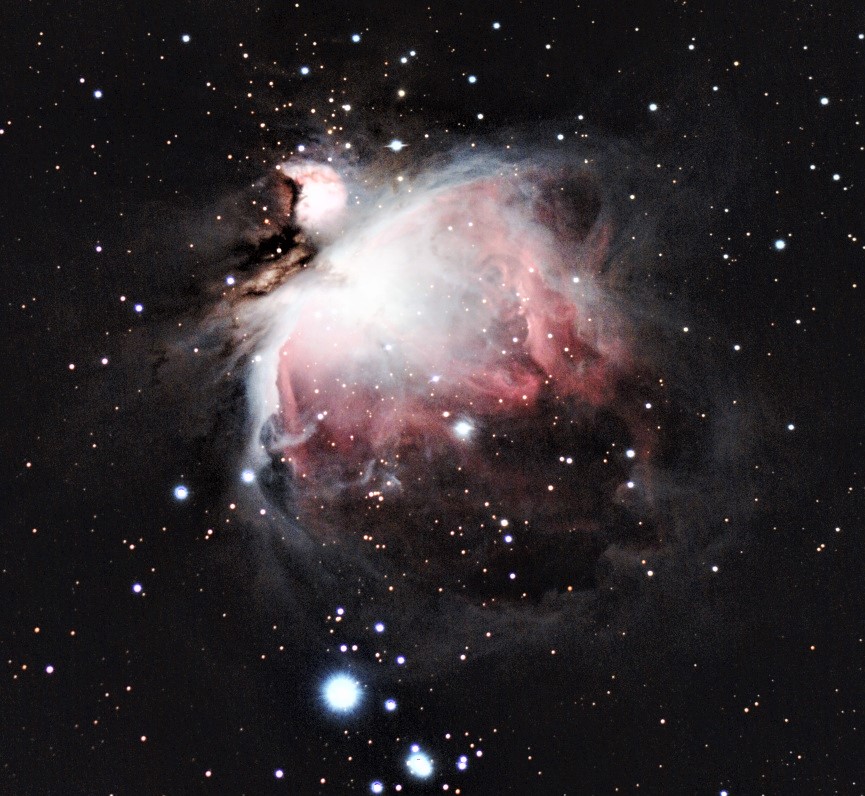 Super thread! keep it up

An HDR composition of M42 + Running Man. 2 stacks [60x60s and 100x4s captured with Altair 66ED scope + Altair 183M camera] were created using Astro Pixel Processor. The easiest method I found to create the HDR combination was a program called Fotoxx which runs on Linux (no Windows version but I will keep looking for alternate software). It was a case of select Combine > HDR, load 2 images and adjust 2 curves after processing completed. The software can combine up to 9 files, which means I can experiment with combining some 120s down to 2s stacks. 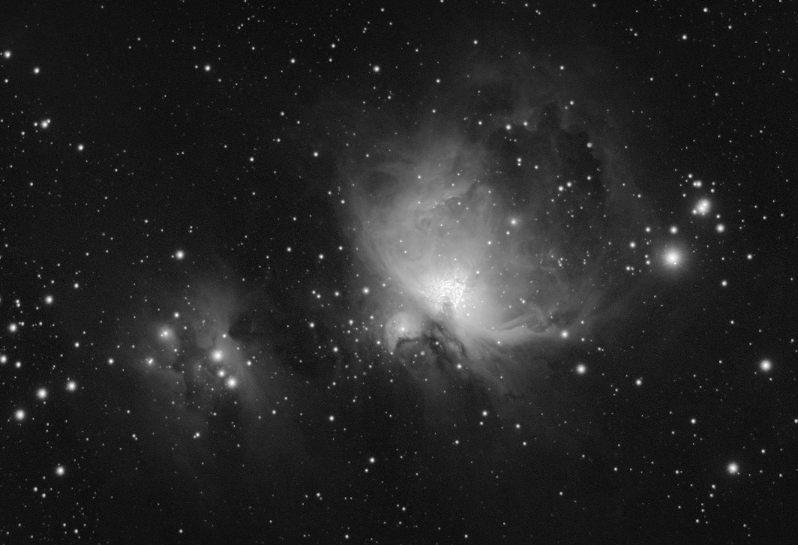 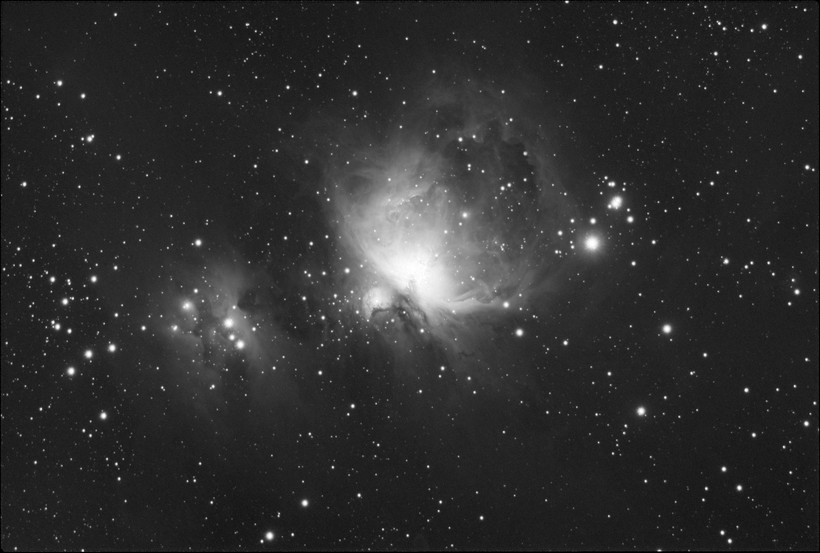 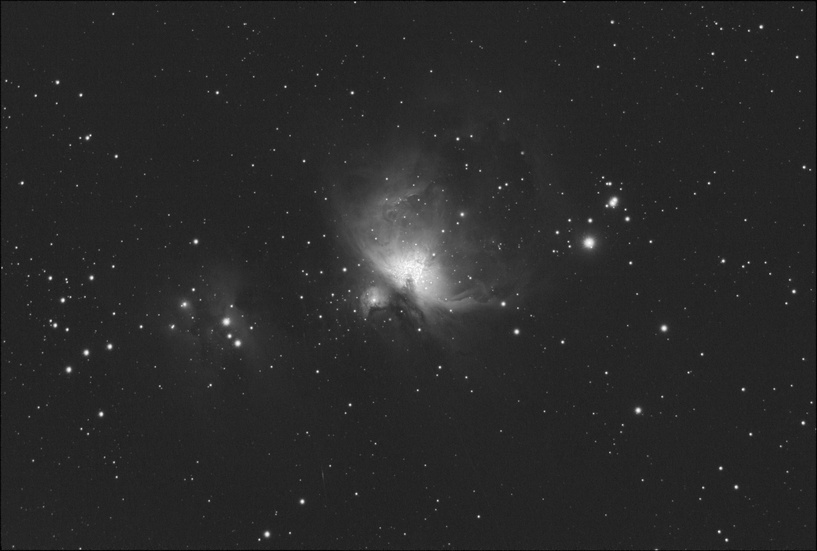 This was Fotoxx in action. 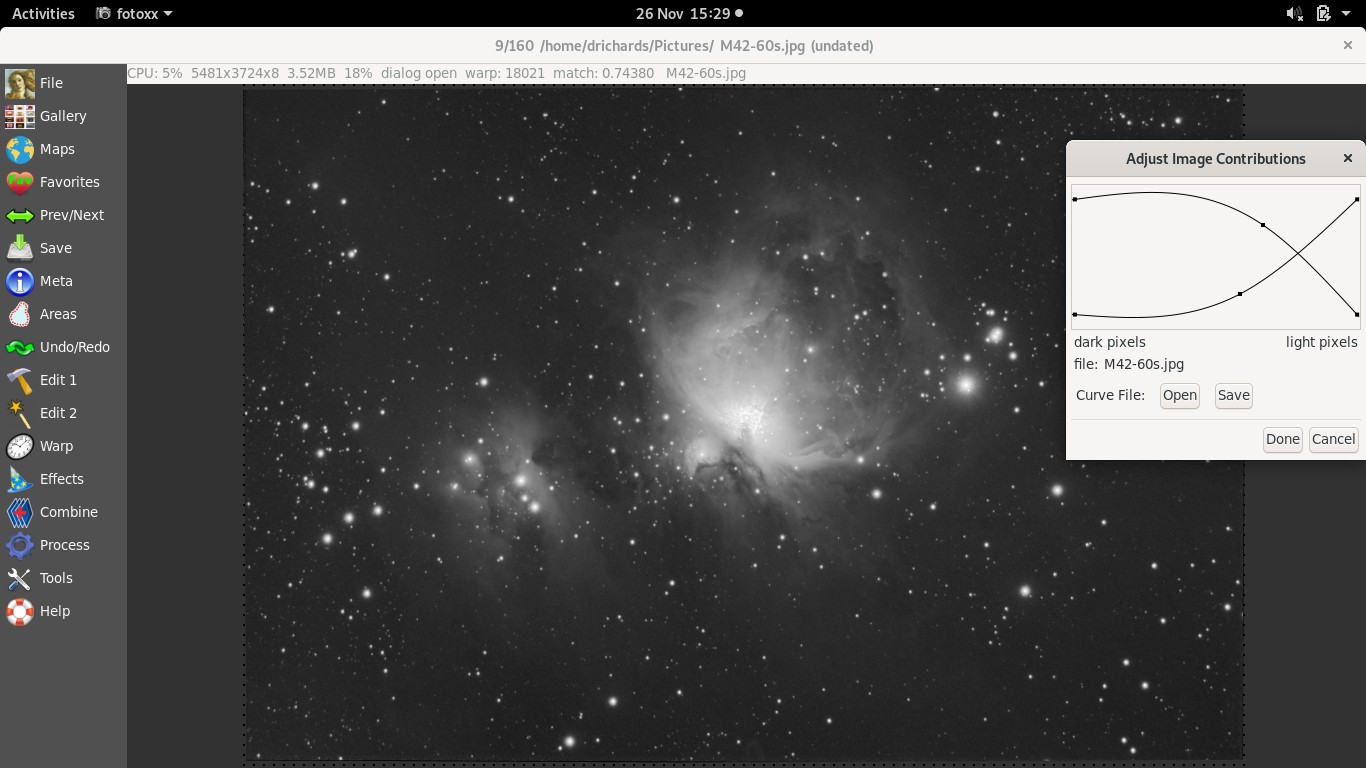 An early 2019 M42 reprocessed using Astro Pixel Processor. The APP website videos have been very useful for learning the software. 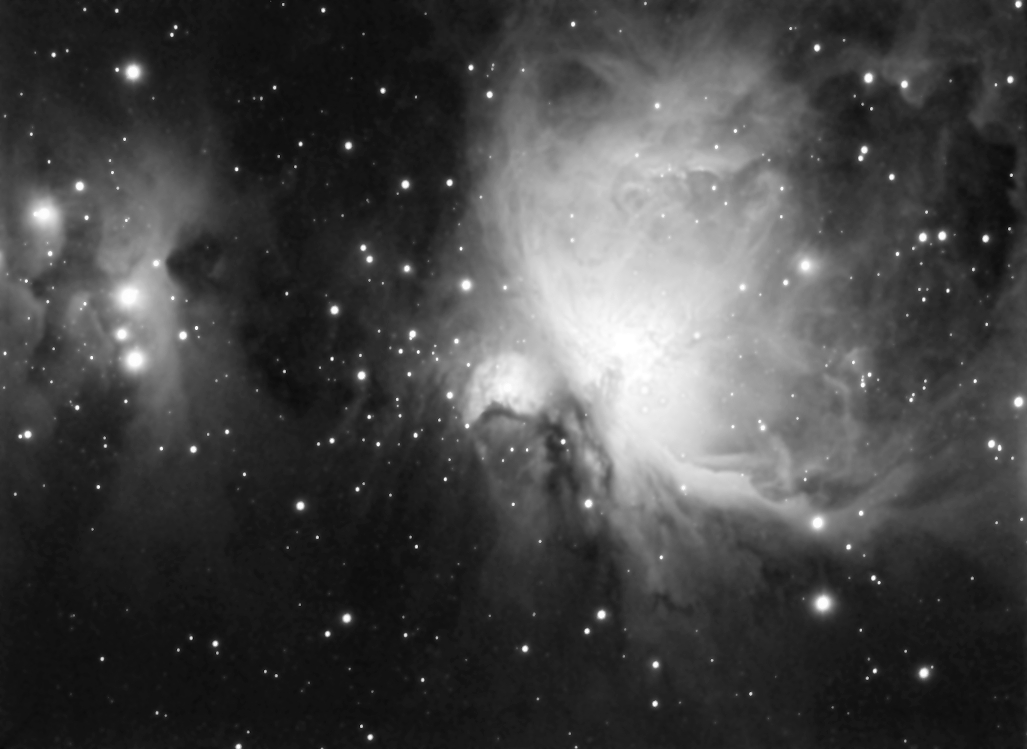 turfpit,
Your first 2008 image of Orion, looks exactly like mine (which is where I'm at presently). From that 2008 image, what was the next step you took that improved your skill. I'm looking for my next step. At first I thought you 2008 image was mine

Thanks for any feedback/help,
Joe
Top

Several things happened:
It should be possible to pick up a decent used camera at a reasonable price as people are always upgrading. If you find something, do a search for the camera on Astrobin and see what images it is capable of. For used kit I use 50% of new price as a guideline. All my gear is second-hand. 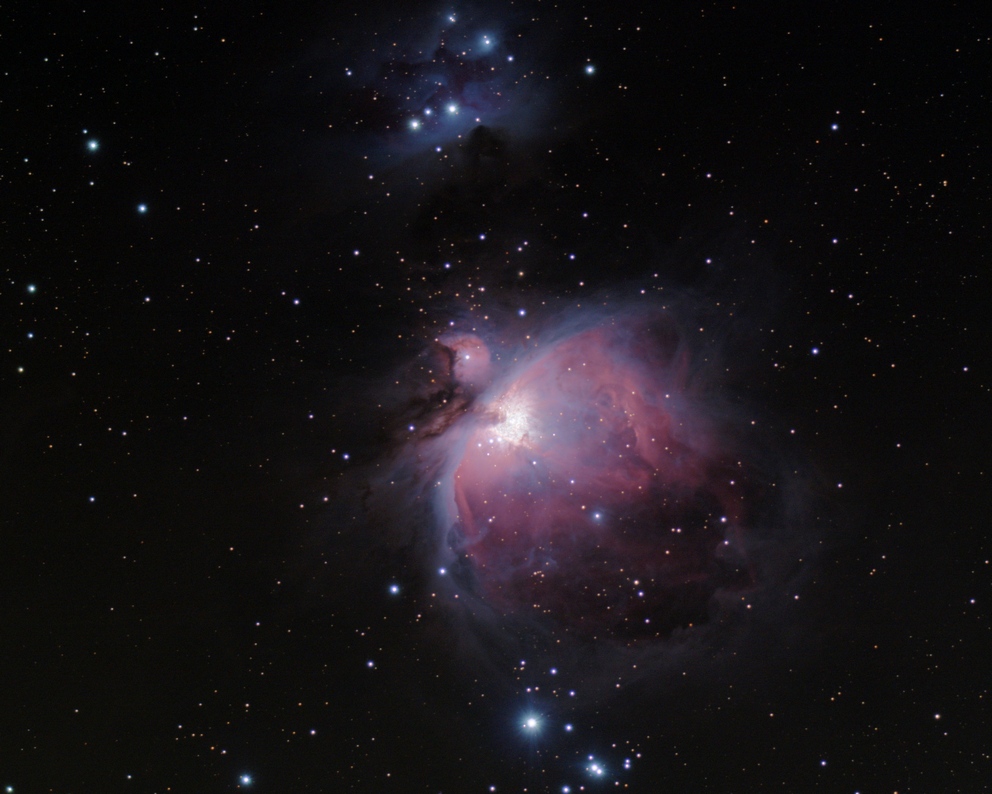 This is a combination of stacks of different exposures. The result of 3 years of struggle. Things started to come together in August 2019 with this M27 https://www.astrobin.com/full/1graw1/0/. This post is the result of a recent re-process of data captured last August (some progress with processing in the latter part of 2019).

Currently I am trying to unravel imaging with a mono CCD camera and LRGB filters.

There is no single step.