Imaging Jupiter: Lots of dots in my images

Thanks for all the useful information Dave and Chris. I've learned a lot about working with PixInsight to handle DSOs in the past few years, but I see now that I have to pick up my game with RegiStax for planetary work. I like the "aggressive" set of parameters. I geared myself into thinking that "less is more" with RegiStax, so I don't think that I would ever have come up with those settings, or anything close to them. I guess I have to change my strategy with RegiStax and be open to other settings. It offers a tremendous amount of degrees of freedom for the user, but the hard part is finding out which works best. I've played around with the settings you gave me just a bit (upped the Denoise one notch on Layers 1 and 6), stretched the histogram just a bit (after working with DSOs, this just seems natural and is now built into my DNA), and then did a bit of touch-up in PaintShop Pro, mainly adding a bit to the saturation. RegiStax can do that, but I think the user has a lot more control on saturation with PSP. I did this to make the GRS stand out a bit more, as its one of my favorite objects in the sky. I've attached my latest figure. It may not be the finished product but its close (maybe just a tad too aggressive on saturation). I guess the dots in the original picture are produced as a result of high gain and turbulence, the latter being a product of the planet being so low in the sky. Looking ahead, Jupiter should get up to about 35 degrees above the horizon next summer at my location, and over 70 degrees above the horizon in 2026, so that's something to look forward to. Rather than wait for these times, my other options are to build something similar to the Hubble or to move south, but those aren't happening. In the short term, Mars should offer a great opportunity in just about 2 months from now, and I'm looking forward to imaging that planet then. Again, many thanks for the help. 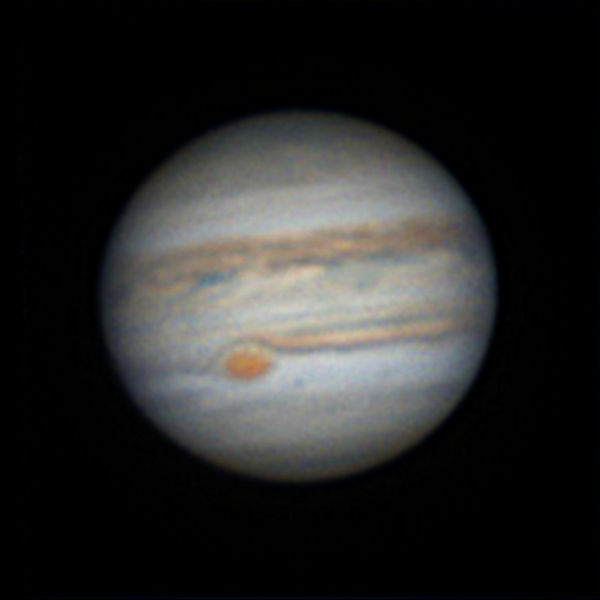 "less is more" with RegiStax

That would be the case for good quality data - high elevation and good seeing.

It looks like you are going in the right direction now.

Nice work, Dave! I noticed you went a different direction from the tutorial you put up a while ago on capturing and processing an image of Jupiter. And the settings for the two versions you did here are quite different due to the use of the linked wavelets checkbox in the 2nd one. Do you have any clues/advice regarding how you got to where you ended up, or is it mainly just trial & error combined with your knowledge and experience?