Our host, Robin, has been gracious by providing us with this forum but I do feel guilty chewing up his storage space with my images. I'll make this the last. I programmed a website for sharing my work with variable stars. Any future posts I make to SC forum I will just include a link so as not to burden Robin with tons of image files. 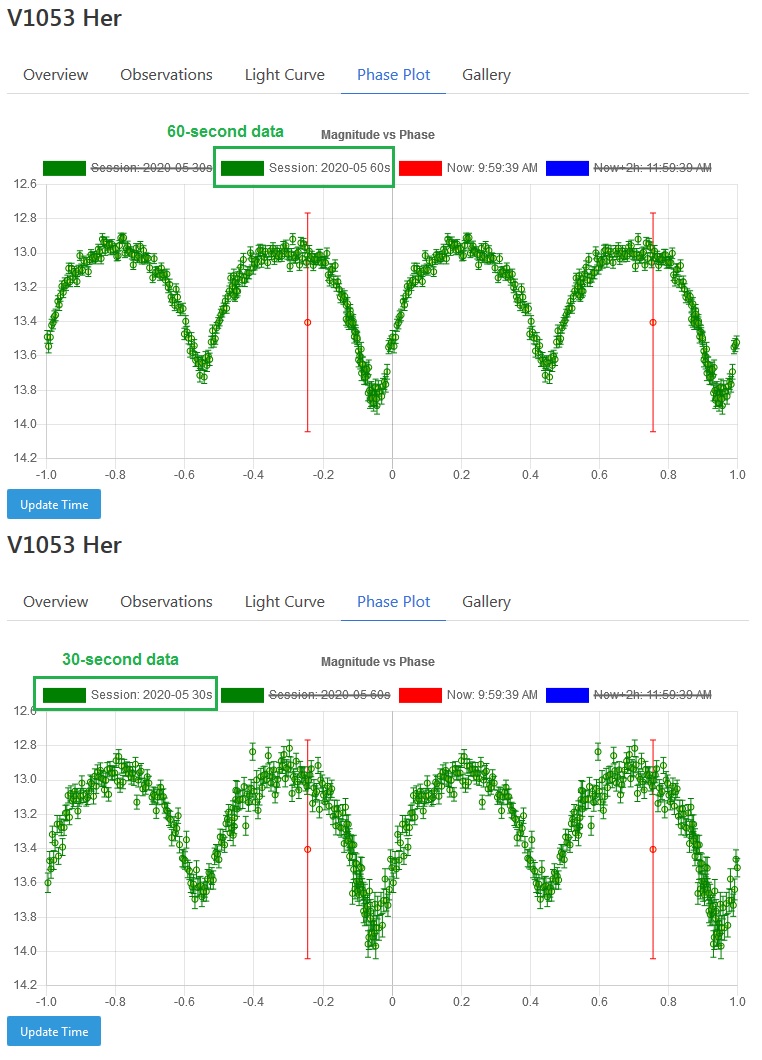 The eclipsing binary system V1053 in Hercules is 13th magnitude that varies around 0.9 magnitudes from crest to trough. One of the goals was to determine a minimum exposure needed to produce satisfactory results. "Satisfactory" is subjective but for now I think that the "60-second data set" is satisfactory. When I captured the image files I alternated between a 60-second exposure and a 30-second exposure for the entire 6.9-hour period. Due to my east-facing only imaging window I had to break it up into three sessions: May 14, 21, and 22. Afterwards I used AstroImageJ to calibrate and align the images, and then to perform differential photometry against a known constant-brightness star in the field.

If one were to look at the light curve taken by professionals you would see a noise-free sinusoidal pattern. Unfortunately the equipment required to reproduce such exceptional results are not within my means. Instead I must settle for a certain degree of noise. Notice that the 60-second plot (the top one) is less noisy than the 30-second plot (the bottom one). Furthermore, notice that there are outliers in the 30-second data set about an inch to the left of the red vertical "cursor". This was part of the last session on May 22. The session started with the Sun only 16 degrees below the horizon, technically Astronomical Twilight, but true darkness arrived only 15 minutes later. The session lasted nearly 3 hours but notice how the outliers persisted for nearly half the session. My theory is that the atmosphere was "boiling" (to borrow a "turfpit" phrase.) The interesting thing is this, notice how the outliers don't exist in the 60-second data set. Here my theory is that doubling the exposure "averaged out" the negative effects of the turbulent atmosphere. I wonder if this has implications for regular AP? I'll have to experiment with stacking two adjacent 30-second frames to see if it mitigates turbulence.

One other interesting aspect to the light curve is that the "primary minimum" does not occur at exactly Phase: 0. I had a theory about this but then I researched it online and discovered that this is indicative of the existence of a large dark body that is perturbing the orbits of the stars: an Exoplanet!

Thanks once again for posting fascinating science on the forums. Fortunately the hosting package I use for the forums website includes unlimited storage, so I don't need to worry too much about the size of uploads. The only reason I restrict them is to avoid a large number of very high resolution image files which would be awkward to keep backed up adequately.

How can I say no to that! I would be honored.