Please share the equipment used and if possible camera settings to help others.
Post Reply
9 posts • Page 1 of 1

Tim's (@timh) work using ultra-short exposures to freeze the turbulent atmosphere inspired me to give it a try. Over the past two nights I enjoyed a good stretch of clear weather. I chose a tough target: M13, a very tight star cluster that benefits the most from Tim's technique.

I haven't got the best equipment like most of you, so if you give this a try you can expect better results. I've got a refractor but it is a doublet. I fell for the manufacturer's marketing that it was "APO-like" due to their use of "ED glass". Don't believe...buy an APO! I learned the hard way that the scope does a poor job at focusing blue light. As a result I don't allow blue light to enter my scope. For luminance I use a Wratten #12 filter; that is Red + Green but no Blue. For color I use a red and green filter. Later during processing I mix the red and green channels into Red, Green, and Blue. It works but sadly blue stars look cyan and red stars look orange. It's not ideal but good enough for government work as they say!

I have two cameras, a CCD and CMOS. The CMOS camera isn't cooled but it has low Read Noise (1.55e-) and small pixels (2.9um). The CCD is cooled but has high Read Noise (5.3e-) and large pixels (4.65um). For this project, I chose the CMOS camera: Altair 290M. Normally I use it for guiding, but now I was left without the ability to guide. I figured that since the exposures are short that I could simply rely on Periodic Error Correction (PEC) of my DIY Raspberry Pi + Stepper Motor of my 50-year old mount. The PEC reduced the uncorrected peak-to-peak PE from 90 arc-seconds to 15 arc-seconds over 8.5 minutes of time. It worked well, but I made sure to capture far more Light frames than I needed.

All of my frames suffered from severe Raining Noise as seen in the attached Wratten #12 stack. According to my calculations I needed a minimum of 22-second exposures to mitigate the Raining Noise problem, but that would have negated the "lucky imaging" objective. Thankfully I was able post-process it out using Astro Pixel Processor (APP). Tim can get away with 3-second exposures due to the fact that he has a substantially faster scope than mine, plus he suffers from more light pollution.

I was very fortunate that none of the stars in the image is saturated, so there is no harsh over-exposure of the central core of the cluster. In this image you are seeing stars as faint as 17th magnitude, possibly 18th magnitude. My star catalog only goes down to 16th magnitude so I am only estimating how deep you are seeing.

The final image, zoomed in and cropped: 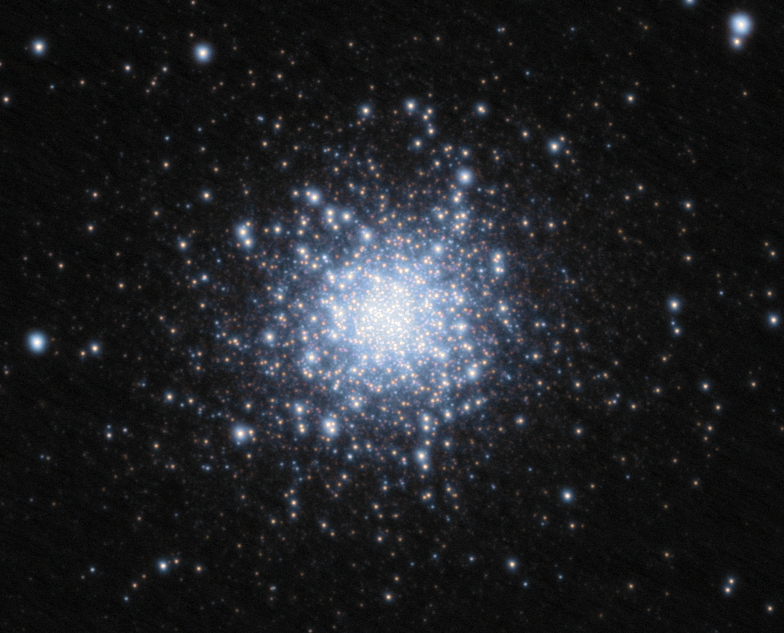 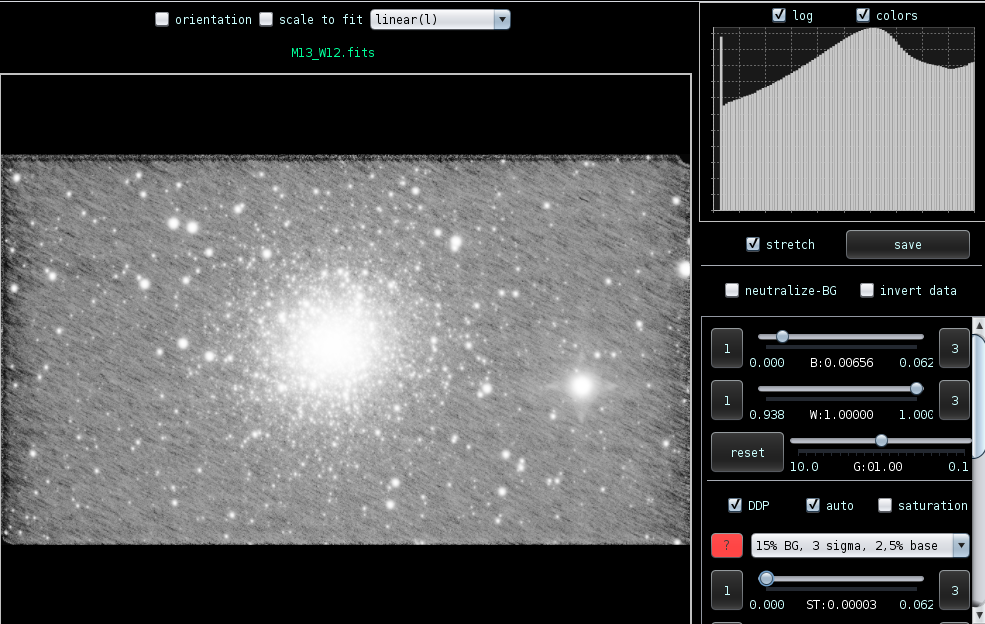 Individual stars at the centre of the cluster - well done.

Nice effort this. The propeller is also showing very well.
I was about to post my M13 capture from 2 nights back. It has a bit different look than yours

Then again: indeed totally other equipment like you said.

Interesting and looks good. The resolution at the centre looks clear and, at the same time, you have kept the stars there bright - so it looks realistic in terms of dynamic range ... the middle is by far the brightest part which is as it should be. By contrast my pictures - and many others - squashed the dynamic range down which shows everything but leads to a rather flat appearance. You inspired me to go back and look again at what I was doing last year during globular season..just for comparison.

I didn't do so much on M13 ... and at the time was working with way too impractically short frames (0.13s) yielding images with a total exposure of only about 30s so hardly any SNR. But it is interesting to see that your resolution of the core with a 71 mm refractor and 3s frames is not too far different from mine with a 250 mm scope and 10s frames -- But yours is the better image because you have decent SNR and dynamic range.

Sampling rate must be important? I thought that by sampling at 0.95 arcsec/ pixel that the best resolution I should expect to detect would probably be limited to about twice that (~ 1.8 arcsec?)? So I also tried sampling the very short frames down at 0.45 arcsec/ pixel. I am guessing that with your 71 mm refractor and 2.9 uM pixels that you are sampling at about 1.3 arcsec/ pixel - so resolution limited to about 2 arcsec ? At 71 mm the Dawes limit starts to come in too -- also about 1.6 arcsec or so also conspiring to set a similar limit. So overall - if you are getting down to 2 to 2.5 arcsec or so then that is pretty impressive and pushing the set up as far as can reasonably be expected? 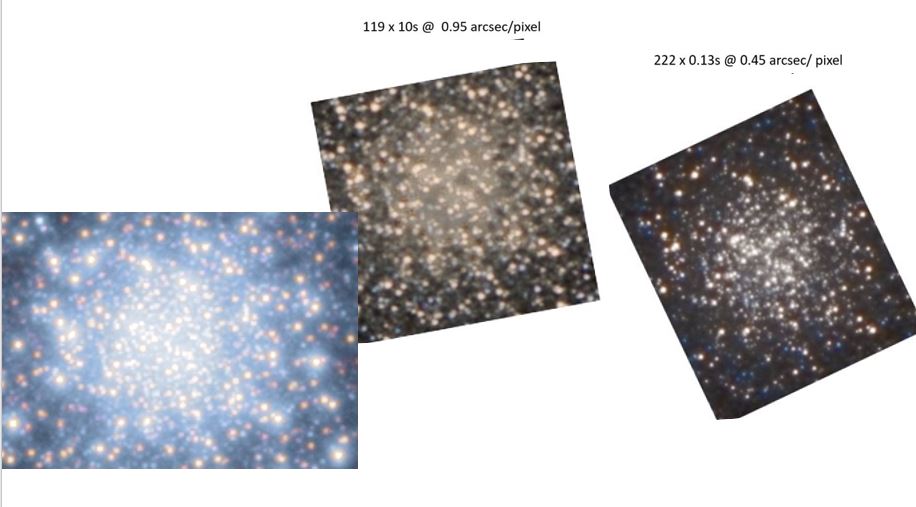 Thanks for your great analysis. I appreciate it.

Yes, pixel scale is 1.43 arcsec. APP reported FWHM between 3.0 and 3.5 at low altitudes (above the horizon) and 2.5 to 3.0 within a couple hours of the meridian. I'd get short bursts of poor FWHM which I interpret as abrupt changes in PE that the PEC couldn't compensate for quickly enough. Then I would get long bursts (up to 2 minutes long) that I believe was related to atmospheric instability. I had APP discard most if not all of the poor performing frames.

I like the image but there is something about my scope that prevents me from getting tighter star discs. Maybe I am being unfair. This is what you get for 71mm!

Dave (turfpit) shared an interesting article by Roger Clark that got me thinking about the role of Darks, so I did a little experimentation with my M13 stacks.

In a nutshell Clark suggested that raining/walking noise can be mitigated by increasing the number of dark frames. I took at look at my stacks and saw that my luminance stack exhibited noticeably more raining noise than the color stacks, but why? It turned out that I had invested 4x longer capturing color dark frames than luminance darks.

When I combined the noisy luminance stack with the less-noising color stacks, I got this: 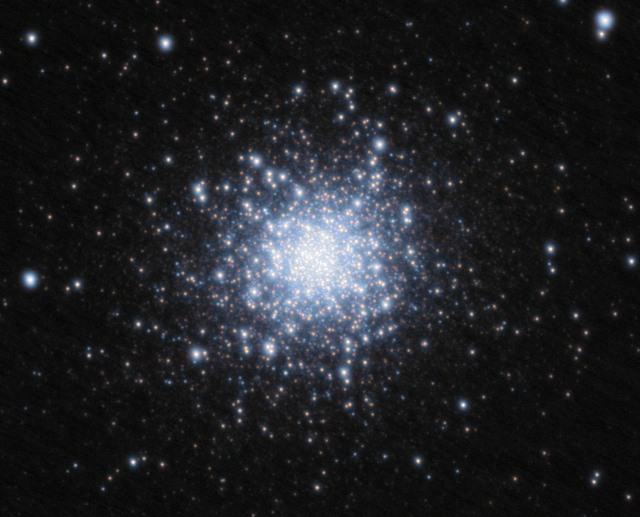 OK, but not great.

Then today I omitted the L-stack and just used color stacks. Here is what I got: 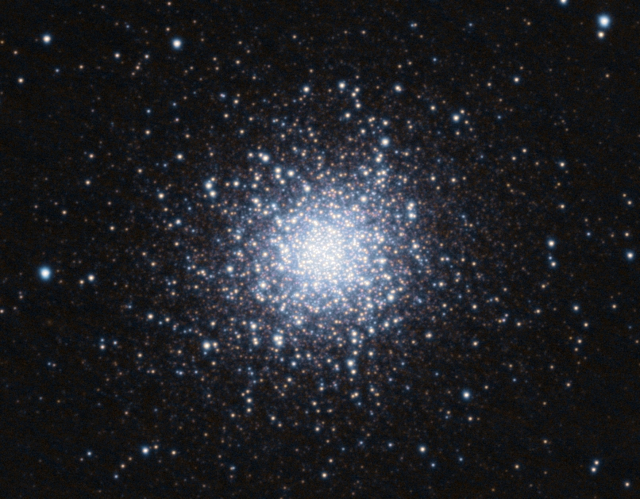 That image is HALF the total integration time, captured in one night as compared to two nights. Also notice that the stars are sharper in the bottom image due to eliminating the noisy luminance stack.

I am beginning to believe that we harm our images by not investing more time capturing darks.

Same with me, 50 darks always works, but what do we do differently? We bake our frames! Raining Noise is a different beast. It comes from using ultra-short exposures. When we bake, we ensure a good SNR in a single frame, so then a stack of 50 is more than sufficient. However, when performing EAA we have a low SNR per frame, so a stack of 50 isn't enough. What is the common remedy? Dither. If you want to dither, then do it, but you can boost your image quality by doubling or quadrupling the number of darks. It's not a great hardship when the exposure is only a few seconds.

With short frames and a CMOS camera -for me anyway- I might be integrating as many as a thousand or so lights. It makes sense that at least a similar number should be used to compile master darks. Suspect that you are right about the raining noise - I do see it sometimes and it will be interesting to check back and check to see if those occasions correspond with fewer dark subs?