I'm happy to add support for an alternate (text based) format if that's easier than the current CSV format. The documented CSV format is just an extension of a simpler CSV format that I was already using for the target list in the sequence planner. I have code that can read co-ordinates in HH MM SS/dd mm ss forma, so decimal co-ordinates are not requried. If it is another CSV format then it would need a header line to distinguish it from the current CSV.

The CSV files are actually embedded into the SharpCap application, so you can't just add a few more entries on the end.

Instructions in this thread say that RA needs to be decimal hours. Is that no longer the case? It would be nice not to have to convert every RA entered to user lists.
Gary
Top

I made a test with a user star in the old manner (csv as described in #3).

An artificial image containing this star was generated with CDC, was loaded into the deep sky camera, solved, annotated: it works very well, see picture.

However, there was the conversion into decimal (used https://www.astrouw.edu.pl/~jskowron/ra-dec/). It will be very good to simplify this.

@Stefan: Good idea to use OccultWatcher. It has already RA/Dec of the star. I think if we have Robin's improvements we will see how it works manually, ideally someone could write a plugin for OccultWatcher. 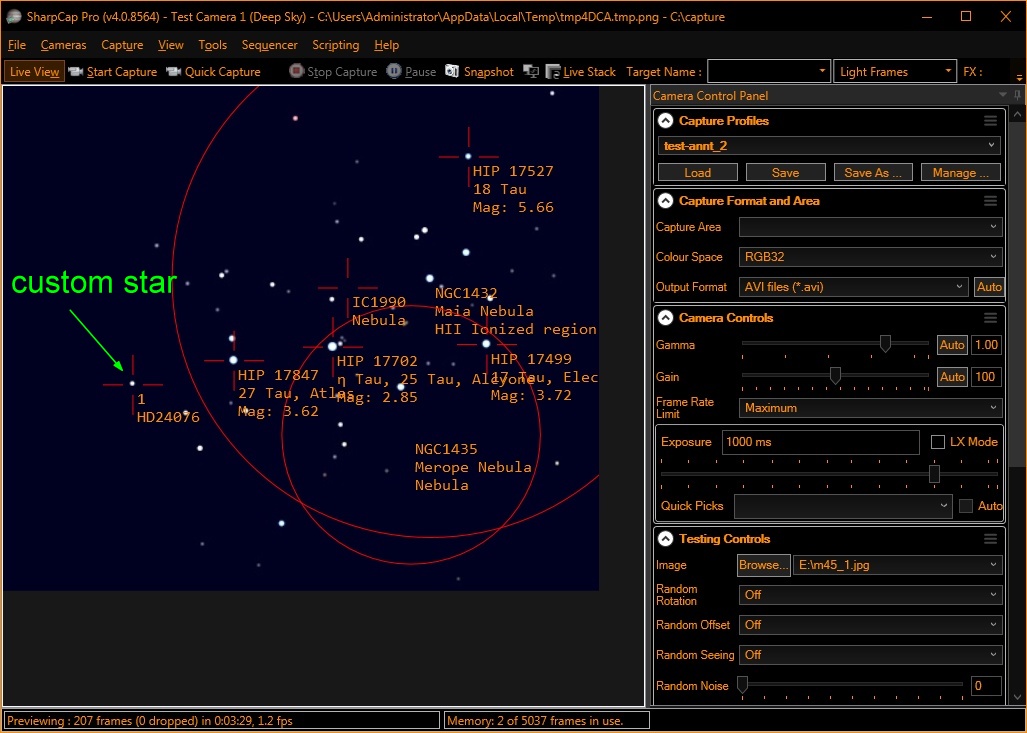 Glad to see it is working as intended

On the co-ordinates, yes, decimal hours at the moment. I am still working on improvements to this functionality for next week - please feel free to continue suggesting further changes/improvements while I do that, then hopefully we can reach some sort of consensus on the best way to tweak this.

on your remark earlier:


admin wrote: ↑Thu Jan 13, 2022 9:18 pm The CSV files are actually embedded into the SharpCap application, so you can't just add a few more entries on the end.

I was referring to your comment that a CSV file that is stored in C:\Users\<your user name>\AppData\Roaming\SharpCap\AnnotationCatalogs will be read by SharpCap, so my suggestion was that a third party application like OccultWatcher could create a CSV file there or add an additional line in an existing CSV file.
Or did I misunderstand the whole concept?

The additional ones are in the folder. You can make changes to the additional ones as you like, but currently SharpCap only loads them once (the first time you access the tool after starting SharpCap). Any changes made after that point will not show up until you close and restart SharpCap

Robin, this feature is absolutely spectacular.

My only question: is it possible to change the font size of the annotations?
Top

Apart from the promised basic improvements

, here are some more (more cosmetic) suggestions:
> a hint in cases when there is no object to annotate
> choose to show default and/or own objects
> snapshot including the annotations

thanks for the suggestions - I was wondering about a different colour for custom objects, but filtering is a possibility too. I like the 'nothing in view' hint idea.

do you want the ability to adjust the font size dynamically yourself or are you just saying that I have made it too big/too small in your opinion?