I was taking some video captures of Jupiter and Saturn last night and out of about 10 captures, only one AVI file seemed to work when I played it. The other nine captures all come out as black when I play the AVI.

I have never seen this before and lesson learned after taking the capture of the video, is to immediately make sure that the capture is good. What's strange about this problem I was able to watch the other captures while I captured the planets but when I play the AVI file, all I get a black screen with the correction amount of capture time. Could there be some kind of corruption in 9 of my AVI files?

I don't recall for sure but I might of tried using my 2X barlow for the ones that failed put I could see the planet centered in the window while I captured the video.

I did not have this problem when I tried Firecap.
Top

certainly not heard any other reports of issues like this with AVI files. In order to track this down we will need to know some more information – including what camera you are using, what the camera settings were and ideally to see a copy of one of the black AVI files - it will be too large to upload here, but if you can put it on a filesharing website like dropbox and share the link here then that would be great.

Will do. I have the settings and the AVI images. Do you want to see the one AVI that worked or just one of the bad ones?
Top

one of each (working, bad) would be ideal if it is not too difficult.

I just noticed on the AVI files that did not work there is no length posted on the windows directory where as the one that worked has a length.
Top

where there are any errors when you are saving the files that are blank? I've seen a couple of issues previously where due to some error (perhaps disc space running out) the AVI file was never closed off properly inside SharpCap. That means that the image data is all there inside the file, but the index blocks that list the number of frames and where they are in the file a missing. I have a tool that I have written in the past to rescue AVI files in this state. (You can find and download on this thread, but it will only work on 1280x960 resolution files - viewtopic.php?t=625 - if your files are another resolution then let me know...)

I had another frustrating night trying to capture Jupiter and Saturn. In some the videos, I can now faintly see the planet if you look very close. It does not look like that while I am actually doing the capture which is very strange. I have only been able to produce one good video of Jupiter from earlier in the week and it turned out fantastic after doing some post processing with PixInsight.

Last night I was able to get a few good videos when I used the 'SER' format instead of the 'AVI' format and I will upload of few of those to one drive.

I had success again using Firecap last night on Saturn. I don't know if I changed some kind of setting accidentally but I have been using Sharpcap Pro for planet imaging in the past and I have never seen this before.

I am going to start sending you my good Jupiter and bad Jupiter along with settings that we used.

I have many more examples but I don't want to flood you.

PS I did take a look at the CSV file on the bad video and I can see that there are alot of 'zeroes' compared to the good one.

I am trying to figure out the best way to get these large files and I do have One Drive.
Top

Here is the One Drive link to two different sessions with six files. The good one is Jupiter (AVI file) and the bad one Saturn (SER file).

I created a folder for you called 'Robin' on my One Drive.

You can see Saturn in the SER Video but it's poor an all of my AVI's (except for the good one) I just get a black screen.

Let me know what you find.
Top

I also wanted to mention that I recorded these videos on a external SSD drive if that makes any difference and I did not think of trying it directly to my hard drive because I am hurting for space.

But remember they very first AVI file that worked was also recorded to this external hard drive.
Top 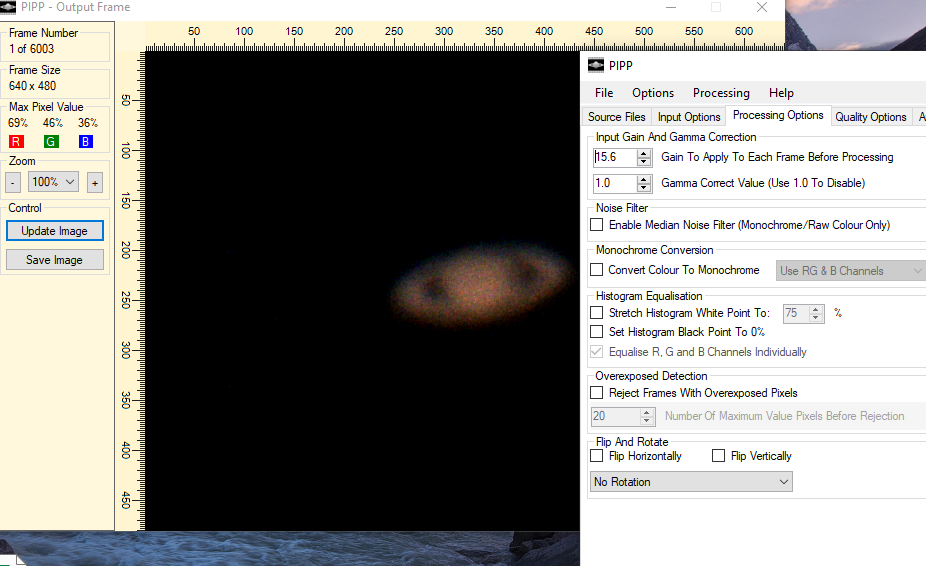 Looking at the capture settings file that you also uploaded, I can see that what happened is that you were using the stretch functionality in the mini histogram to brighten the image at some point and you forgot that that was enabled – that made the image look fine on screen but of course the saved image doesn't have that brightening effect applied to it. In effect, because of that you unfortunately underexposed quite significantly

I also noticed that your SER file of Saturn was in RGB format – you would be better to capture in raw format for planetary imaging - for one thing the capture files are three times smaller, but also you can use more sophisticated debayering algorithms in the processing stage than the simple ones used by the camera drivers when capturing and RGB.