* Version of SharpCap
* Camera and other hardware being user
* Operating system version
* Contents of the SharpCap log after the problem has occurred.
[If SharpCap crashes, please send the bug report when prompted instead of including the log]
Post Reply
14 posts

Hi the camera I have does not have ‘s’ at the end. I bought the camera this month (November). It says on the box that it can be used for guiding as it has a guide port.
Top 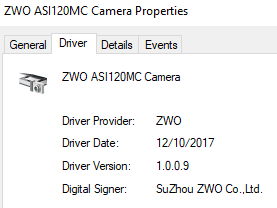 Also look on the tab SDK & Upgrade Tool and download ASI Cameras Firmware Upgrade Tool for USB2. The firmware upgrade should be done over a USB2 port.

I have just been through all this.

If possible, try all this and use the camera on an alternate machine.

There is little else to do except perhaps get the camera refunded or exchanged as it is less than a month old.

Hi guy's, I have the same problem as described using the zwo ask 178mc,, was driving me crazy,
Not got it long and weather holding me up to test more.
But using it on USB 3 port on my laptop it done as described, I was using a USB extension 3mtrs and problem appeared, I thought it was the extension and removed it,, problem appeared again, I changed off the beta version of sharpcap and problem appeared again,
Swapped to a USB 2 port and it seems OK,, by this time I was frozen by the cold and packed up.
Hopefully get more testing soon,,
Hope this helps
Heq5 pro, eq3 pro, allview,az gti,etx80, eq3,az3
Sw explorer 200p D's, ed80 pro, star travel 102 etx80
2 canon 600d, modded 450d, qhy 5ii c , Samsung scb2000, scb2001, watec 902h,Phil dyer camera.
Camfi
Eqmod,CDC, hitecastro focus, byeos, astrotoaster
Top

This is what I would do if practicable but YMMV. I would get the equipment set up indoors and carry out some testing using all the USB controlled equipment in your setup. I have found that being cold is not conducive to clear thinking. I have a wide angle meteor lens and
small tripod, that way the telescope is not needed as the lens can be attached directly to the camera and this arrangement is good enough to enable capturing a tree, chimney or other object. Start with camera plugged directly into a port and gradually add in other kit/cables.

There are more systematic ways of looking at this which I can post if you need more.