A place to report problems and bugs in SharpCap
Forum rules
‍

If you have a problem or question, please check the FAQ to see if it already has an answer : https://www.sharpcap.co.uk/sharpcap-faqs

* Version of SharpCap
* Camera and other hardware being user
* Operating system version
* Contents of the SharpCap log after the problem has occurred.
[If SharpCap crashes, please send the bug report when prompted instead of including the log]
Post Reply
11 posts

When I load up Sharpcap 3.2.5986 Pro (SC) together with Stellarium Scope (SS) and Stellarium planetarium (SP), SC does not recognise the Skywatcher (SW) mount and even if SS and SP are running or not. I use ZWO cameras (ASI 120, 290, 294) all run well in SC. Noting that SS and SP are able to control the SW mount which carries both a 150mm reflector and a 180mm Maksutov Cassegrain separately. I have no issues with SC running a filter wheel and using the focus aid whilst using the cameras. However, SC does not allow mount control from its righthand side control box (see fig.3). The laptop is a Toshiba Satellite Pro L50-B, X64 based PC with 8GB of ram and 1TB of SSD disk space and OS is windows 10 Pro build 18362.295, with 2 UBS 3 ports.
The laptop (PC) is connected to the SW hand control (HC) synscan version 04.39.05 via a USB 3 to serial cable. This cable allows the SW mount to be controlled with SS and SP running the positioning and guiding from this software. Also note, see (fig.9) for com port identification etc. This suggests that the cable and connection are correct, as it was also used to update the firmware to the SW HC and mount with no issues apparent.
The EQMOD ASCOM (EQAS) mount driver appears anywhere on the PC screen as a second toolbox the SC mount toolbox (see fig.3). This EQAS driver has no control in manual or other, of the SW mount. But if the SW HC is set for PC control only then the EQAS driver will record, track and drive the mount but there is no SC control (see fig.8). The EQAS is connected with the connect box in the SC toolbox and can be parked from this toolbox as well. These the only actions that SC toolbox can perform.
I have played with following settings baud rate, from 9600 to 115200 with no success and back again. Down loaded SW synscan relay 4.41 firmware again no success. Checked the RPC and it was running and on auto. Changed to differing com ports again showing no mount control. Attempted using different drivers in SC, it appears only EQMOD ASCOM HEQ5/6 driver works with SW HC on PC control only but not SC. I have included an ASCOM trace (see fig. 7).
I would like to perform plate solving and concentric search for out of frame objects using SharpCap Pro. I need some help or directions to overcome the above mayor problem. Noting that Stellarium scope can control the mount without trouble. Maybe Admin can advise me as well. My instinct tells me that windows 10 pro is having an effect as I have approached QHY stating that their driver for polemaster is ineffective in windows 10 pro. They were able to rewrite a new driver immediately to run in windows 10 pro.
I have included screen shots that may be beneficial in identifying the problem.
Fig. 1 is the available mount drivers in SharpCap
Fig. 2 is SharpCap displaying the mount control box right hand side of the screen
Fig. 3 is SharpCap screen showing both the EQMOD mount toolbox and SC toolbox RHS
Fig. 4 is screen displaying full EQMOD mount toolbox
Fig. 5 is full screen with Stellarium planetarium
Fig. 6 is SC and Stellarium running in the background
Fig. 7 is displaying ASCOM trace
Fig. 8 is displaying coordinates of the park/home position when SW HC is set to PC control only (celestial south pole)
Fig. 9 is the device manager showing com port etc.
Fig. 10 is the EQMOD ASCOM and ASCOM SETUP 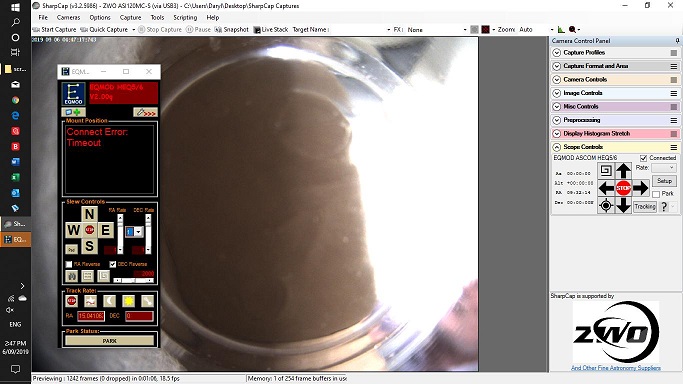 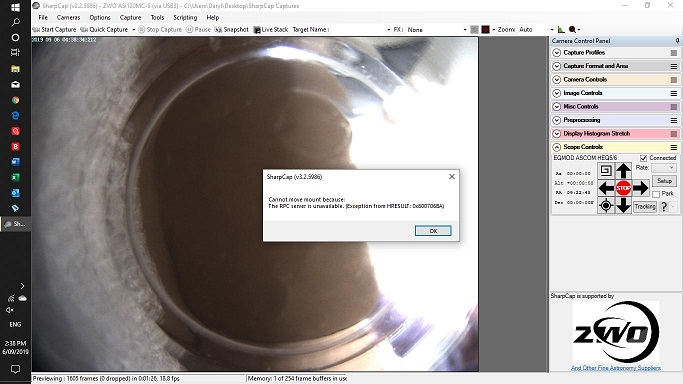 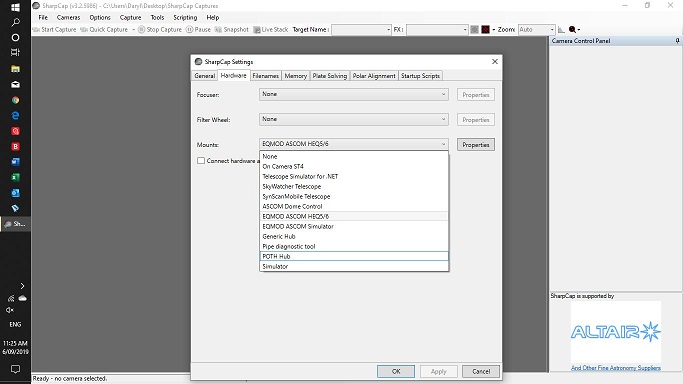 It looks like some of your images and attachments may have gone missing – there may be a limit to the number of attachments you can put on a single post.

This setup of using the EQ Ascom driver with a SkyWatcher mount should work correctly – I use it personally with my NEQ6, so it is probably a configuration issue somewhere. Sadly EQAscom is complicated enough that it can take a while to find this sort of issue.

Looking forward to seeing your other attachments when you get a chance to repost them.

Added another 3. it appears that 3 is the limit per post 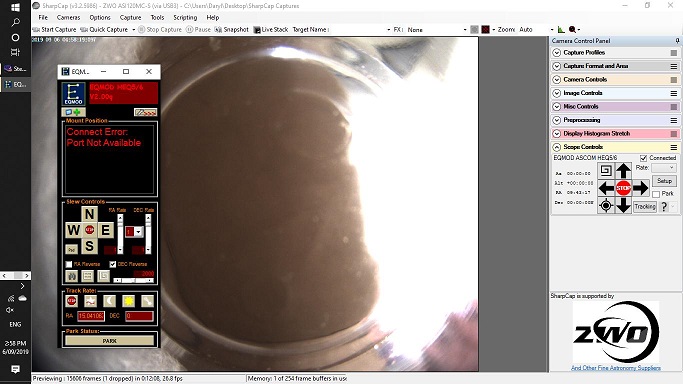 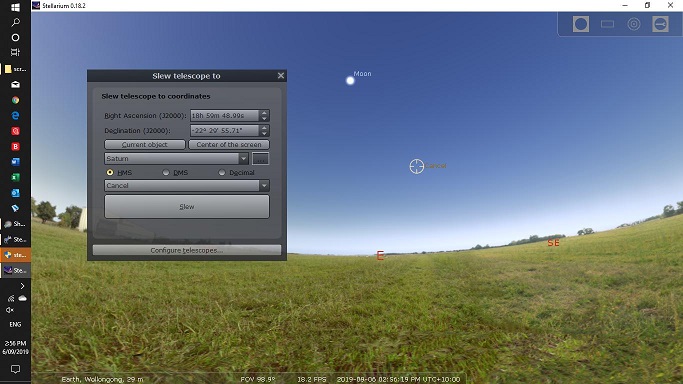 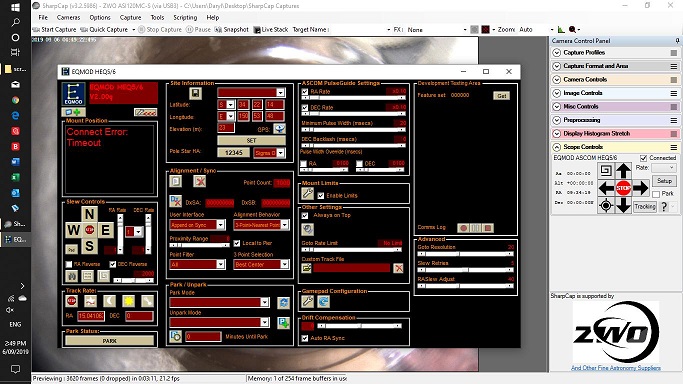 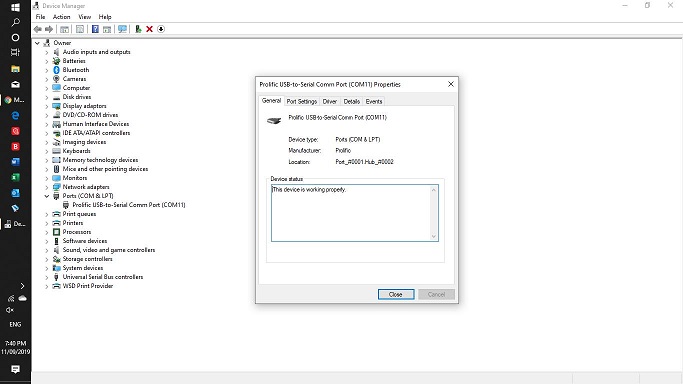 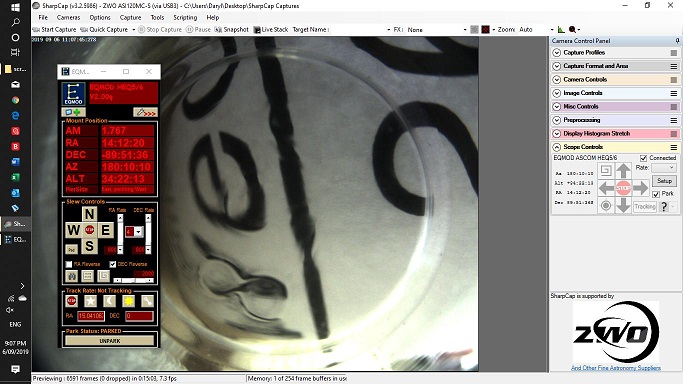 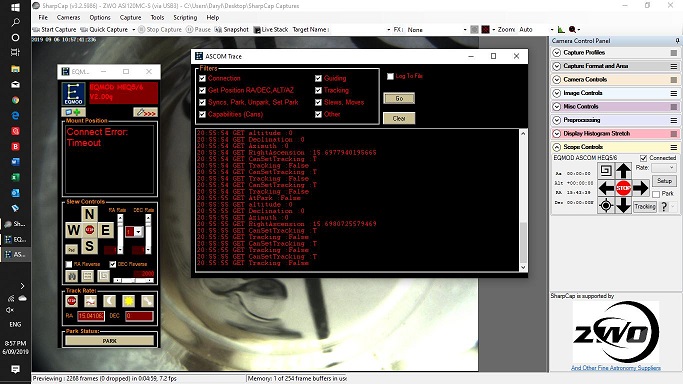 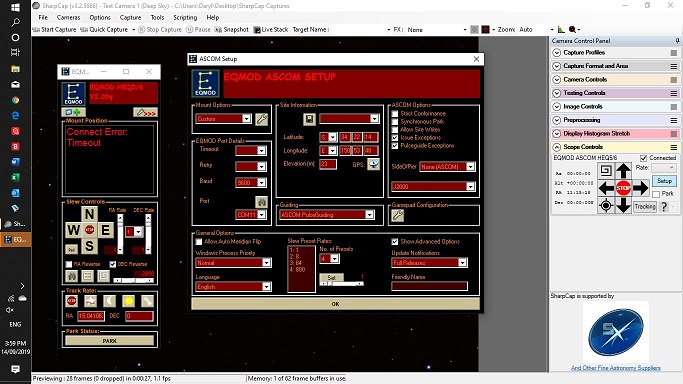 I have attached the SharpCap log which may throw some light on the issue.

Looking through your screenshots, most of them seem to be showing a timeout error in the EQ Ascom window indicating that communication via the serial port isn't working correctly. The only one that doesn't show that error is the figure 8 image, which shows correct communication but the movement buttons are disabled because the mount is parked. In theory undertaking the 'Park' checkbox should then enable the movement buttons.

There is sadly nothing in the log file that you posted that helps track down the problem. I will have a new version available shortly that has additional logging in the Ascom mount code when the verbose logging option is switched on which may help track down more details of the cause if you can retest using that it becomes available. In the meantime you need to try to track down what is causing the communication problems that lead to the timeout error as that is going to be purely related to the software/hardware configuration of EQ Ascom and the mount. Once you have that working reliably with no timeouts you may find that other problems begin to resolve too.

I have replaced my profilic USB to Serial cable with a FTDI cable hoping that it would solve the problem of sharpcap not connecting to the ascom driver when using the CdC planetarium. It pinned a screen shot of the result, a "Connect Error - No port". I double checked the ports for both device manager and properties of the ascom driver, both were #11 as I have set. The first EQMOD driver is for the CdC and the 2nd SharCap, in the screen shot.
Again I ask "what is happening" tried using the POTH hub no success and again the generic hub no success.
I have a work around as follows; load CdC and connect the scope followed by SharpCap but not connecting to scope mount. Using CdC slew to object and then quickly disconnect and reconnect through SC. Here I would plate solve and syn scope. Disconnect SC and reconnect CdC.
As you would guess this is a real pain in the butt.
Does Admin have any further to add? and why the two driver window boxes? 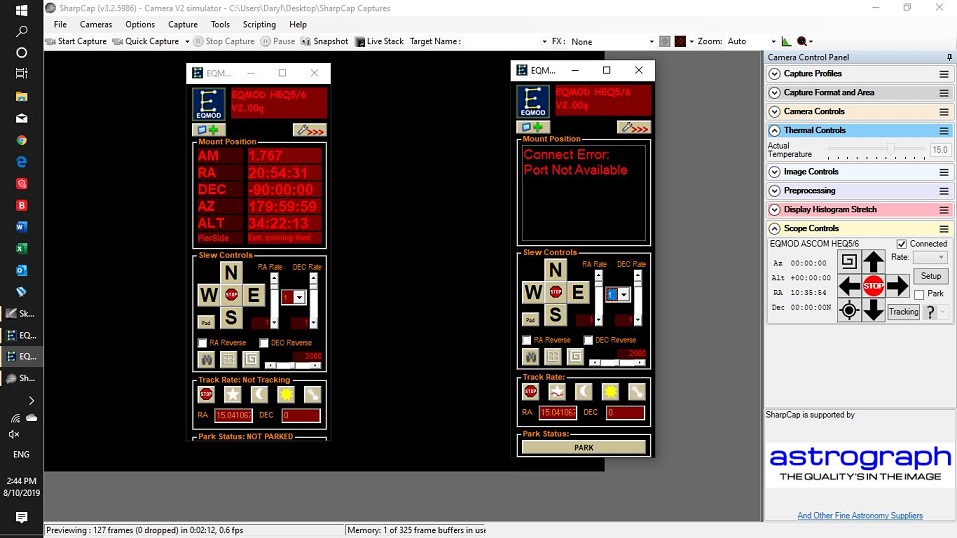 Note the RA and Dec are for the southern hemisphere at 34 latitude.
Top

The thing that is really surprising about your last screenshot is that it is showing two copies of the EQ Ascom UI. That shouldn't happen. You should only get one copy of that window even if multiple applications are talking to the Ascom driver. If we find why there are two copies then we have found the problem I think.

Do you by any chance have CdC set up to run as administrator? That's the only thing that I can think of that might cause this sort of problem since that would mean that CdC would start an administrator version of the EQ Ascom driver, which SharpCap wouldn't be able to talk to as a non-admin application.

Thanks Robin,
Your solution for running in administrator mode was correct. I subsequently ran both software apps in admin mode. Success, success after several months of frustration, hair pulling and cursing. Both programmes ran the mount run during the day on a dry run. It was such a simple solution and very obvious now.
I'll wait for the next clear night for some astrophotography, fingers crossed.
Top
Post Reply
11 posts