ADC alignment is a new feature in SharpCap 3.3. It's a relatively simple feature that gives you some guidance on how much adjustment you need to make to best use your ADC (atmospheric dispersion corrector) to align the R/G/B colour channels when imaging.

SharpCap's ADC alignment tool is designed to help you when you are planetary imaging – it measures the centrepoints of the image of the planet in the three different channels (red, green and blue) and then displays that offset both as an overlay on the image and in graph form so that you can see the results of your ADC adjustments.

To get started, simply get your planet into the field-of-view and in decent focus and then choose the 'ADC Alignment' option from the tools menu.

All you need to do now is to adjust your ADC to make the red and blue lines disappear (or at least make them as short as possible) to minimise the the effects of the dispersion on your image. More on how you might do that later 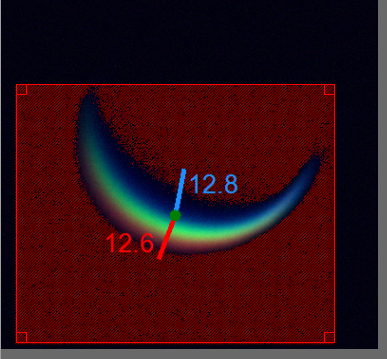 As well as being able to see the current amount of offset between the different colour channels in the image overlay, you can also use the graph that will appear at the bottom of the screen to see how your adjustments have affected the amount of colour dispersion present in the image.

The graph will gradually fill up with measurements (you can control the number of frames that contribute to each measurement to both limit the speed of the graph and to reduce the effects of noise). You should be able to see the results of your ADC adjustments appearing in this graph.

You also have a couple more options that you can adjust in this area.

Firstly, you can adjust the black threshold level that is used when analysing the image – areas of the image that are below this threshold will be shaded with red lines and are not included in the calculation of the centre of the planet. You should make adjustments to this threshold to bring the red shaded area in close to but not quite touching the edges of the planet.

Secondly, if you have turned on the area selection tool and draw on the area box around your planet, you can enable the checkbox to track the object by moving the selected area to keep the planet in the middle. This should give you more consistent results, but remember that it won't actually move the telescope, so will only work as long as the planet stays within the overall field of view of camera.

Now onto the question of how to actually make the adjustments. If you already have your ADC aligned on the correct axis, then it simply a matter of adjusting the amount of correction to minimise the lengths of the red and blue lines which will bring the three colour channels together. If you haven't got the ADC axis correctly aligned yet then it may be a good idea to set a middling value for the amount of correction on the ADC and then rotate it gradually through 360°. The correct alignment should be at the point where the measured dispersion is smallest (that's the point where the correction coming from the ADC is opposing the dispersion being generated by the atmosphere). Once you found that point where the measured dispersion is the smallest you should have the alignment of the ADC sorted out and can then adjust the amount of correction.

One more thing to note is that you should also be able to use the ADC tool when focusing on a bright star rather than a planet – just set the selection area to limit the measurements to the area around the Brightstar of interest. 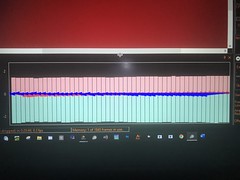 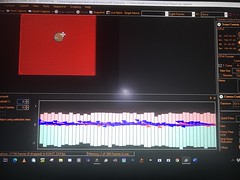 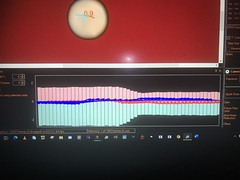 Hi Robin
When observing Mars, I used ADC tool to adjust the corrector. Above are three screen shots of how well it went. All show short arrows and yet they all look different. The top left appear to be the best because of the consistent short arrows but the rectangular bars above and below are long especially the blue bars. On the other hand, the lower left photo may be what we are aiming for, that is shorter rectangular bars. Why do the blue bars appear longer than the pink bars? What are we aiming for and out of the three photos, which one would you choose and why?

basically, you're aiming to get the numbers and the arrows as small as possible. The blue number at the blue Arrow indicate the distance that the centre of brightness in the blue channel is from the centre of brightness in the green channel. The red number are narrow indicate the equivalent value for the red channel versus the green channel. If there was no dispersion at all, then the numbers would be very close to 0 and the arrows even show. Note that the values are in pixels.

The graph at the bottom just shows a history trace of the different values that you see overlaid on the image. In the bottom image of your three screenshots, you can see that you made an adjustment about half way through the graph that seems to have reduced the length of the arrows (and therefore hopefully improve the ADC correction). If you deliberately put your ADC to a silly setting then you should get very large numbers and very long arrows and big bars on the graph.

As to why the blue and red arrows are different lengths – I think it comes from a lot of different causes – for instance how the dispersion changes with wavelength may not be linear, and the wavelength differences between the past peaks of the three different colour filters will come into it as well.

Thanks for your explanation. Just for clarification, the lower left graft show basically the same length of arrows throughout but the only difference lies in the length of the vertical bars as we move towards the left part of the graph, even though the arrows look slightly longer and less superimposed than the graft shown above. In the upper left graft the arrows are actually smaller and more superimposed but the vertical bars are all the same long length. It appears that you prefer the lower graft because of its shorter vertical bars. Therefore can I conclude, it is not only the shortness of the arrows we are aiming for but also the size of the vertical bars associated with those arrows. In simple terms, am I to say we are aiming for these three outcomes shown below?
1. Very short arrows on the graft.
2. Very short vertical bars on the graft.
3. Very short overlay of red and blue lines (not arrows) where the numbers associated with them are zero or close to it.

absolutely - the goal is to get the arrows on the image as short as possible - these will be pretty much the same as the right hand most arrows in the graph area.