no problem - I was lucky with that one that I had the fix already done, so I get to look good

My first impression is that it works as it should and far better then ZWO backlash function. ZWO function does not remember last movement after shutting down the programm. Yours seem to do it but I will know it after a few times using it. I did a shut down the program and start it again.

My first impression is that it works as it should and far better then ZWO backlash function. ZWO function does not remember last movement after shutting down the programm. Yours seem to do it but I will know it after a few times using it. I did a shut down the program and start it again.

Thank You and regards Rainer

I have noticed SharpCap applies the backlash when using Course focusing but it does not apply it when using Fine focusing.

Have been able to use a few times and every time I see the same behaviour.

As far as I can see the backlash is applied even for the small move buttons. Note that the readout shown in SharpCap doesn't include the backlash adjustment – it's the readout as if you had a perfect focuser with no backlash. If you have a separate piece of UI that will show up for your focuser driver, you will see that its position readout will differ from SharpCap's when you are moving in the negative direction. You can check this out fairly easily using the Ascom focuser simulator.

In theory, SharpCap should also cope if you change the focus position using the drivers own UI or (for example) a hardware hand controller. SharpCap monitors the position of the focuser and tracks wherein the backlash cycle it is. I will admit that this particular aspect of the feature has had less testing

Don't know if it is normal, Seeing monitor appears both places.
Nothing important

Started playing with the Sequencer this weekend and it looks like it is off to a smashing start!

Have started to build some sequences, and have some requests for new functions based on my EAA workflow. Would like to have the sequencer be able to:

Set zoom level
Reset Display Histogram
Show a 'Target Name' input box, the text of which will fill in the Target Name field when you hit OK (particularly important right now since you can't rename targets once a stack has started)
Set Live Stack panel to auto hide

Also, within the sequence editor add a File > New menu item to create a new script when one is already loaded in the editor so you don't have to delete all the steps in the current script to start with a blank slate.

Thank you for your amazing work!

The one thing you can do so far is to reset the display histogram (using the 'Set <Control> to <Value>' step):

I will note down the other suggestions, certainly the File->New and prompt target name make a lot of sense.

Do you mean 'Set <Control Name> to <Property Value>'? If so, I am having trouble with it: 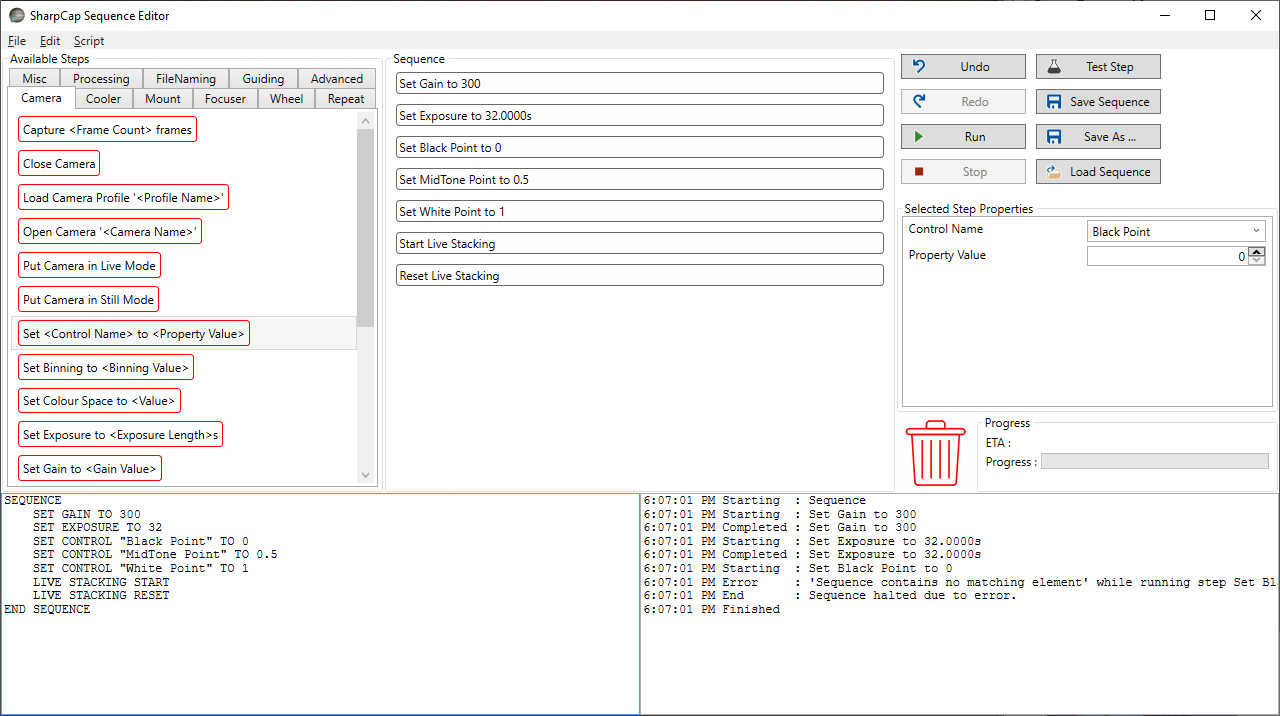 'Start Live Stack' seems to throw a garbage sub into the stack immediately that causes all further subs to be ignored because there are no background stars in the garbage sub. I add a 2 second wait and then a 'Reset Live Stack' to make it go away.

Also, is there a command to make the sequence progress window close after sequence completion?
Top
Post Reply
141 posts