A brief introduction to the SharpCap Sequencer

A brief introduction to the SharpCap Sequencer

The sequencer is perhaps the biggest new feature in SharpCap 4.0 and therefore deserves some introduction to help avoid people having to stumble around in the dark whilst working out how it works. It's probably best to start with a screenshot... 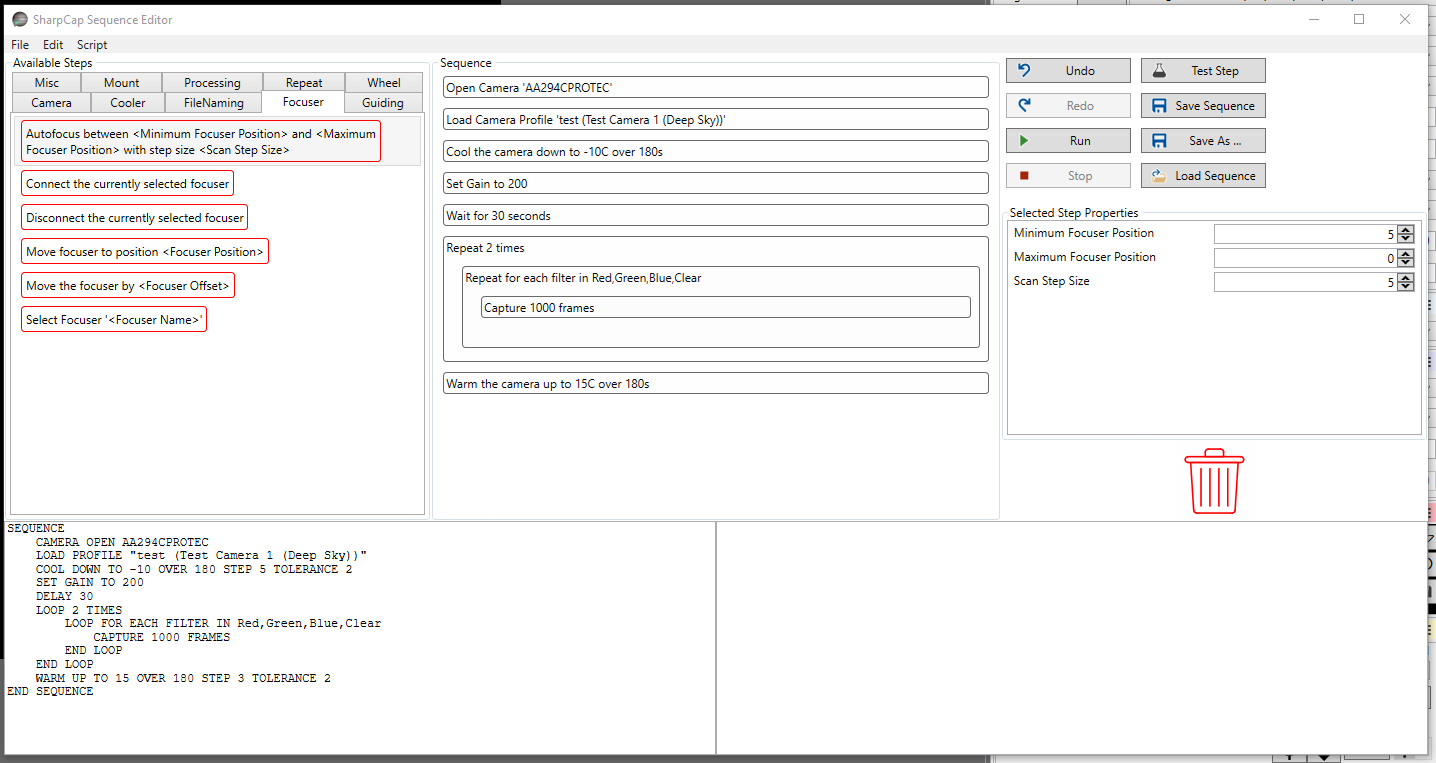 Anyone who is familiar with some of the tools that are used to teach kids programming (like Scratch, or the Lego robotics invention system) is properly going to recognise what is going on here – there are a whole range of blocks that can each make SharpCap to a specific task available on the left-hand side. You simply need to drag the blocks that you want into the middle area where your sequence builds up as you add new blocks to it. Some of the blocks are very simple such as opening or closing a camera while others are much more complicated such as performing an autofocus operation or plate solving and re-synchronising the mount position.

Each block may have a number of properties that are shown on the right-hand side. SharpCap tries to provide help for you when adjusting these properties for a block – for instance if the block that you are working with is one that moves the filter wheel to a particular filter, SharpCap will list the filters on your filter wheel if it is currently connected whilst you are editing the block. For this reason it's a good idea to have the camera that you are writing a sequence for open in SharpCap while you are designing the sequence.

Sequences can, of course, be saved to file and load it again later. Running a sequence is as simple as pressing the 'Run' button after you have created it or loaded it. I'm expecting to add additional ways to run sequences before SharpCap 3.3 is finished – for example perhaps menu items to run any of the last 10 most recently used sequences with a single click. Once the sequence is running, you can stop it at any point by pressing the 'Stop' button in the sequencer window or choosing the 'Cancel Sequencer Script' menu item. Note that the sequence may not stop instantly – the block that is already in progress may need to complete before the sequence can be stopped.

Another button to be aware of is the 'Test' button in the sequencer window. This run just single block that is currently highlighted in the sequence block list in the centre of the window. This is great for testing whether a block behave just the way you want without having to run the whole sequence.

There are a number of blocks in the 'Repeat' tab on the left-hand side that allow you to perform the same steps over and over again – these blocks are special in that they can contain a list of other blocks. So far you can repeat a fixed number of times or repeat for a list of filters or repeat until dawn/dusk/midnight. More types of repeat blocks may be added later.

If you have any experience in programming you may have noticed that there are no conditional blocks – that is there is no way to write a sequence that will perform some of its steps only if a particular condition is true. I haven't seen the need for these to exist just yet, but might consider adding them if we could work out a good justification for them existing. There are also no variables or functions, although there is a block that will run another saved sequence file which can be used to implement very simple functions if required.

To give you an idea of the sort of feedback I'm looking for in respect of the sequencer, some things I would like to hear about are :

Hard to Use : bits of the sequence designer that are harder to use than they should be – for example missing suggestions for block properties, things that are difficult to do that should be easier.

Ideas for other blocks : it can be quite easy to write new blocks, particularly simple ones, so if you feel that there is something missing let me know and I will investigate whether it can be added.

UI Improvements : could the layout of the sequence designer be improved to make it easier to use?

What is still to come?

I suspect that the sequence designer tool may be too complicated for many users – I have an idea for creating a simpler tool that we might end up calling the 'Sequence Wizard' that will build a sequence for you taking into account choices you have made (for instance capturing darks, flats, using different filters, etc)

I want to add better support for periodic events in the sequence – that is having a way to say that dithering should occur every six frames or every 10 minutes rather than having to put a specific dither step in every time you want the sequence to dither.

Anyway, hope that this introduction is helpful. Feel free to ask questions.

So far no remarks or suggestions ... but I a total noob when it comes to this kind of things

Made 2 simple sequences for cooling down (with a delay when it reaches 0 deg C) and warming up camera and works like a charm.

Oh, I do have a suggestion!

In the Sequencer drop down menu there now is Edit. It would be handy if there is something like Last Used or Saved and when a sequence is clicked in the drop down menu, it's executed. That way the whole Sequencer window does not have to be opened.

so you're absolutely right – there needs to be more in the sequencer menu. I have a plan to have a recently used list in there so that you can pick sequences that you have run recently, a browse button and probably a stop button to stop any sequence this is in progress.

The other thing – the fact that you can't do anything once the sequence is running – is deliberate. We know that aligning the telescope is not going to have any impact on the camera cooling down, but in general it's almost impossible to tell whether an action that the user can take will interfere with an action that is running under the sequencer, so all of the UI is meant to be locked out while the sequencer is running (except for the button that stops or pauses the sequence!)

Check!
And on the locked UI: logical decision. For me then of no use sadly: doing it manually while aligning and so on is just as fast, if not faster

understood – the extra menu items and a smaller progress window to show the progress of a sequence if you just run it from the menu are definitely going to be there before SharpCap 3.3 releases fully.

I finally got a chance to run a sequence this evening and it worked fine. The only issue I had was I could not set my dithering interval to 600s. It limits you to 100s. When I typed in 600s, it kept defaulting to 60s. That won't work for narrowband where I use 300s exposures and around 120s for RGB or a OSC camera. Did I do something wrong?

thanks for that report – I'd forgotten to set the correct range for that particular value, so it was defaulting to 0 to 100. An easy fix so I have done it already and it will be in the next version.

can I take it that your real goal here is the file organization? I will try to think of ways to deal with that as the pause/resume option seems a little bit of a clumsy way to achieve the goal.

In a way it is file organization, yes

But it comes from the fact that I'm playing with the Sequencer and thinking of a way for that dithering. There are different ways of setting that up without capturing frames while the dithering takes place but each time it ends up with new directories being created. And I use short(er) exposures, so after each 10 frames or so I would dither. If I have a set of 300 exposures, that means that I have 30 directories containing 1 set.