I have a ZWO 183MM camera and their lowest read noise ASCOM drivers use gain 270 and offset 10. I do EAA and use this setting but what do I put for brightness/offset 10 or 50 using the ZWO native driver since someone said that the offset is set for 5 x higher in SharpCap? Thank you!

The offset/brightness/black level value for a camera won't affect the read noise. All that control does is add a constant amount of brightness to every single pixel in the image. The best way to get a good value for this control is to set the camera up to take dark frames at your selected exposure and gain values. When you've done that, at the histogram and adjust the offset/brightness/black level control until the histogram peak is just separated from the left-hand side of the graph like this. 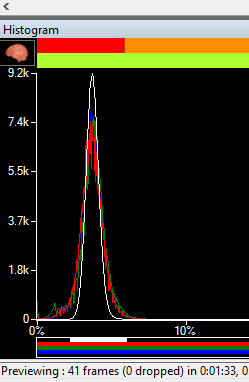 If you set the value too low then there will be a large number of pixels that have a zero readout value which may lead to dark subtraction problems (some of them should have had values below zero, but those were cut off at zero). Set the value to high and you are wasting dynamic range.

This is great advice.
https://www.astrobin.com/users/minoSpace/
Top

This was some excellent advice thank you. Prior to reading your very helpful suggestion, I took some bias frames using the shortest possible exposure at the gain & temperature that I would be using for EAA which was ASI 183MM at 170 & 270 gain and ASI 294MC at 125 & 300 gain. I used Maxim DL's Information window tool set to aperture for mode and read the average pixel ADU count for a target number between 100 to 1000 to prevent any pixels from reading zero causing clipping/data loss. This seemed to work great and the offset/brightness was 5 for my ASI 294MC and 10 for my ASI 183MM. Does this make sense to you and seem right Robin? Thanks again for your help.

What you have stated makes sense (to me).

I follow the process you have described to find brightness/black_level/offset (ZWO/Altair/QHY) to be used for imaging. The example is for an Altair 183C. My process is - for a given gain, set minimum exposure, use the lowest possible black_level (brightness) that gives a centralised histogram which does not touch either axis. My figures of 96 and 800 fit with the 100 - 1000 you have stated. I happen to use FITS Liberator for this process. This setting remains the same for the associated dark and flat frames. If the gain is changed, then I re-evaluate the black_level. 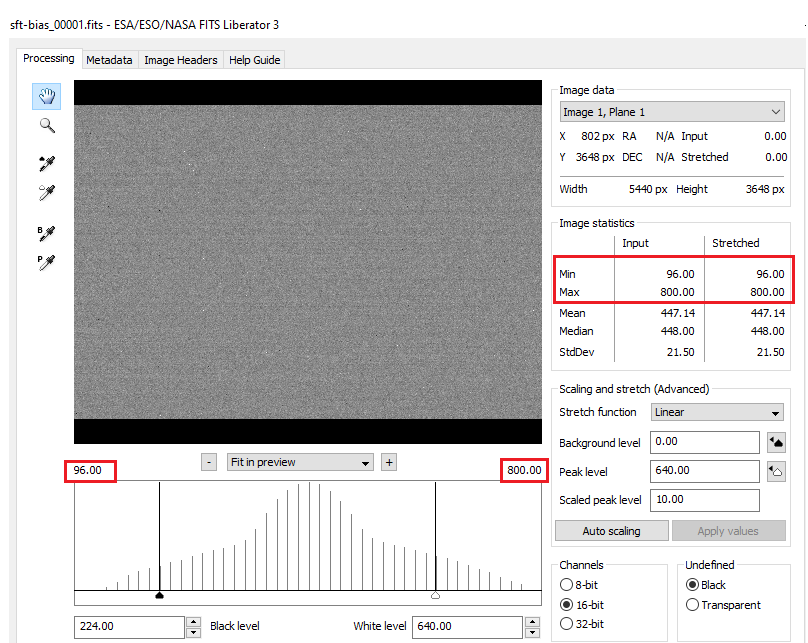 It is unfortunate that different camera manufacturers use different terminology for the same measurement.

The process I have described I use systematically and it seems to give consistent results https://www.astrobin.com/full/1graw1/0/

Interestingly, with my Atik 314E CCD camera, where the only setting is exposure (no gain or offset), the bias frame (captured at minimum exposure) follows the above. 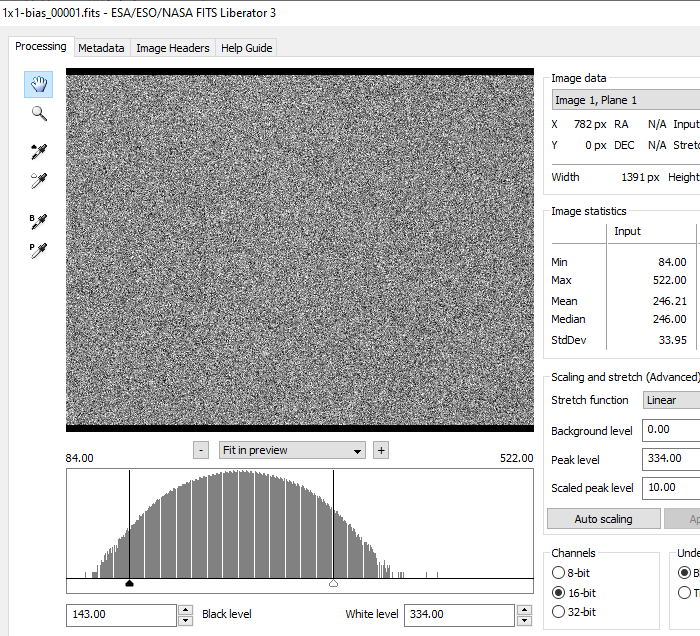 
I doubt this is a coincidence.

Yes, that sounds sensible to me. As long as you keep all the pixels (or at the very least all except a handful) clear of zero value in the dark frame case then you should be fine. Personally I'm not a great believer in bias frames – the theory is that they can be used to adjust dark frames to cope with different exposure lengths, but I always think that's a poor substitute for using dark frames of the correct exposure length. As far as I can work out if your dark frame exposures match your light frame exposures then bias frames have no impact on the final stacked image.

This is awesome! Thank you both Dave and Robin for the great feedback.