Hello, I am new to this forum but not to sharpcap. Greetings to everybody!

Recently I saw a video of Dr. Glover where he mentioned tools.sharpcap.co.uk calculator. In the javascript I found the formula to calculate the read noise of sky to embed in my excel sheet.
I have the possibility to reach by car a 21.77 SQM (at zenith of course) location. Lightpollutionmap.info declares a correspondance to Bortle 3 for that area (see attachments). tools.sharpcap gives me Bortle number 1.4.
What is the correct tools I should trust ? Why this discrepancy ?

Furthermore, for my camera ASI294MC, QE about 70%, px size 4.63 um, for that SQM I get an electron flux 0.28. Applying the well known formula 10*R^2/P (and using 1.75 e/s/px at unity gain 120 of my camera) I get a reasonable value of 110s for sub-exposure; my understanding (maybe incorrect) is that using a narrowband (like l-eXtreme) I should multiply by 25, which is about 2700s. But in astrobin I can find definitely acceptable pictures with subs not exceeding the typical 600s used for narrowband (with OSC). How can I interpret these numbers (theory vs. practice) ? 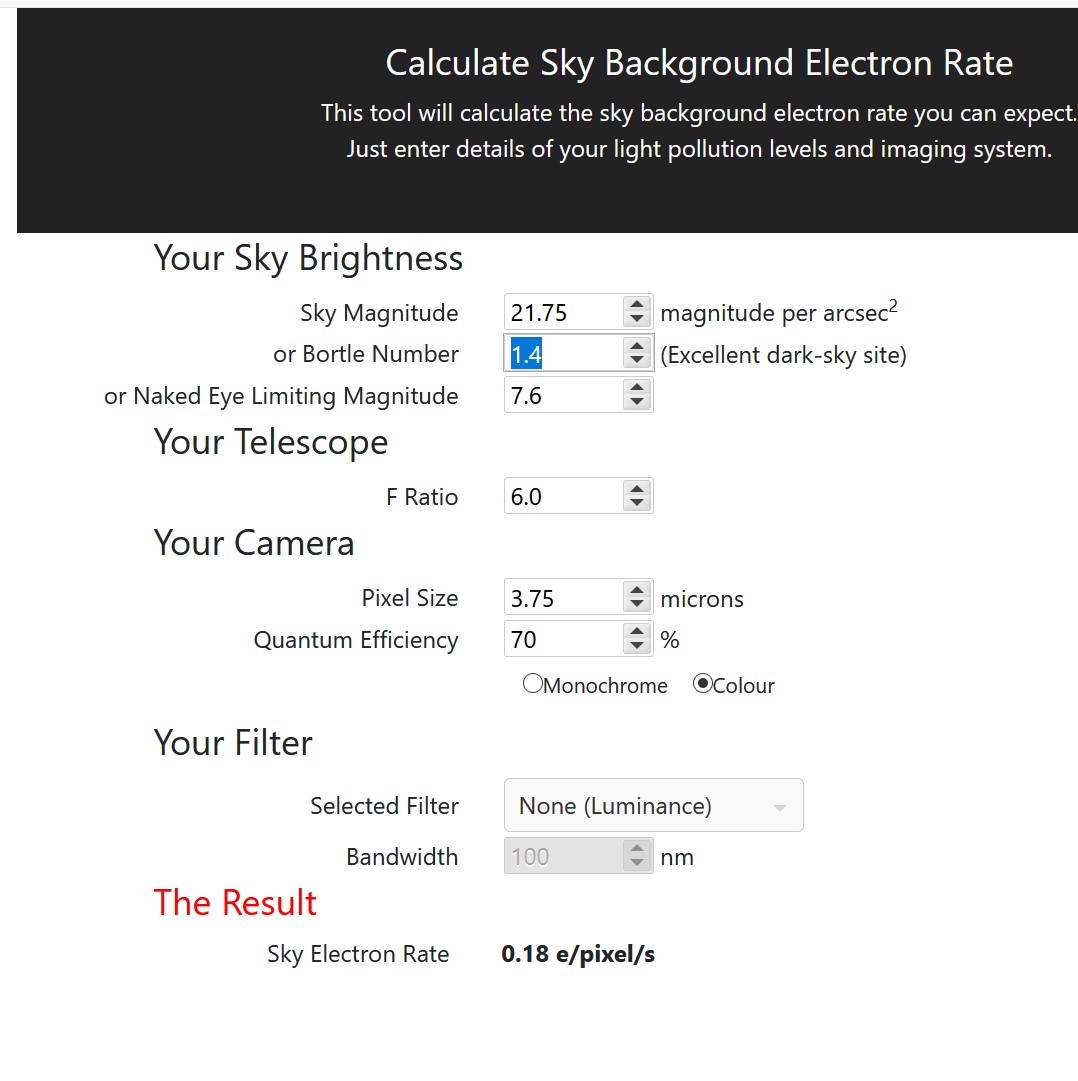 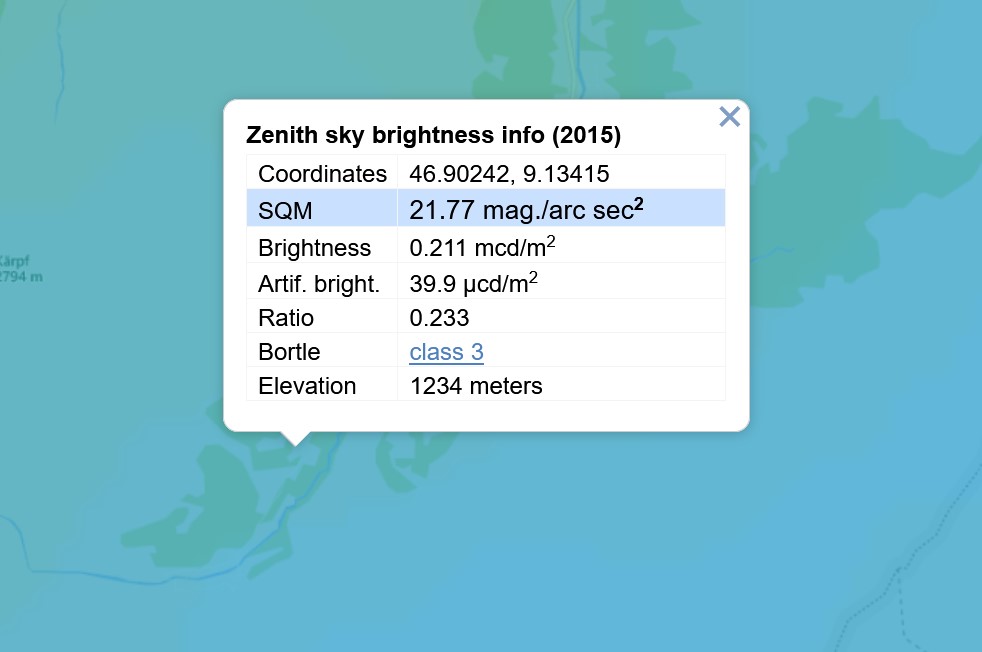 I can't help you with crunching the numbers, but I'd like to say this. While I agree that it is good to have a plan, I urge you to take a test exposure before committing to a lengthy run. The rule of thumb I use is the "1000 ADU rule". Simply put, it says that your sky background should come in at 1000 ADU above your bias level. This ensures a low-noise frame, and an even better stack. If you are willing to accept more noise per frame, then use 500 ADU above bias. But you should never allow the sky background to hover around the bias.

You can apply that rule to both narrowband and wideband imaging, although I have more experience with wideband. With a luminance filter with Bortle 5 skies, I can easily reach 1000 ADU with a 120s exposure. With Hydrogen Alpha, I can hit 500 ADU with 600s at bin 2. I've recently been experimenting with Ha at bin 1. The longest exposure I've taken so far is 240s, as seen here:
viewtopic.php?f=16&t=4036

It actually turned out better than I hoped for with such a short exposure at bin 1, although I wasn't happy that it was only 60 ADU above bias. Now after some tweaks to guiding, I can get up to 600s exposures, as seen here:
viewtopic.php?p=21475#p21475

Using a 600s exposure at bin 1 will give me a comfortably margin, but it is still far from the original 1000 ADU I mentioned. These are guidelines, and that 1000 ADU level applies to noisier CCDs. With CMOS you can lower it.

To summarize:
1. Never allow the sky to hover around your bias level. If you do, you will sacrifice faint nebulosity.
2. Choose an exposure that puts a "comfortable" distance between the sky and bias. I suggest 100 ADU for all camera types.
3. What is the upper limit? People will argue with me, but I believe that there is no upper limit. but I suggest 500 ADU for CMOS and 1000 ADU for CCD.

I have gone as high as 30,000 ADU above bias to capture the faint Integrated Flux Nebula (IFN) with only 1 hour integration time at Bortle 5, as seen here:
viewtopic.php?f=16&t=3962

EDIT: In no way am I suggesting replacing your preferred method of exposure determination. I'm just saying to keep the "1000 ADU rule" in mind, much like you rely on more than one source for weather forecasts.

Thanks a lot oopfan for your useful hints! I will take them into account

Please post your images when you return from the Bortle 3 site!

Regarding exposure, a reminder that one person's 600s exposure is not equivalent to another person's. It greatly depends on the properties of the telescope and camera. So, don't read too much into it.

But one thing is true: a well-exposed frame will yield more faint nebulosity. You will see more with greater clarity and less total integration time. The image I showed earlier of the Crescent Nebula is fine but there is much more nebulosity in the surrounding space around the main object. You can see hints of it: viewtopic.php?f=16&t=4036 . I used 240-second exposures at bin 1 for a total integration time of 100 minutes. It's OK but I can do better.

Now, take a look at the following image of the Tadpole Nebula. I used 600-second exposures at bin 2 for a total integration time of 180 minutes. That exposure is approximately equivalent to 2400 seconds at bin 1. Compare that to 240 seconds at bin 1 for the Crescent Nebula: 10 times more exposure per frame. You will have to take my word for it, but my image of the Tadpole Nebula is showing much more faint nebulosity than my Crescent Nebula. And it is all due to putting sufficient distance between the bias level and the sky background. The Tadpole Nebula had 500 ADU difference, and the Crescent Nebula had 60 ADU. 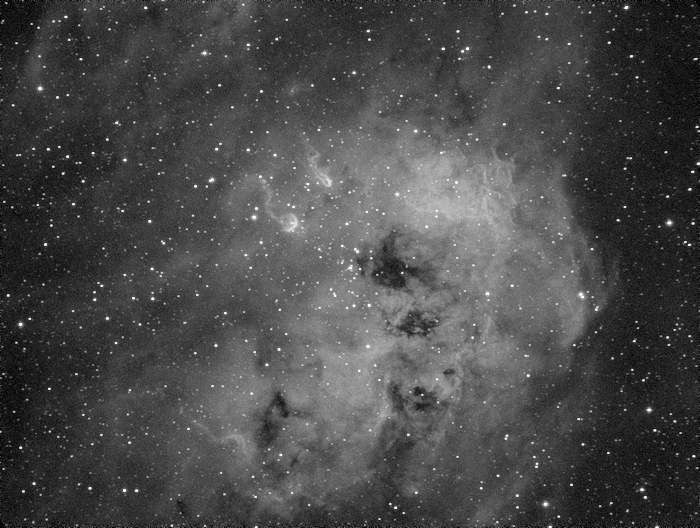 on the subject of the Bortle value, it looks like the Wikipedia article on the Bortle scale updated the SQM values for each level recently (Feb 2021). The code at tools.sharpcap.co.uk is based on the old values, which would have put 21.7 into the B1->B2 range. I will update when I get a chance.