tomorrows SharpCap 4.0 update will contain some new features along with the normal selection of bug fixes (actually there are less bugs being reported right now, meaning less bug fixes and some time for the new features!) I am trying to fill in some of the gaps in 4.0 - things that I would have liked to do before release, but had to postpone to get the release to happen at least slightly on time

The notable changes this time around are :

* The ability to setup dithering on a 'once every X frames' basis in the sequencer (as opposed the the current dither once every X seconds).
* The same change to live stacking - add the ability to dither based on stacked frame count rather than time
* Live stacking can be activated while the camera is kept in still mode - this has advantages as the capture of frames can be stopped completely while dithering or while live stacking is paused, rather than just reducing the exposure time
* A fix for the 'Save as seen' button (in the mini histogram) which did not work correctly in still mode.

< A fix for the 'Save as seen' button (in the mini histogram) which did not work correctly in still mode.

Something related to my post:
This is trivial and the meaning is the same, but the actual popup messages 'Save image exactly as shown' and 'Save as seen' in the mini-histogram 'Save' button don't match, please unify one of them.
I'm confused with'Save exactly as seen'in Live Stak> Save action.

And while you're at it, please reply to my post from the day before yesterday. 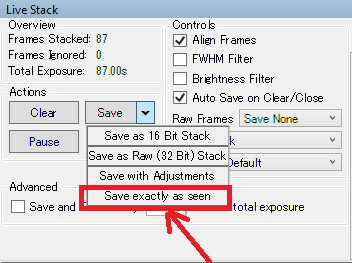 
Always from the user's perspective...

Thanks. Those features are keenly awaited.
Top

no, you shouldn't need to recalibrate unless something has gone badly wrong in the SDK update - the calibration values come from the electrical properties (timings, speeds, etc) of the circuits on the camera, the SDK version has little to do with them.