I must admit, it sounds very strange and I'm clutching at straws a bit here – I've not seen anything like this before.

Hi Robin,
It's the USB2 version.
I'm also baffled. And also tested NINA and AltairCapture which do the same, so it isn't a specific SharpCap problem - but I was hoping that the person who posted the initial message on this thread might have found a solution as they seemed to be describing the exact same problem.
It must be some deep USB/driver issue.

If you have access to another PC then try the camera with that. Proving (or not) the camera would be a good step. If it is a USB2 camera then use a USB2 port if possible.

I have tried many combinations of Laptop, cable, port, software (de-install / re-install / even fresh windows), I even bought a brand new Laptop.

So in desperation I dug out an ancient Laptop that only supports USB2.
And guess what - it works!
So this leaves me in a bizarre situation where I have a camera that will not work on 2 brand new i7, USB3, SSD Laptops (one Acer, one Dell) one of which I recently bought for many £s especially to do astrophotography - but will work on an ancient (painfully slow) USB2 only Laptop.

Also, I have an Altair HyperCAM 183C (a camera that puts a lot more strain on USB - but is USB3), a ZWO120MM and a ZWO120MC and all 3 of them work perfectly on the 2 new Laptops! And I mean absolutely perfectly, no stutters, no slowdowns, no dropped frames.

As I've said before this is not a SharpCap problem (I appreciate the time people are giving to try and help), and Altair have been pretty helpful in trying to sort this out but I find myself approaching the point where I will have to shelve the 290C and buy a different camera.
Top

the only thing I can think of that might help (and maybe you've already tried this) is to put a USB2 hub between your new laptop and the camera – normally I'd recommend not having any hubs or extension cables, but on one or two occasions I've seen them fix problems that are similar to this one.

Thanks Robin,
That is about the only thing I haven't tried!

I'll get hold of a cheap USB2 hub and give it a go.

Hi,
So a bit of an update. Using a USB2 hub didn't fix the problem.
However, it looks like the guys at Altair have identified the cause of the problem and I have a workaround (if not a perfect fix) and this info may help others if they have the same problem.

For me, it appears that this camera (or probably the camera + Laptop USB chip + driver + something else?) doesn't play well with the aggressive power management features in Intel CPUs. On Altair's advice I have disabled "C-States" in the Power Management options in the Dell Laptop BIOS. Since doing that the 290C has been capturing 3 second frames without a single glitch for several hours. The problem has gone. Just to check I switched C-States back on and within 10 frames it had hung again.
Note : When using short exposure times I didn't have a problem, it was only on anything > about 1 second - so it never felt like I was over-loading the USB port.

Not a perfect fix as these power management states help battery life and my main Laptop (an Acer) doesn't have any options to disable C-States in the BIOS - but definite progress non the less.

Bit puzzling why the 183C and the 2 ZWO cameras are completely unaffected. The 183C is a USB3 device (could that be something to do with it) but then the ZWOs are one each of USB2 and USB3.

For now, I'm going to carry on with the 183C and a borrowed ZWO guide camera so I'm back up and running. The 290C will be saved for planetary (short exposure / hi frame rate).

thanks for sharing the fix – you never know when somebody else might need the same information. I'm actually impressed the Altair managed to come up with that fix for you – it's not something that you could easily guess at so a considerable amount of work must have gone into sorting it out. 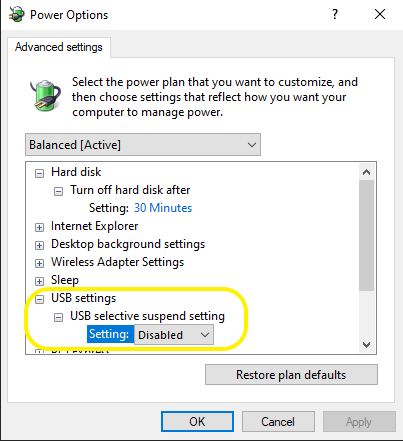 I was wondering if anyone else had experienced these frame dropping events with the GPCAM2 290C.
I am having the same issues as described above. I have a Lenovo E590 computer, which is up to date, running the current Altair camera drivers.
I have made another interesting observation, by setting the camera to minimum exposure time and 8 bits mode, one would expect the camera to operate at about 17.5 frames a second; this is the rate suggested by Altair Astro, and also matches what I get if I plug the camera into a 15 year old windows XP laptop (running Altair Capture, alas Sharpcap doesn't run on that computer due to it being Windows XP which is long unsupported).

However on the modern windows 10 laptop, with the USB speed set to 2, the frame rate is highly variable, sometime stalling completely and sometimes reaching almost 17.5. Most bizarrely, if I sit and waggle the USB mouse, the frame rate instantly goes up and remains high. I stop waggling the mouse and it drops back down again.

This GPCAM2 is proving very frustrating. I am having to leave the USB speed on 0 to get it even vaguely reliable, even then it regularly drops frames with long exposures. Sitting there waggling the mouse is not a solution!

The Altair Astro folk have tried to help, but disabling the C-states is not an option within the Lenovo BIOS and they were out of other options.
It's almost as if the computer has decided that the USB is not being used and so powering it down and the camera image is then missed at the end of the exposure. I get the same behaviour through a usb hub or directly into the computer.

It would be great to get the best out of this camera and Sharpcap, especially its livestacking which I like, but I keep losing data

Anyone got any ideas?