I am trying to find the 'sweet' spot for my gain imaging with my F/1.9 Hyperstar system using a ZWO ASI183MC Pro cooled camera. Everybody is telling me that I need to check the Unity gain. Is there some other setting besides the Sharpcap gain setting that I need to change somewhere?
Top

I also don't have the brain on the left hand side of the tool bars in Smart Histogram so I can test this Pro feature.
Top

I figured that I needed to run the sensor analysis first to get the 'brain' but it did not totally finish because I kept on on getting this message (screenshot).

I am not sure what happened but I now see the 'brain' on the left hand side. Not sure if this worked because the sensor analysis partially worked but now I am hung up so I don't trust that the analysis totally finished successfully. Is there a way to start over and delete what ever it stored somewhere?

When I try to restart the sensor analysis, I am am no longer to choose a an area and I see two red arrows on the upper right part of the screen. 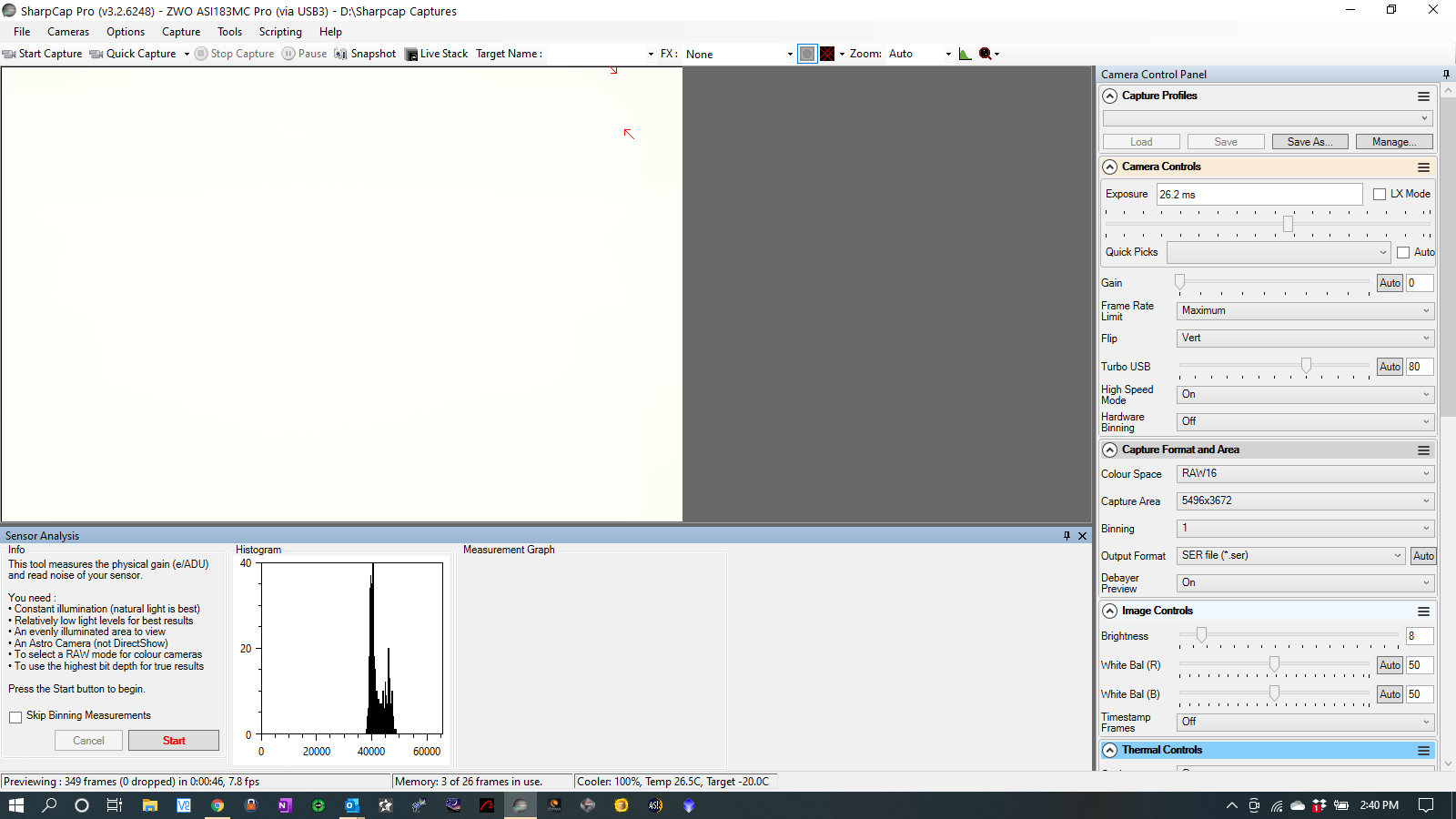 first can you please update to the latest SharpCap 3.2 from the downloads page - the version you are using is really quite old now and there have been lots of fixes to the sensor analysis.

I think that somehow the selection box has become really narrow - zoom in on that area of the image (zoom in a lot) and you should be able to see it and make it wider.

I did run the sensor analysis after I realized that the histogram needed the 'brain' on the left hand side on a fairly current version of Sharcap (maybe a few months old). I did not realize that after I started it, I should of used my light panel because I hard time getting it to finish because it kept complaining about my exposure and location on the screen (box). But it looks like it eventually finished just using the light source in my room but I am wondering how accurate it was?

So I tried to re-do the sensor analysis but it won't allow me to change the box location on the screen (red arrows in the upper right white area) on the screen shot. So I figured that maybe there must be some kind of setting stored some where so I un-installed the older version and I noticed there was a newer version available V3.2.66248.0 with a date of 01/2/2021. In regards to this re-install, should I be installing the 32 or 64 bit version?

But I am still stuck where it won't let me re-run the sensor analysis because it somehow remembers that I already ran it on this ZWO camera. I would like to re-do it using my light panel to make sure my numbers are accurate and using the newer version.

I did go out last night and used the histogram which did seem to run successfully and I got a recommended Unity Gain of 117, exposure length and gain for my camera. I have not processed my images yet to see how they turned out. 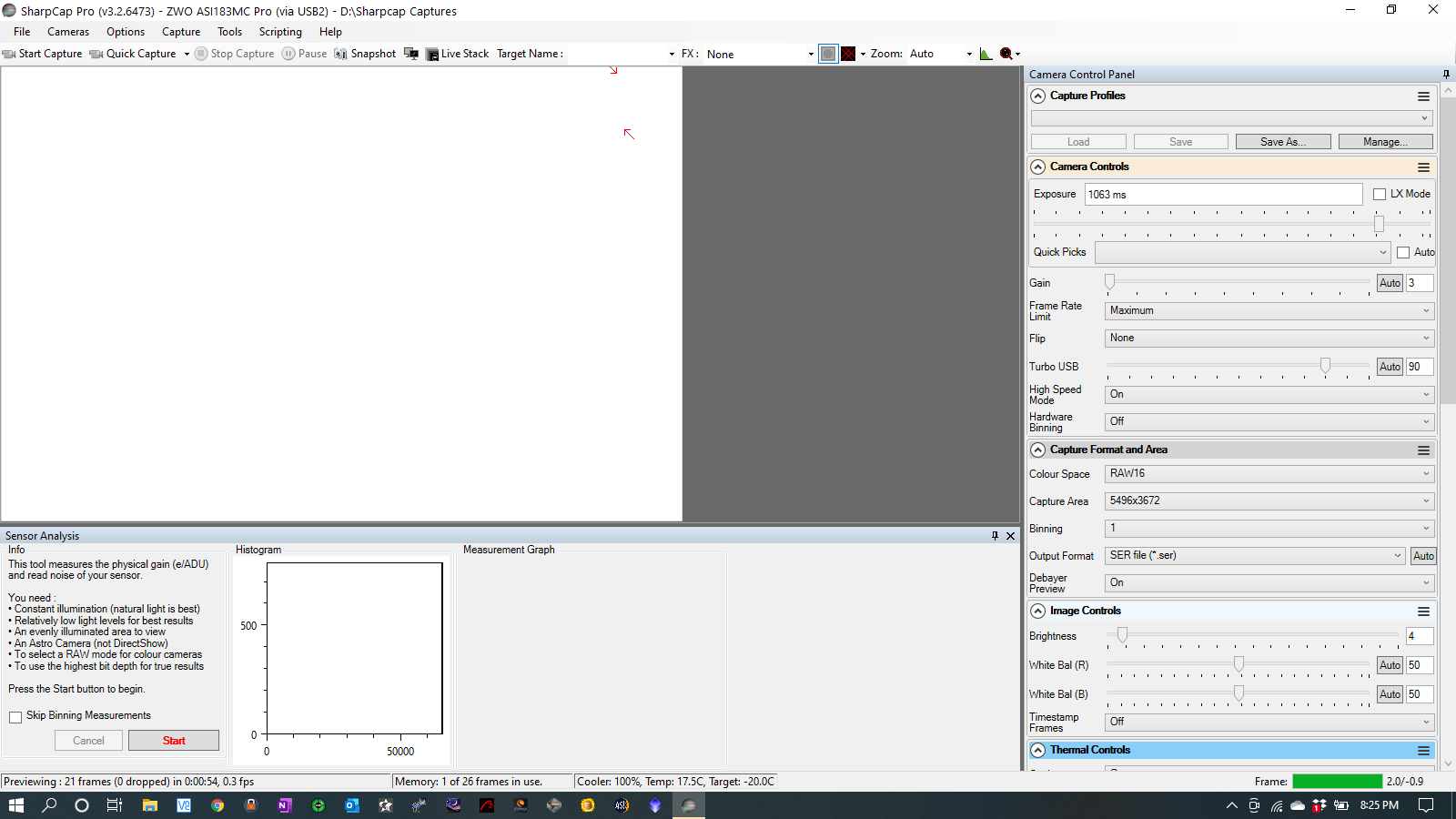 I attached a new screen shot with the current version (32b bit) created on 1/2/2021. You can see from my screen shot with the 'two red arrows' that it won't let me redefine the box for an evenly lighted space. I think it's doing this because it has already determined that from earlier sensor analysis which could be bad.
Top

it's just that the selection box is still stuck at about 4 pixels wide or something tiny.

I can get the same to happen myself if I set the selection box really narrow and zoom out. 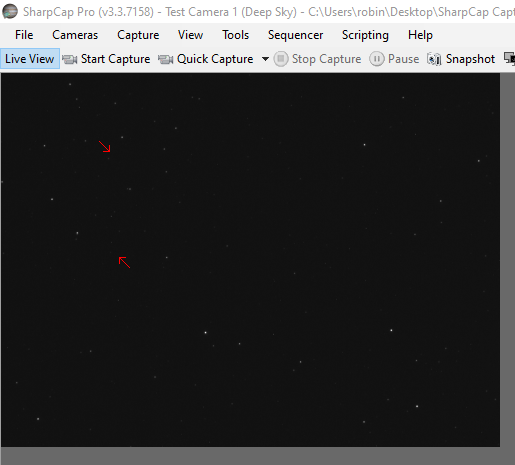 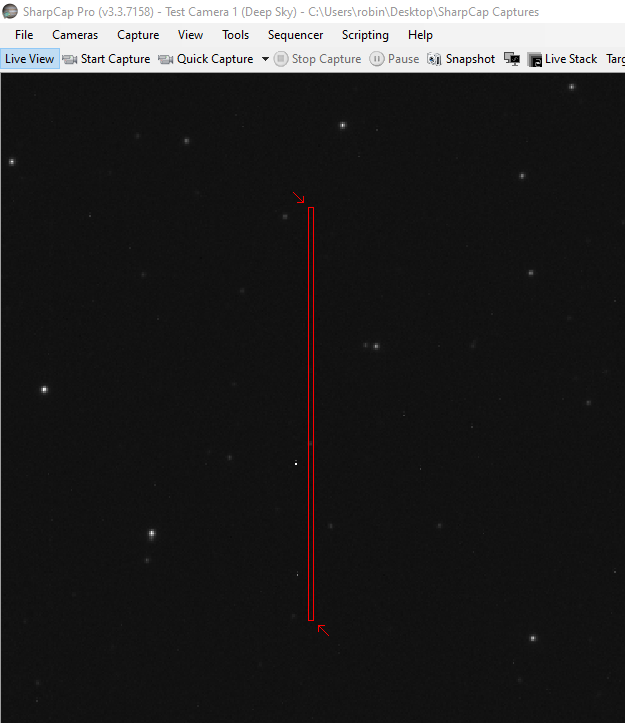 SharpCap will happily run the analysis again and again without caring whether you have run it already - this selection box size thing is your problem (you also need to reduce the illumination level somewhat too).

If you want, try the SharpCap 3.3 beta - that has a neat feature where if the selection box is active and you double click somewhere on the image, it will place the selection box around the spot that you double clicked, roughly taking up 1/2 the width/height of the visible part of the image. Very good for fixing this sort of situation without fiddling around in zooms.

I downloaded the Beta Version and it worked better.