First post on here.
I like the SharpCap software...very easy to understand. However, I did my first run with my ASI1600MC-cool (and first with SharpCap as well) last week and the final stacked image in Deep Sky Stacker was monochrome.

After checking on a few other forums and changing the DSS settings the final stack was still mono. I'm wondering if I have something set wrong in SharpCap. I did use the default settings with the Color set a Raw 16 for fits files. Is there something else I need to be looking at?

I did a search on this forum but didn't see anything along this line. If I missed it and this has been addressed then I apologize in advance.

there is a setting in DSS to tell it to debayer 16 bit FITS frames which you need to set (and tell it the right bayer pattern). You can also debayer in a program like PIPP and then stack the debayered images.

The DSS settings are shown in this post - https://www.cloudynights.com/topic/5788 ... y-stacker/.

Thanks. I tried the settings and still getting mono.
Here are my original capture settings for the test run if it helps. I thought I had used RAW 16 fits but looks like it was 8 instead.

I have just been through this with M27 viewtopic.php?f=16&t=297. I had some RAW8 captures, taken with an ASI120MC, which would not debayer in DSS. The RAW16 captures which produced the image in my post debayered fine.

I am looking into whether or not I have made a mistake (usually the case) or have come across some limitation in DSS. Interesting that you have the same.

Perhaps someone can throw some light on this? I just found this post https://www.cloudynights.com/topic/4468 ... -stacking/ - there might be something in this.

DSS will only debayer 16 bit mono frames for some reason that obviously made sense to its authors. If you have 8 bit RAW frames then you will need to debayer them in PIPP or similar before stacking.

I did try to debayer my RAW 8 in PIPP but without success.

Thanks for the help.
Top

Robin - thanks for the 8-bit RAW info in DSS.

I thought I had this sorted when I wrote viewtopic.php?f=35&t=254. Looking at it again, the images that were debayered in PIPP were RAW8 PNG files generated by an ASI224.

I wouldn't mind having a look at your FITS files and try to work out what is going on. If you want to, then PM me to sort out an upload somehow.

Is there any benefit of using PNG versus FITS files? I certainly don't have a problem using PNG files if there isn't much of a difference.
Top

Have a (thorough) read of http://docs.sharpcap.co.uk/2.9/#Camera%20Basics, that should help make an informed choice.

Which DSO is this?

There seems to be active debate in astro forums about which is the correct debayer patter for the ASI1600MC-Cool, with the ZWO owner suggesting GRBG (and he should know). Perhaps unwittingly, 'image flip' has played a part.

For the images in this discussion, colour space was RAW8, Output was FITS and Flip was None (see the settings file above). Because the images were captured as RAW8 the resultant 8-bit FITS files were unable to be debayered in Deep Sky Stacker (DSS will debayer 16-bit FITS). The result was a monochrome image with a check pattern overlay.

This is debayered as GRBG, stacked in Deep Sky Stacker with green adjustment applied, black point set and curve stretched in GIMP and cropped to show only the significant feature on the image. Not bad for a quick and dirty post-process but YMMV 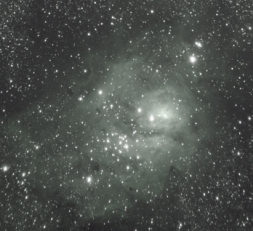 
A sample of 5 captures were debayered in PIPP and the resultant FITS files stacked in DSS, resulting in a coloured image with no check overlay. Minimal post processing was carried out in GIMP. No attempt was made to adjust colour. All 4 debayer patterns were used in PIPP. These are the outcomes (cropped to show the main feature of the image, as the output images are 70Mb and 4000x2000 pixels). 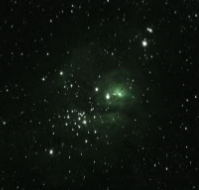 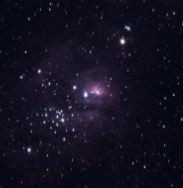 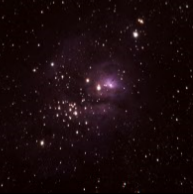 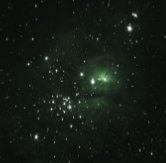 Below is a brief description of the process followed. If there is enough interest, I can work this up into a HOWTO document which would be more helpful to those starting out with all this (such as me!)

This is one of the original capture files opened in FITS Liberator. Note the 8-bit and the check pattern. Also the histogram is a 'good' shape for a DSO - offset from the LHS (no loss of data) and tailing off to the RHS (minimal over-exposed pixels). 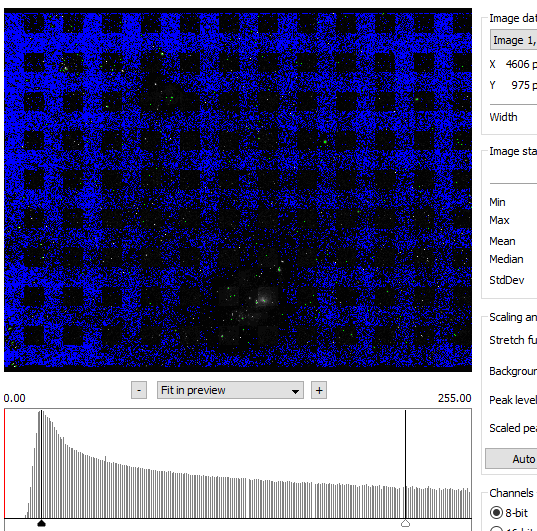 A PIPP processed file opened in FITS Liberator looks like this. Check pattern now gone, whether or not the colours are right is another issue. 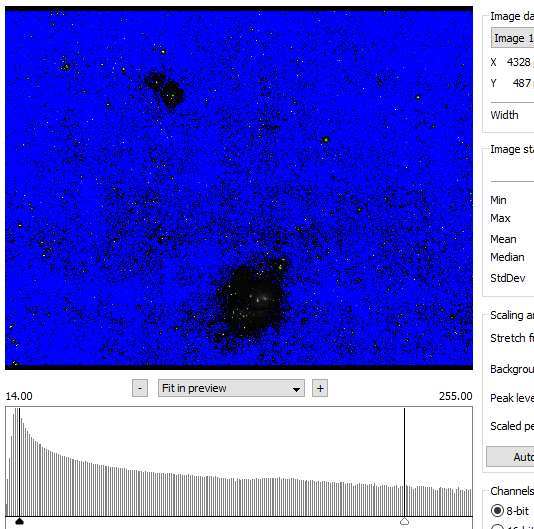 
The 5 PIPP output FITS files were loaded into Deep Sky Stacker and processed. These were the DSS settings used: 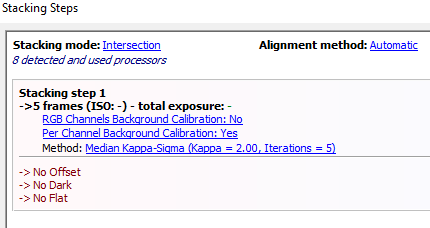 The DSS output looked like this. The Green is slightly out of alignment but can be adjusted by the slider. A file called Autosave.tif was created. 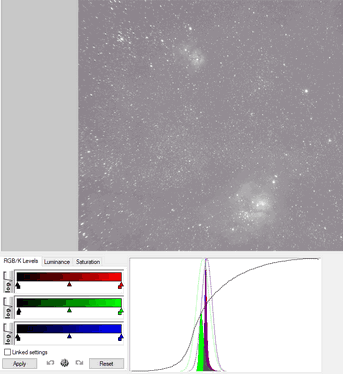 The autosave.tif file was loaded into GIMP. Using Colors > Curves, the black point was set and a stretch applied. The processed image was exported as a PNG. 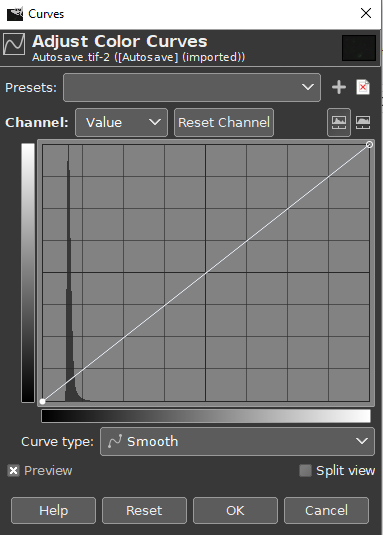 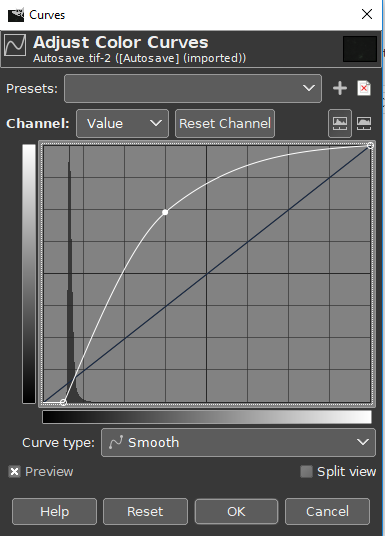 Due to file sizes, the output was cropped and colours reduced using FastStone Image Viewer.

The above process was repeated using debayer patterns of GBRG, BGGR, RGGB, GRBG, in order to see which is the best result.

The sizes of some files created during the above process: Software used: Deep Sky Stacker and the debayering of 16 bit FITS files. From the menu

select the checkbox and choose a debayer pattern from the dropdown 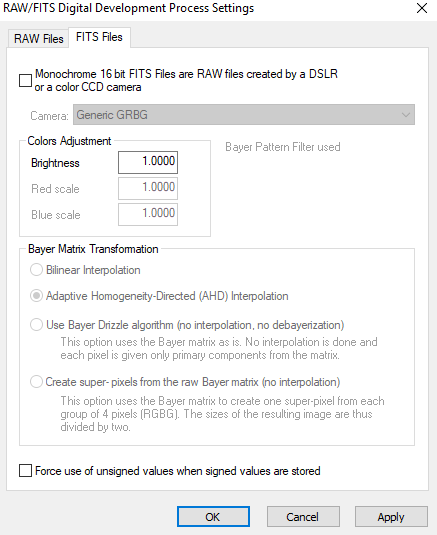 For completeness, the PIPP output was tested with FITS, PNG and TIF. All 3 output types were able to be stacked in DSS.
Top
Post Reply
10 posts • Page 1 of 1