To share some observations that may be of use to some and building somewhat on Oopfan's thread below. Nothing new I am sure and just common sense but I have been pleasantly surprised by how well a complementary OSC plus MONO camera strategy can work in quite a simple way to produce good images within relatively short total imaging times.

The most precious astro resources - certainly here in the UK - are clear moonless hours and the next just any night hours at all that are clear. So in imaging galaxies and emission nebulae etc. we obviously all try to assign imaging methods to objects in the most appropriate and efficient way.

It does require two cameras but a modus operandi that has worked well for me recently has been to reserve clear moonless opportunities for using an OSC camera and any other clear skies for narrow band MONO - in particular HA. Expensive on cameras but cheaper on filters and filter wheels perhaps?

For emission nebulae in particular combining an image from an an OSC camera plus UHC filter with a HA narrow band MONO camera image works well. Combining the HA into the luminance of the RGB seems to result in much improved detailing of the OSC image along with good colour (HA being much the strongest signal and usually defining the extent of most emission nebulae) compared with just adding some of it to the red channel. While not exactly narrow band - i.e.~ 25 nm in the O3 region and encompassing H beta as well - the UHC filter also appears to do a good enough job of selectively enhancing the O3 emission wavelengths as to make also adding a third O3 narrowband image into the mix superfluous - or at least to get any benefit might generally take an awful long time of O3 imaging to get a reasonable sized difference image.

So - my simple observation is that, given a reasonably fast set up (mine is F4.5 -5) only two hour or more imaging sessions, one, of RGB and the other of H alpha can be sufficient to combine into some really quite deep images (not to say that longer wouldn't be even better of course).

A brief comment on processing too since I ran into a lot of ways of doing that suboptimally.

For nebulae where the mono HA image often dominates (i.e greater than the G,B or R channels of the OSC image) what seemed to work best for me was to post-process the HA and OSC images separately at the linear stage and then- when both were stretched to non linear - combine the HA into the RGB image as a contributor to the luminance (using e.g. the PI max function). What didn't work so well was trying to add the HA just into the red channel. Adding HA into the luminance channel and then after also trying to add HA into the R channel along with some O3 into the blue and green channels post-stretching did alter the colours but with no real added useful differentiation of anything - and in other examples (not shown) added noise and blusih backgrounds difficult to remove.

For galaxies - where HA regions are just a very minor weak part of the total image contributing little to overall luminance it is of course then different. Then the UHC filter has no place and it is most appropriate to just to add part of the HA signal into the red channel at either the linear or non-linear stage.

A more Sharpcap/ weather specific observation is that it also seems - even under rather unpromising skies with clouds constantly passing over - a good idea to set up SC livestacking - using the shortest exposure that you can live with - and just leave it running with the FWHM and brightness filters set to save qualifying frames - a surprisingly large number of good ones can be accumulated between clouds (mine is running now as I type and has given me more than I expected tonight).

Below are a few example results by way of illustration. Some include O3 data - but which either didn't add much or only noise.

The main take-home for me was -processed as it was with the HA added to luminance image- C is a pretty clear deep image of the IC1805 cluster and nebula area given that it had only about 2h of imaging in total. So that process seems an efficient way of tackling emission nebulae - whereas galaxies (picture F versus E) benefits from a different approach.

IMAGE D 1C1805 at F4.5 (1.05 arcsec/pixel), Same as C but with an additional step of further combining some the HA and also the O3 into the R, B and G channels post stretching.

Maybe of use to someone who has both types of camera? 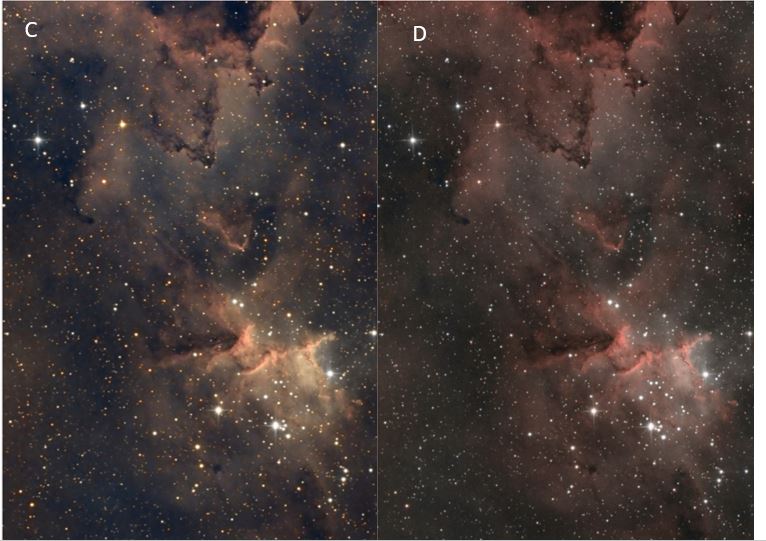 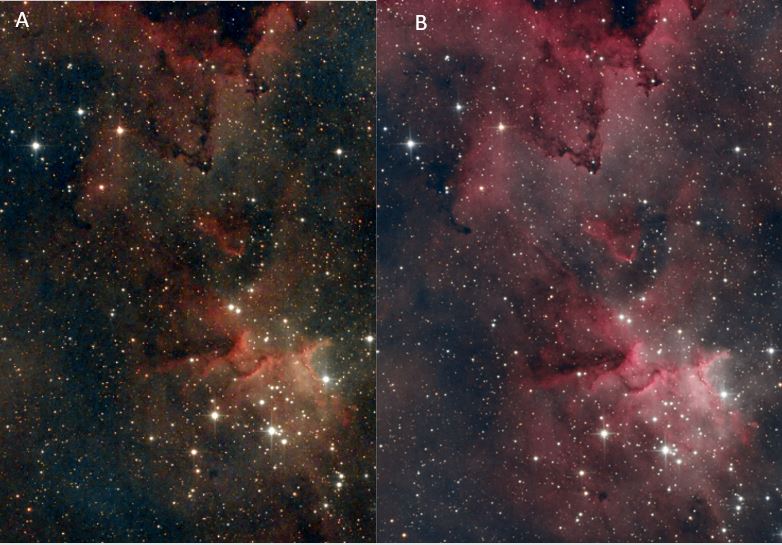