Got an idea for something that SharpCap should do? Share it here.
Forum rules
'+1' posts are welcome in this area of the forums to indicate your support for a particular feature suggestion. Suggestions that get the most +1's will be seriously considered for inclusion in future versions of SharpCap.
Post Reply
27 posts

I have just been prototyping how this might work - lots to do yet, but comments on the data displayed here welcome 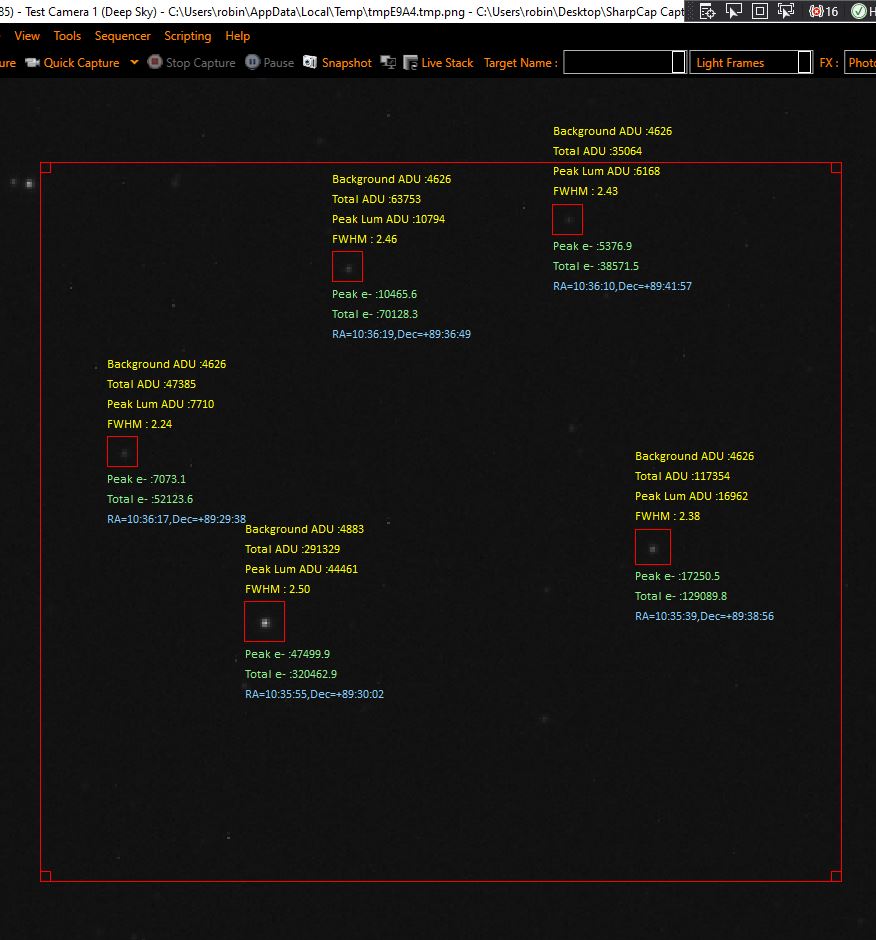 Background ADU are coming from the big rectangle?
Total ADU come from the small rectangles? (is theire size automatically set?)
Will it be possible to manually choose stars?
Could you also print out a "SNR"?
For me, 5 stars would be o.k.

If possible, could there be (circle) apertures like in aperture photometry used (star/signal aperture of about 1 ... 1.5 FWHM and a background annulus)?

I have picked the values shown so far straight from existing code designed primarily for star detection rather than photometry - that means that the methods of calculation may be a little 'sloppy' from a photometry point of view. If this is considered a quick reference tool (fully process the images later) then that may not matter, but I do want to get at least sensible values provided the calculations are relatively easy to implement.

Currently the values are sourced as follows :

Background - median pixel value of the rectangle drawn around each star - this rectangle starts off at a multiple of FWHM and is then expanded so that the star itself is only a small fraction, meaning the median should be largely unaffected by the presence of the star.

Peak - highest pixel value - note that for an RGB camera, this is based on the luminosity of a debayered version of the image, so does not correspond to a true pixel value. I suspect that the use of RGB cameras for photometry is probably very rare, so this should not matter

Total - Sum of all pixel values in the surrounding rectangle where the pixel value is higher than the background - note that a smoothing is applied to the luminosity before calculating this - the smoothing is linear so should not affect the value significantly as it will move brightness from one pixel to another rather than create or destroy it. There may be effects on the sum from the smoothing in pixels where the initial value is close to the background level. The smoothing is applied due to the star detection code giving more reliable star centroid positions if the noise is smoothed out before calculating the centroid.

At the moment, all stars that are detected are being highlighted (at least within the selection area). I do need to add some controls to adjust the star detection parameters as you can for other tools - that is still to do.

Thanks for the explanations. Looking forward for a first test. Regarding of SNR, I think it would first be enough to have the square root of the number of electrons.

from my point of view/ for my need a quick reference tool is sufficient. If I understood your description correctly, the SNR value could perhaps be expressed , for a quick reference, as a ratio of "Total - Background" to "Background", which would be useful even in the case of passing weak cloud cover.

As for more precise photometry, I attach a quote from the C-Munipack software documentation :

Aperture photometry determines brightness of a stellar object by integrating the signal in a small area on a frame. This area, usually called the aperture, is chosen in such a way that it includes all pixels that were exposed by the light from the measured object, but not the light from another source.

The point spread function that represents the spatial distribution of the signal from an ideal stellar object is rotationally symmetric, so the aperture has circular shape. The conditions described above define requirements of the ideal aperture size. If it were too small, a non-negligible part of the signal would be omitted; on the other hand, the bigger the aperture the bigger is the chance that another object appears in the area.

Supposing the frames were properly calibrated, the frame contains the superposition of two sources - the sky background and the signal from objects. When we sum the pixel values in an aperture, the sum contains these both of these. To get a signal from the object only, we need to subtract the background level.

It is not possible to measure the background at the positions of the objects directly. We need to estimated local background level from neighboring pixels. For this estimation we use another aperture that has an annular shape. Its center is aligned to the same point as the integrating aperture. The central blank part of the annulus masks the signal from the measured object. The mean value of pixels in the annulus is used to estimate background level at its center. In an ideal case, the annulus would contain only pixels that represent the background, without objects. In practice this is not generally the case, therefore a robust algorithm for estimation of the mean level must be applied - such an algorithm must effectively reject pixels exposed by stellar objects in the annulus. See the chapter Robust mean for its implementation in the C-Munipack software.


Many thanks for your job ! 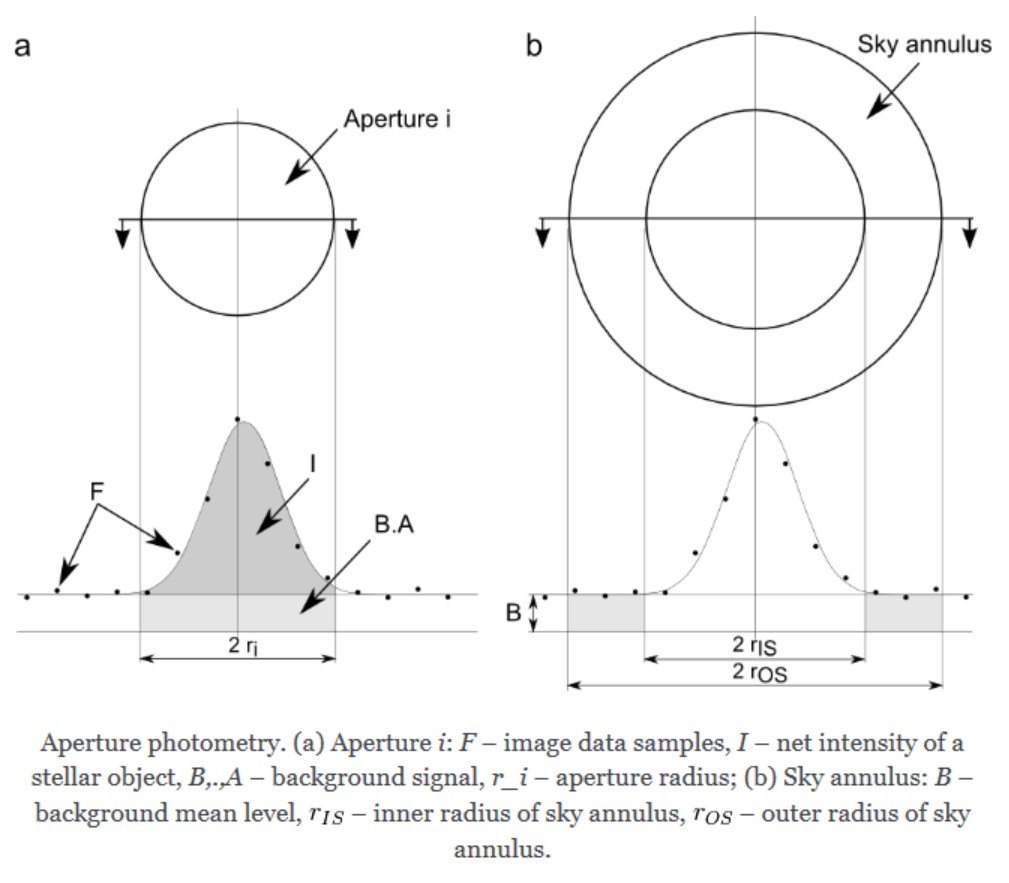 thank you both for the feedback - my measurment techniques are similar in concept (if not quite in detail) to the ones shown, so I am hopeful that results might be OK. That being said, I have just pulled the values from the existing star detection code and not being a photometrist (is that a word?) myself, I don't have the experience to compare them with other software easily... I have published the update with an 'experimental' tag on the feature - please feel free to have a play and provider feedback. I am particularly interested to know if the measurements are in rough agreement with other analysis of the same images.

Things I know that need to be done:

* A way to adjust the star detection sensitivity, parameters, etc
* A way to turn on/off the different pieces of information (ADU, electrons, star position)
* Something to explain why electron and star position values might not be available (sensor analysis and recent plate solve respectively)

But: I couldn't enable it. 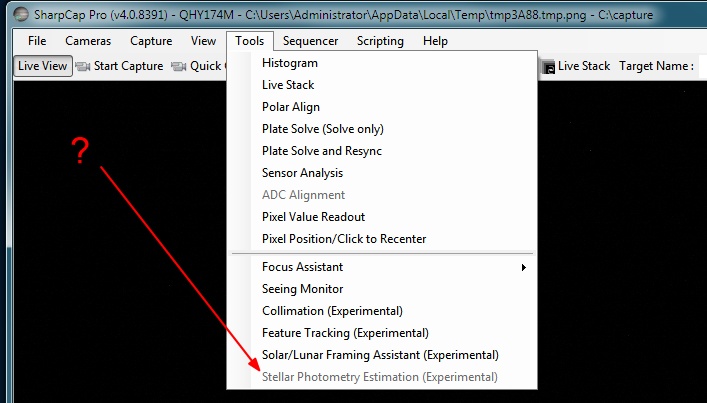 Sorry, my mistake - I left in some code which keeps it disabled except in my test setup - I will fix that and try to upload a new version.

The picture shows a real fits (QHY174GPS) in the Deep Sky Camera.

Unfortunately clouds here, also in the next days. A first test with the Deep Sky Cam looked good. I will do some further tests.

I think your points


* A way to adjust the star detection sensitivity, parameters, etc
* A way to turn on/off the different pieces of information (ADU, electrons, star position)
* Something to explain why electron and star position values might not be available (sensor analysis and recent plate solve respectively) 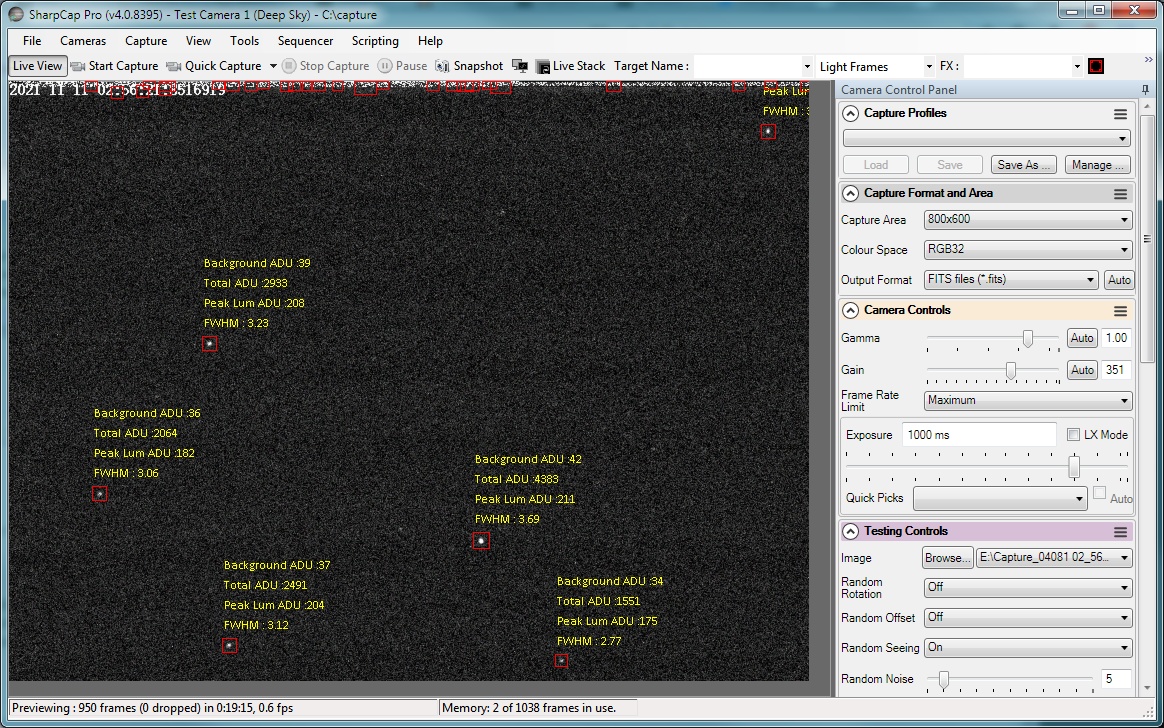