Let me first introduce you to two professional photographs. The first one is from an observatory atop Mt. Lemmon outside of Tucson. It was taken with a 24-inch telescope in color with a total integration time of 2 hours 10 minutes:

The background glow is the Milky Way. The dark spider-like feature are gases that are floating between you and the Milky Way. At about the 12 o'clock position is the star V1331. It sits in back of the dark nebula. The "solar wind" of this highly energetic star punched a hole through the dark nebula. The ring of light that you see is the starlight reflected off of the inside of the tunnel that it formed.

In the following photo the Hubble Space Telescope turned its eye on V1331 to get a closer look:

I've heard it explained this way: Imagine standing on railroad tracks at one end of a tunnel looking in. On the other end is a locomotive racing towards you. The locomotive's headlight shines brightly, so brightly in fact that it illuminates the interior of the tunnel. In the Hubble photo the star is the headlight and the ring is the tunnel's interior wall.

Attached is my photo in monochrome. It is probably best to compare it to the Mt. Lemmon photo. You can clearly see the dark nebula atop the glow of the Milky Way. At the 12 o'clock position you can see the star V1331 with its "halo". It's unfair to compare my photo to theirs. I pushed my $1000 worth of equipment to the maximum. They have multi-million dollar budgets.

EDIT of EDIT: Due to the lack of a temperature sensor my initial diagnosis was incorrect. The cause was not an overheated sensor but appears to be a "rogue" offset value (i.e. black level). I specified offset of 20 but it is behaving as if it is 320. Even more peculiar is that it happens on some nights but not others. I will update to the latest version of 3.1 and keep an eye on it. 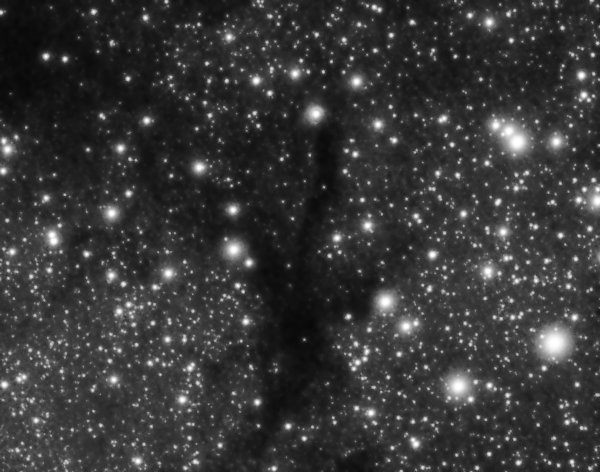 I understand that telescope-time is precious but it would be incredibly instructive to see how equipment and seeing conditions affect this object. If you could fit in some time for imaging V1331 I would greatly appreciate it.