Please share the equipment used and if possible camera settings to help others.
Post Reply
7 posts • Page 1 of 1

Methods all essentially just the same as in the previous post viewtopic.php?f=16&t=4243 except that this time the lucky imaging luminance component comprised about 1000 x 0.4s frames in each case. Probably 0.3s would have been a little sharper than 0.4s -- I did find 0.3s to provide slightly better resolution than 0.4s frames versus the ring nebula.

These planetary nebulae are indeed 'planet-sized' and have reasonable surface brightness - about 20 arcsec across - and so seemed natural targets for lucky imaging techniques.

Nice work, Tim. I wonder if you scanned AstroBin to find similar quality images of these nebulae using conventional AP exposures, what would their equipment consist of versus yours. There are other factors, of course.

Having now gone over to Astrobin to have a look I now feel quite shamed. Look what this Polish guy achieved with the same telescope as mine but equatorially mounted and also using lucky imaging. https://www.astrobin.com/379283/B/?nc=user. Puts my modest efforts firmly into context.

His strategy was also similar to mine using 0.5s frames but clearly rather more successfully! He doesn't mention how many frames he rejected or what the strategy was in detail.

For the most part though the Astrobin images are longer exposures to bring out the overall picture of the outer shell and HA regions so they can't really be compared with pictures of the core only. Ideally I would do both and then use multiscale processing and masking to place the lucky imaged centre into the wider picture.

The funny thing is of course is that the lucky imaging requires relatively very little in terms of sophisticated or expensive equipment. In my case an old Dobsonian with weights stickytaped on in various places to try and balance the camera and although I used a good camera in point of fact an uncooled camera with a small chip would have served equally as well.

I would have to say that it is at least as good as mine. So, in fact, with lucky imaging I have just about managed to simulate viewing conditions in the Netherlands

That's an impressive shot. He is at Bortle 4, so that's one thing. Another is, he's got a mono cam, and yours is OSC.
Brian
Top

Also using a MONO cam for luminance Brian so I don't have that as an excuse.

The real problem here is the seeing rather than the Bortle. Aircraft contrails etc (though less at the moment) - it becomes most obvious when it becomes almost impossible to focus with values jumping about so far that it becomes a matter of guesswork. Poor focus and poor seeing obviously compound. The worst seeing I have experienced was next to the sea where the Bortle was 4 but focusing nigh on impossible. The best place in the UK for seeing is in the East - probably Norfolk as far away from Western sea breezes as possible. But my wife takes a dim view of my proposal to move there

So in that regard more 'continental' locations such as the Netherlands - and even more so Poland - probably do have an advantage?

Not trying to "steel" your topic but for your info: I had a go at the NGC 6543 Core too a month orso ago with lucky imaging. Initially the unprocessed capture looked a bit like yours but with processing it really popped out. The image is 2x enlarged with processing.
The seeing was good and I used the Zwo ASI385MC planetary camera with the Optolong L-Pro filter on my 8" f/10 SCT. Bortle 7. That camera works very good for planetary nebulae.
5000 x 500 ms / Gain 330 / Offset 70 and stacked with PlanetarySystemStacker. This stacking software gives rather sharp results but no RGB alignment which has to be done with processing.
With stacking I tried different amounts of frames to see the effects on quality. With 100% use it became too blurry, 50% didn't change much. In the end I used 20% of the 5000 frames and that gave rather good results 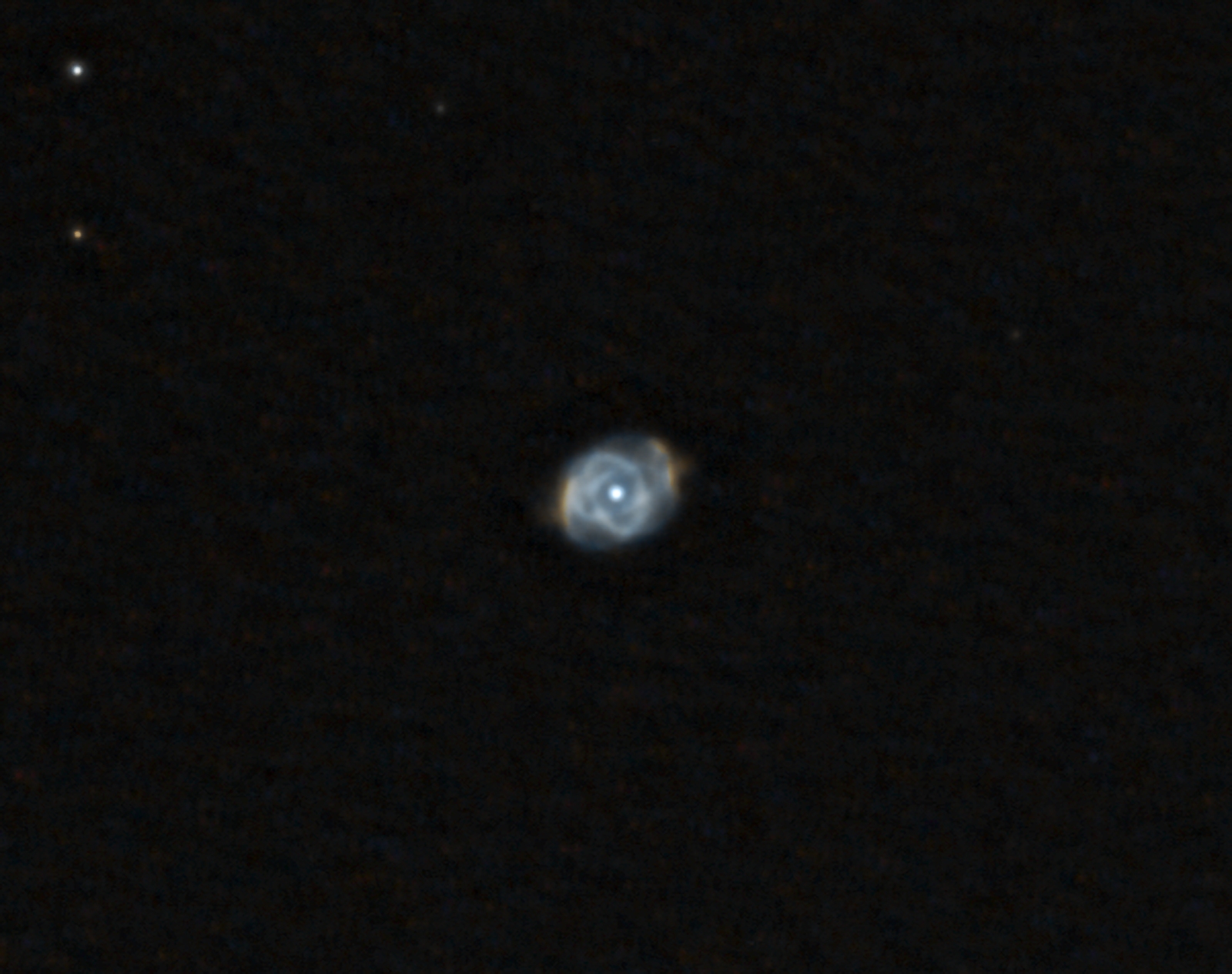 That is remarkably good actually - and especially at F10. A 'pass rate' of 20% for 'good frame' is also high. On my best night it was about 8% (although of course it depends exactly how you set the criteria) but on one night actually zero. The amount of shimmering in live view is usually a good indicator.

I also noted the catseye image you posted exactly a year ago year and that was really nicely detailed too - even without any lucky imaging. But frankly that picture from the guy in Poland was by far the best I have seen....phenomenal in fact and that with a scope very similar to mine.

As I commented to Brian the big difference has to be the seeing - it can't be a problem with poor focus or a poor instrument because in that case it would be impossible to get any sharp frames at all and I do get some that are very good but just not very frequently. So my conclusion is that even if I were to buy a top of the range C11 or something it wouldn't help. So for me the solution is more astro holidays to Norfolk --- the most Easterly Holland-like place in England which has both dark skies and steadier air.

But overall --despite the large data storage and work flow ... I am pretty happy now with using lucky imaging more on some of the brighter objects because it is delivering at least a two fold improvement in resolution.