Please share the equipment used and if possible camera settings to help others.
Post Reply
9 posts • Page 1 of 1

Actually, the topic name is misleading. I captured only HaRG, but I made it appear as if it was LHaRGB.

It needs one more session of Ha.
The exposures are short (for me) due to the existence of bright binary stars that I wanted to preserve.

Last night I was using KStars to plan my next adventure. KStars offers the ability to overlay a wide-field Digital Sky Survey (DSS) image. It makes hunting for objects easier than strictly going by NGC, IC, or Sh2 numbers. Plus it gives you the ability to frame a region of the sky exactly as you want it. The DSS overlay has a distinct color to it. Ha regions are a shade of orange. I rather like it. 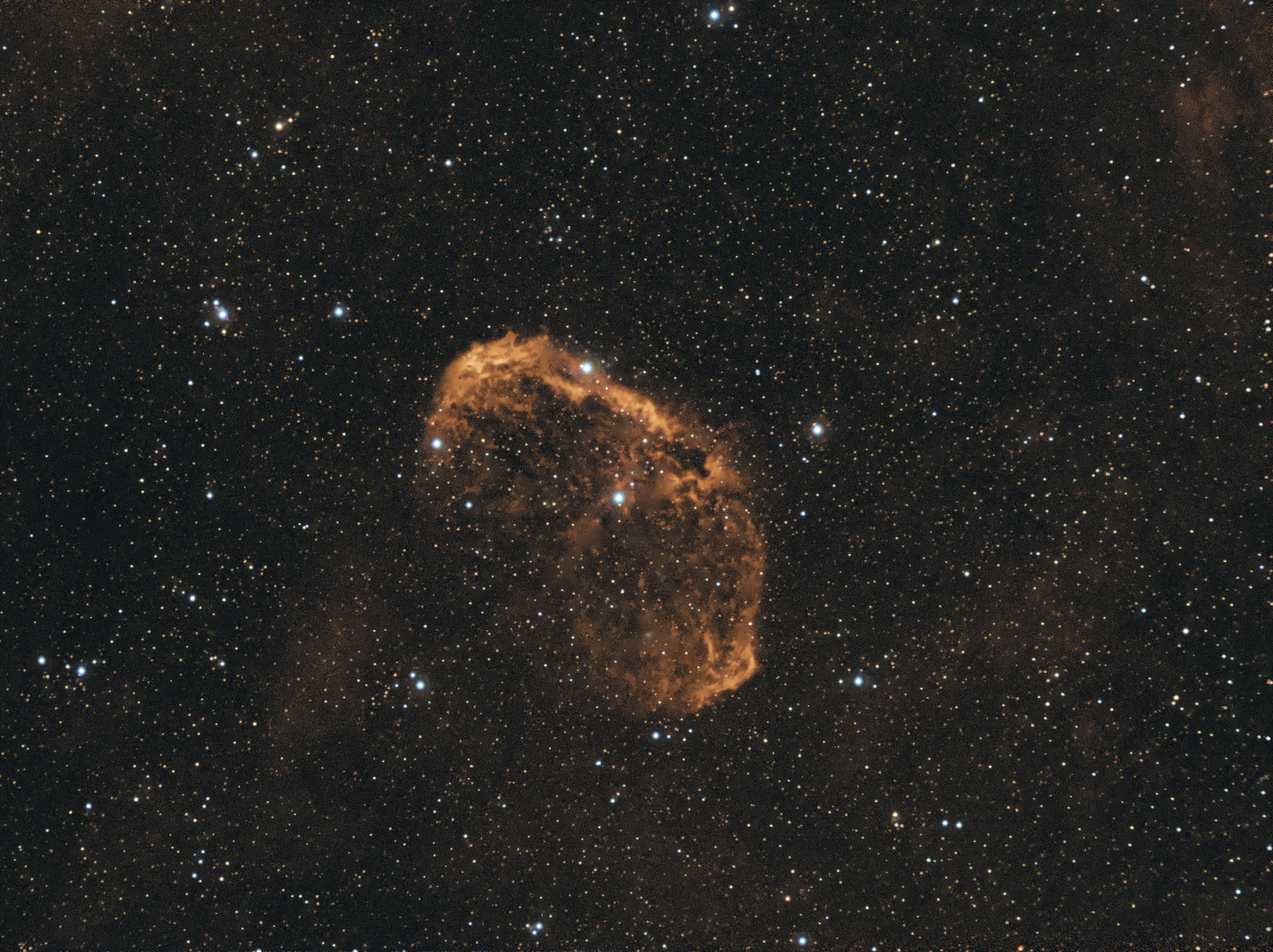 Here is what I am going for next. It is framed exactly as I want it. The color is in the DSS-style. I like the composition. It looks like a Michelangelo sculpture. 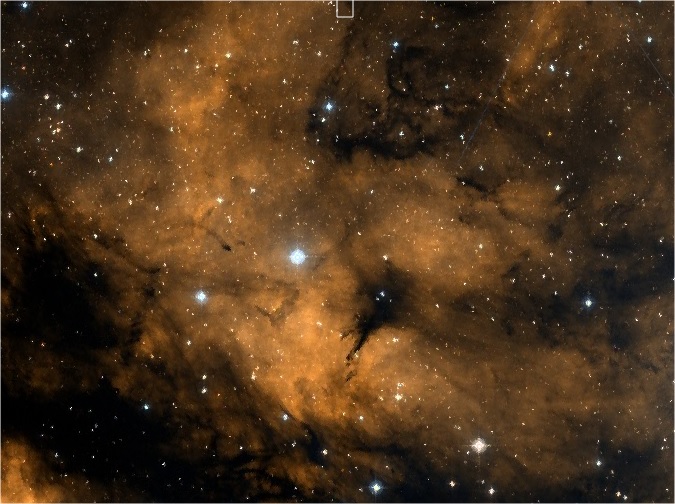 I figured that this is a good time for an update:

Here is the latest iteration. The biggest improvement, as I see it, is the "star layer". I chose a fewer number of stars so as to put the center of attention on the nebula. I originally captured 2.1 hours. That was according to a formula that I use for star clusters, where I want 16th magnitude stars to have SNR 100. I figure the more stars the better when the target is a star cluster. However, a nebula is different. I want to emphasize the nebula, not the stars. I ended up throwing away 80% of the star data. So I changed my formula to say that I want 14th magnitude stars to have SNR 100. That resulted in only 0.5 hours integration time. Using APP, I made that my new star layer, and this is the result. I like this a lot better: 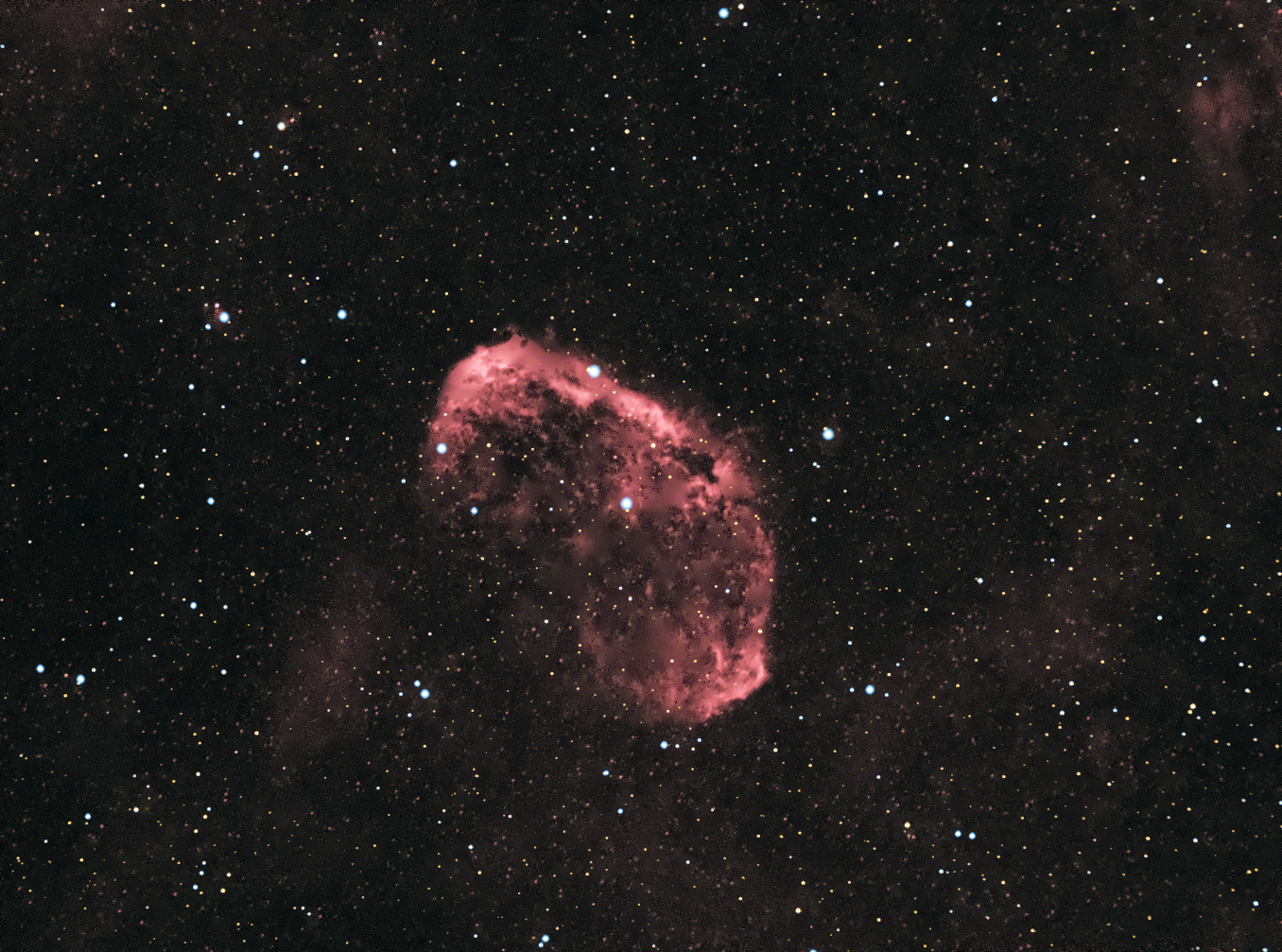 One more thing I want to mention is this. The title of this post contains the term "LHaRGB". That is totally false. LHaRGB is what you would use on a galaxy where you want to emphasize the HII regions in the galaxy's arms. In other words, Ha is just an enhancement. The image is still, primarily, an LRGB effort. This is NOT the case with my Crescent Nebula. Here, the star of the show is the Ha, and everything else is secondary. Technically, I don't know what you would call it. I'd have to research it.

To help us imagine what a true LHaRGB image of the Crescent Nebula looks like, take a look at the following shot that I took 3 years ago. It was taken with a standard Red filter. It is in black & white, but imagine it in color. Notice the abundance of stars. This is the heart of Cygnus. This is not what you want if the subject is the nebula: 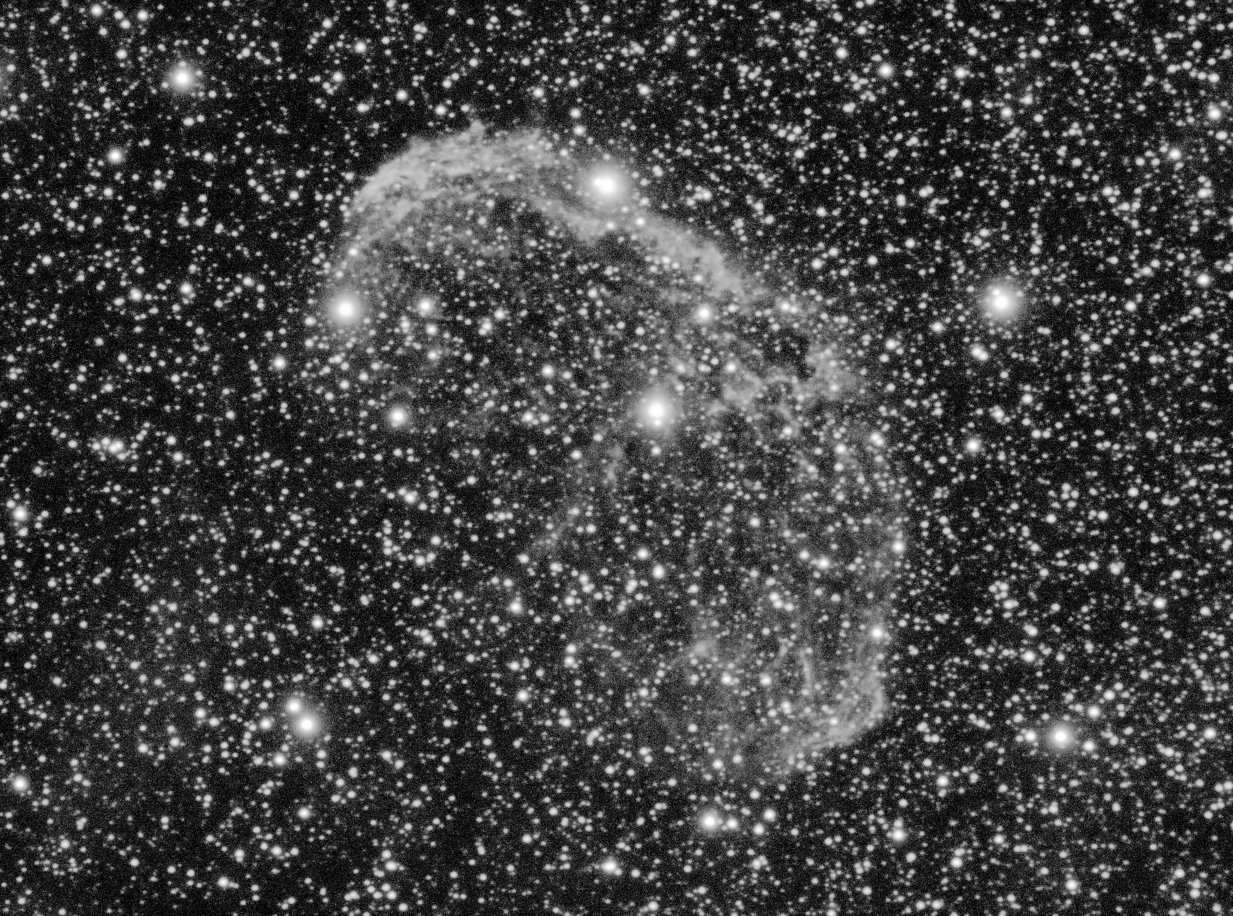 The last image with the stars minimized - but in a proportionate way (I think the term is 'binarized' ? so that the size diminishes proportionate with brightness) - looks really much better. Whatever it is that you did there worked. I've got lots of images of the same object but never got ruthless enough to really tone down the stars enough. The one advantage of the Newtonian though is that is that it does give the central Wolf Rayet star attractive-looking spikes.

Tim, I am very happy with it, although I need more integration time in Ha. Thanks for taking an interest in the processing. The best I can do is explain the steps:

APP's involvement ended with the creation of two stretched color composite images. One is the true color star layer from a half hour of RG data, mixed according to my recipe, and minimally stretched. The other is the false color layer from 1.7 hours of Ha data, injected into the red channel, and moderately stretched. Those two images were then fed into Affinity Photo for de-noising and a bit more targeted stretching, mostly the highlights.

I believe that the star layer benefited from two actions: (1) reducing 2.1 hours of RG data to only 0.5 hours, and (2) performing a very minimal stretch. Firstly, reducing the amount of RG data limited the number of stars to about 14th magnitude whereas the full 2.1 hours filled the frame with 16th magnitude stars. Secondly, and most importantly, I barely stretched it for two reasons: (1) four of the brightest stars have faint close companion stars that I wanted to resolve, and (2) I knew that I wanted to stretch the merged image in Affinity Photo some more. That was the driving motivation for holding back on the amount of stretch in APP.

I like APP a lot, but I don't have as much flexibility with curves manipulation compared to Affinity Photo. I knew that I wanted to boost the nebula's highlights, but that kind of targeted stretching is not possible in APP. Now that I think about it, I should have stretched the nebula in Affinity Photo BEFORE mixing in the star layer. I'll try that next time.

Thanks Brian. Yes that makes perfect sense - you can adjust the HA contribution versus the 'rest' - and reducing the proportion of the latter works well. Are you thinking of adding OIII as well?

After having slept on it, I've come to believe that stars and DSO's occupy two widely different domains. Stars are high dynamic range objects where the difference between 7th magnitude and 14th magnitude is around 600:1. Compare that to most DSO's. Stars do not tolerate a lot of stretching without appearing flat and uninteresting. On the other hand, DSO's require quite a lot of stretching. So these are two incompatible objects.

I guess I've been naive believing that people overlook "cooked" stars when the center of attention is a DSO. The Crescent nebula proved me wrong. All things make for good composition. If it wasn't for APP's new star removal tool, I would have remained in the old mindset. However, I didn't employ star removal to achieve that purpose. I used it to isolate the nebula from the stars so that I could inject just the nebula into the red channel. That decision presented the opportunity to separately image the star field properly.

I am still new to star removal, therefore I am not comfortable recommending its use in all cases. The tool does mangle your data which is pretty obvious in the Crescent Nebula, but not so much with Sh2-86. The jury is still out until I can increase integration time in Ha. I am hoping that data mangling is inversely proportional to the SNR of the DSO. Therefore, more integration time equals less mangling (hopefully).

Something else to investigate are star masks. In normal LRGB or OSC astrophotography of a galaxy, it would be helpful if I could apply a star mask while stretching the galaxy. However, that means that I need to select a short exposure to preserve the integrity of stars. The unfortunate consequence is that the total integration balloons due to the low surface brightness of the galaxy. The solution to that problem is to buy a camera with a deep full well depth, on the order of 50k-100k. My camera is only 14k.

Tim. Yes, OIII is on the docket. Dave and I are planning a joint project. I've got 4 hours of astro-dark this time of year, but Dave has none until later in July. I'll bulk up on NB until the Crescent becomes meridian-challenged. By then, Dave should have regained astro-dark, so he can pick up where I left off. I don't have access to the sky, west of the meridian.