Last night was cold and humid, but I got the results I expected for M27 with only 2 hours integration time. 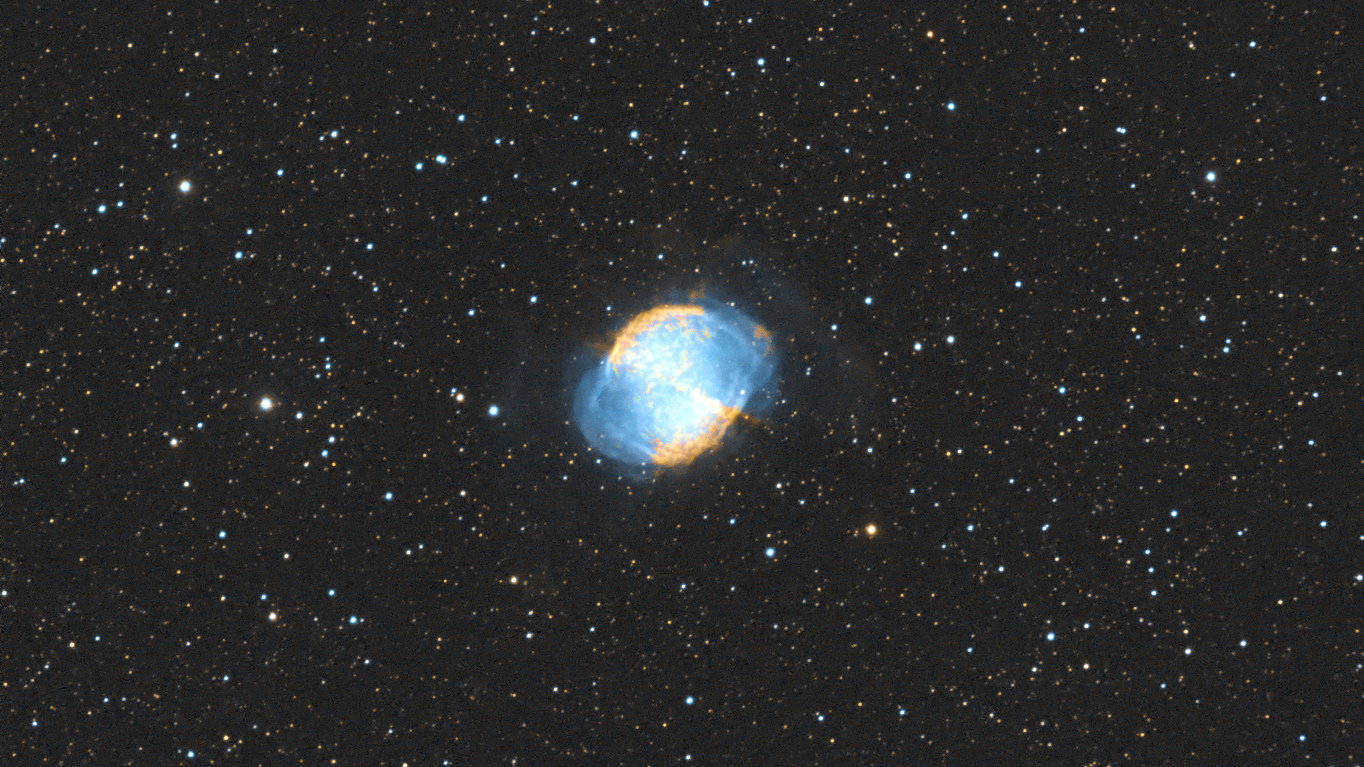 A couple nights earlier, I captured "scouting" images in Ha, OIII, and SII:

You can see the low quality, but that was by design. I was interested in capturing the most nebulosity instead of creating a museum-quality image. I captured one frame in each filter at bin 2 with 600s exposure. It quite clearly shows that SII is very weak compared to Ha and OIII. I took that into consideration when I decided to only capture Ha and OIII last night.

In preparation for last night's effort, I analyzed the scouting images using Photometry and AstroImageJ. I measured the density of the nebula, and then used it to calculate the Photon Flux Density (PFD) of each filter (units of photons per square-centimeter per second.) Think of PFD as a fundamental constant of M27. It is a measure of the number of Ha photons hitting the Earth's upper atmosphere. Part of the magic is removing the dependencies on the telescope and camera used to measure it. Now that I have the fundamental PFD values for M27, I can run them through another calculator that can provide guidance on exposure and integration times for ANY telescope. At least that is the theory!

In the scouting images, you can see that OIII is much stronger than Ha. There are a couple reasons for that. Planetary nebulae are very strong in OIII, plus my camera's sensor is much more sensitive to green wavelengths (OIII) than red (Ha). Those combined give the impression that M27 is saturated in OIII. The strength of OIII is a fundamental property of M27, but the difference in Quantum Efficiency (QE) was factored out when calculating PFD.

There is something I did that gives last night's image a "balanced" appearance. I used my calculator to adjust each filter's integration time so that the Signal-to-Noise Ratio (SNR) of the two stacks are equal. Here they are:

Notice how I captured half the number of OIII frames. I did that for two reasons:
1. OIII is much stronger than Ha.
2. My sensor is more sensitive to green than red.

Finally, as you can see I'm just starting to pick up the outer shell of M27. The only cure is more integration time. Doubling the exposure would help reduce the total time, but my auto-guiding is not up to it.

Thanks everyone for your up-votes. I'd like to use this opportunity to repeat something I've said in other posts, but it bears repeating:


The purpose of calculating the signal-to-noise ratio (SNR) is to optimize my time at the telescope. If I did the "normal" thing and captured the same number of Ha and OIII frames, then my final image would be dominated by OIII (for reasons I described in my post above.) To correct that imbalance, I would have to use APP's (or PixInsight's) tools to *boost* the Ha stack, but that also boosts the noise since there is no such thing as a free lunch. Conversely, I could decrease the strength of the OIII stack, but that is crazy -- it is the same thing as throwing away OIII frames. So my approach to astrophotography is to calculate how much of something I need in order to achieve a goal. In this case, I wanted to balance the Ha and OIII stacks. That is how I decided to capture 16 Ha frames and 8 OIII frames. By doing so, I used every minute of telescope-time to its fullest advantage. I would even go as far as to say that it is the reason why I was able to capture the outer shell in only 2 hours.

Thanks, Dave. That was a wise investment you made. It benefits us all.

I like "HOO2". That's what I am using, but I also like "LRGBHOO". I've decided to capture another 7 hours of Ha and OIII in an effort to further reveal the outer shell. After that, I'll work on capturing the "LRGB" part. I just have to careful not to allow myself to be consumed by M27 at the expense of other objects this summer.

Last night I captured more OIII frames with the goal of doubling the total SNR. I've got a couple more sessions to go before reaching total integration time of 9 hours. Hopefully by then the outer shell will reveal itself clearly.

According to my analysis, I need to capture twice as many Ha frames as OIII in order to achieve SNR balance of the two stacks. At this moment after two sessions, I have the opposite: twice as many OIII frames as Ha.

The following attachments show the negative impact of having the wrong ratio of Ha to OIII. In one of the attachments you can see that I used APP's color combine tool to boost the strength of the Ha stack. However, it had the unwelcome effect of diminishing the strength of the OIII stack! Perhaps the same would happen using PixInsight? At this time, I can only recommend that if you find yourself boosting stacks to achieve better color balance, then you really should consider doing it naturally by capturing more frames in the weak channel(s). 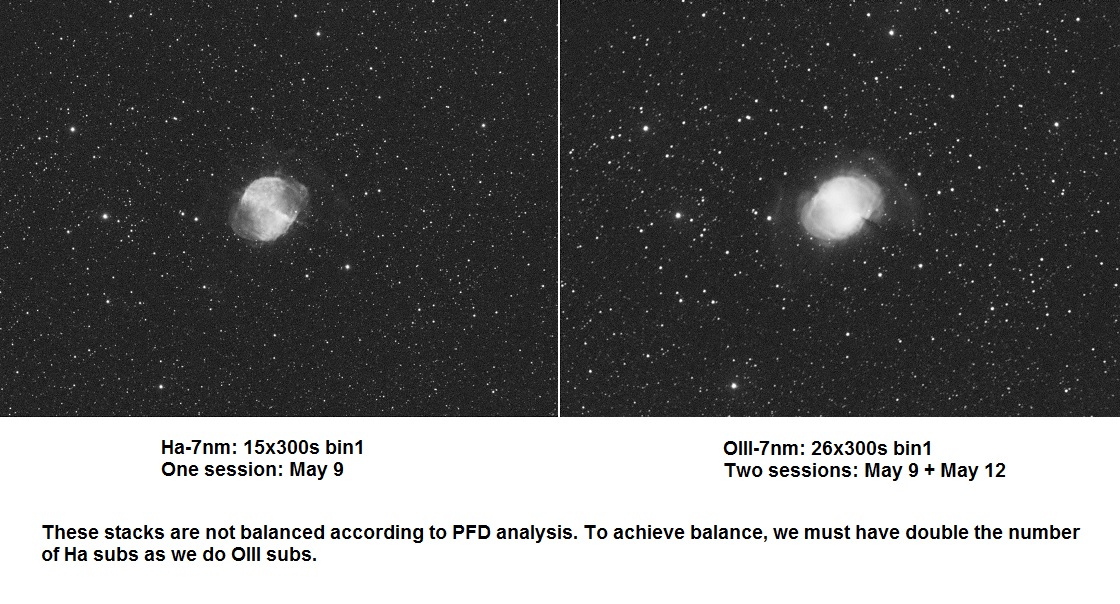 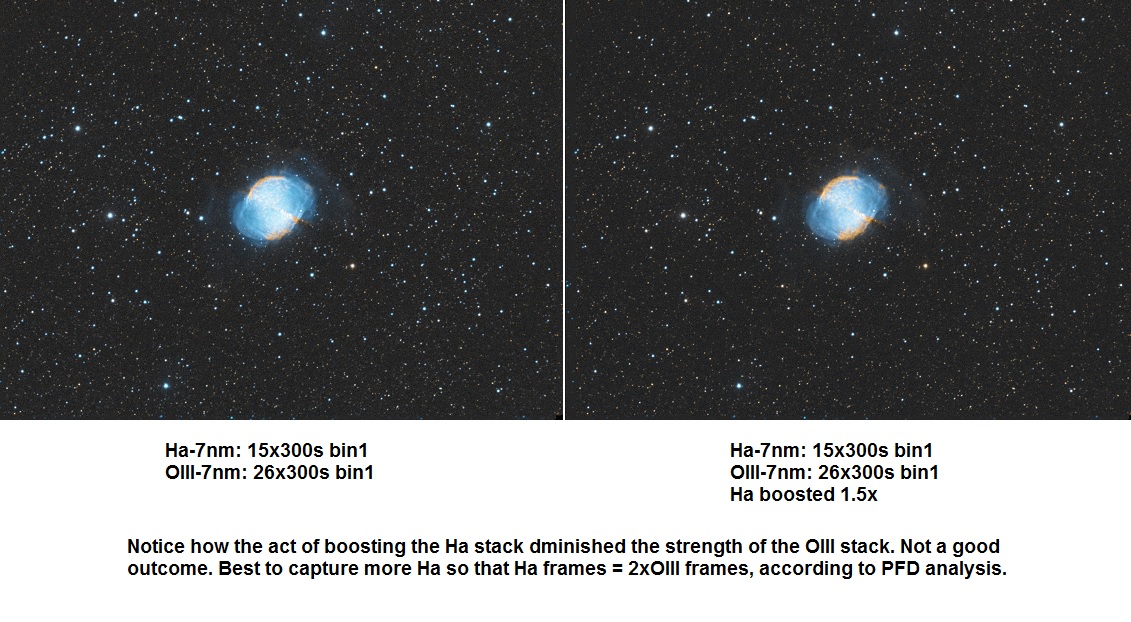 Your approach seems logical to me. As you demonstrate simply boosting the weaker channel to contribute a greater proportion of the luminance can only add more noise and therefore degrade the SNR. So the best approach must be , as you say, to soldier on and get high SNR in all of the narrow band channels before combining them.

But then that does make me think that using an SII filter on more or less anything must require a special sort of martyrdom? Though as you will see in my later post I've found one use for an SII filter at least

Good job Brian. I like your use of ‘scouting image’ approach

Agreed, SII is a challenge. I am by no means an expert in narrowband but I haven't seen any objects strong in SII. Planetary's are stronger in OIII than Ha. Regular emission's are strong in Ha, but sometimes it is a toss-up on second and third place. For example, the Pac Man Nebula: strongest in Ha, then SII, and finally OIII.

You can always create tri-color with a normally weak SII channel but it won't have much visual impact. At least it won't diminish Ha and OIII as long as you don't try to boost SII. At least that is the behavior in APP.

Re: Scouting images, and the funny thing is that I came up with that idea only after I tried applying mathematics to the problem of balancing the filters. I think that "scouting" is a good idea regardless, even if you aren't interested in balancing the SNR. At a minimum it gives you an idea of how difficult an object will be. However, you need bin 2 and a long exposure, in order for it to give you the insight you need. I've been using 600s exposures at bin 2.

I had another clear night. I devoted it to Ha.

Ha is still a little weak, but it is good enough to combine with OIII without boosting. 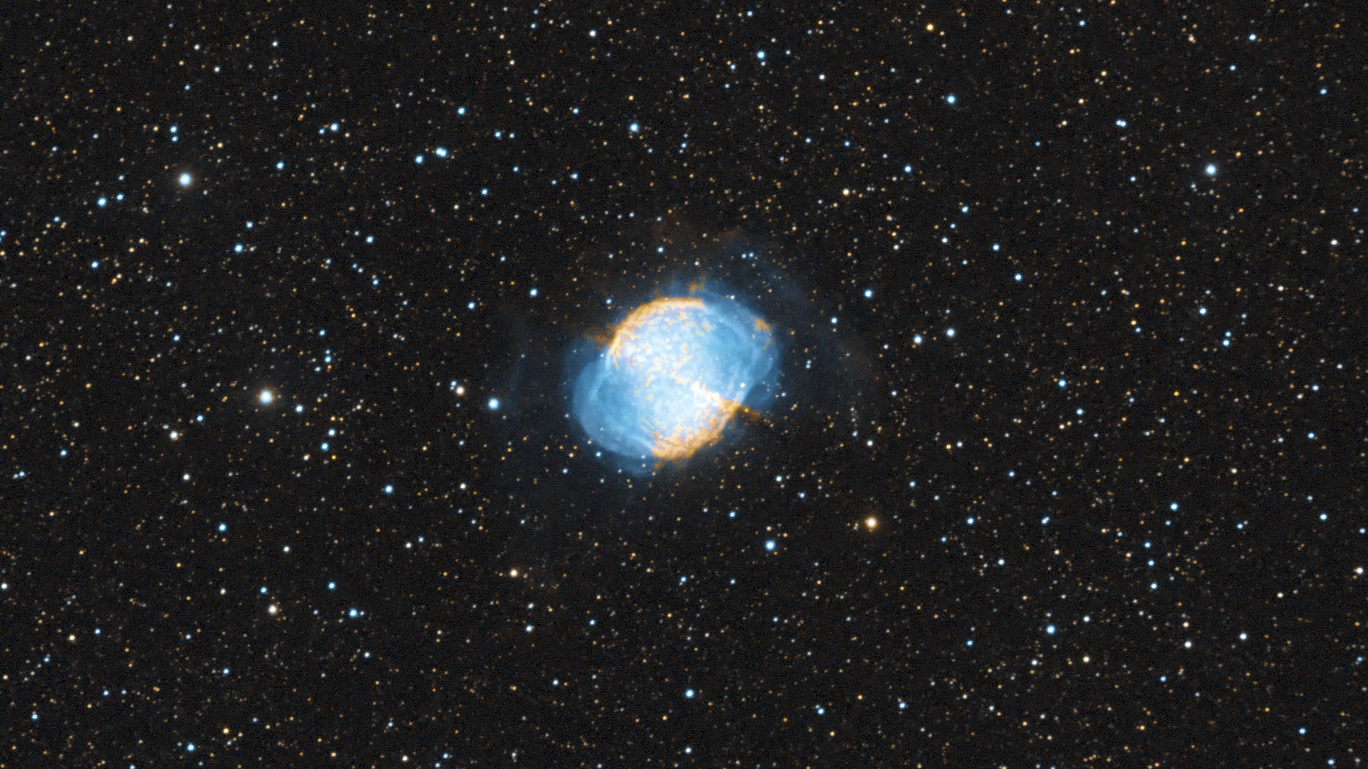