I forgot about this one: my ARP299 / NGC3690 deeps sky project is finished

In total it's a bit over 8 hours of data, captured over roughly 2 months (yes, the amount of clear skies was/is terrible here

). The focus really is into the deep, so as a result the object itself is rather noisy but the majority that's visible all around it are galaxies.

NGC3690 is an object where 2 galaxies are colliding. It is close to the middle in the "box" of Ursa Major and is also an area with a lot of far away galaxies and quasars. These I tried to capture as much as possible.
And I gathered enough data to do do multiple things with it: a color version, an inverted black/white version with captions and an animated GIF showing the star movement from 1953 and 2021.

For all this I used Aladin a lot and also the NED catalogue on https://ned.ipac.caltech.edu/
And per their request: "This research has made use of the NASA/IPAC Extragalactic Database (NED), which is operated by the Jet Propulsion Laboratory, California Institute of Technology, under contract with the National Aeronautics and Space Administration."

1) Color version
This is the original for which I used the Baader Neodymium Skyglow filter and the Optolong L-Pro filter.
At a certain point it became clear that no observable data was being added and noise was not getting any less. I edited it with the purpose to bring out as much as possible but not too much noise.
Quite a challenge because my set-up just doesn't have the right resolution for this (which doesn't stop me). The visible stars have a more sharp edge. Almost everything else visible as blobs and faint star-shaped objects are galaxies and a few quasars.
What is also visible, but very faint, is a "dust lane" (I don't know what it's called). It starts from to the right from the center of NGC 3690 and runs to the right. At first I thought that the capture was wrong, but it turns out to be there.
Link to full 4600px color version: https://i.ibb.co/tCxkZHC/ARP299-NGC3690-Color.jpg 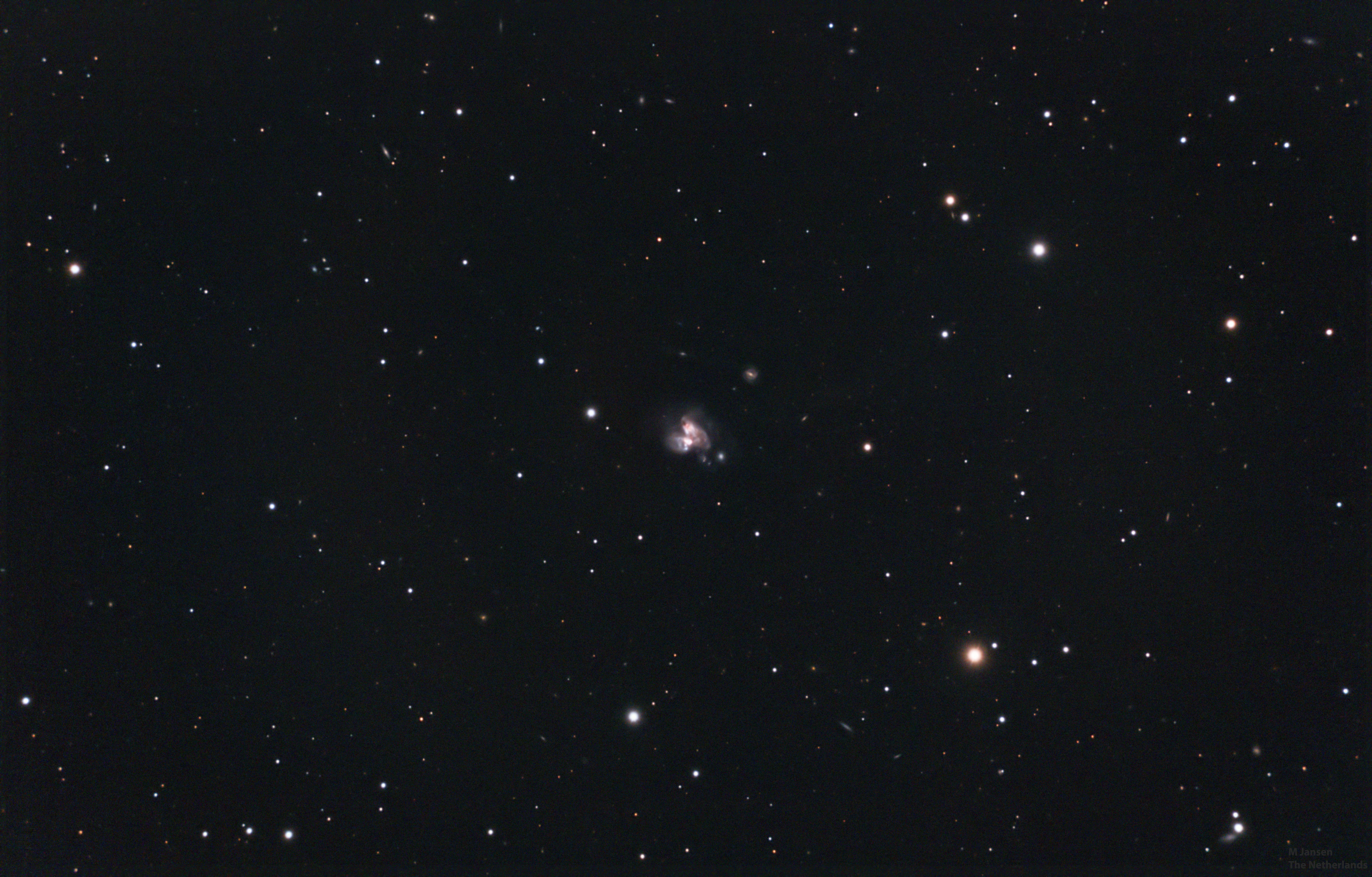 2) Inverted black/white
Actually the "showpiece" of it all. This is made up of the same data as the color version. However, since it is negative and black and white, you can edit much more aggressively. So there is also much more visible.
I also put some of the notations in here, just for fun actually

There was way too much to mark everything, so I chose random objects and looked up information about them.
A G stands for galaxy, QSO is a quasar. A number in gray is the magnitude and a number in red is the distance in billion light years.
The faintest visible is a galaxy with magnitude 22.1. It's in the top right corner.
The farthest is quasar at 11.4 billion light years. This is at the top left corner.
Link to full 4700px version: https://i.ibb.co/y4nfFCW/ARP-299-NGC369 ... -white.jpg 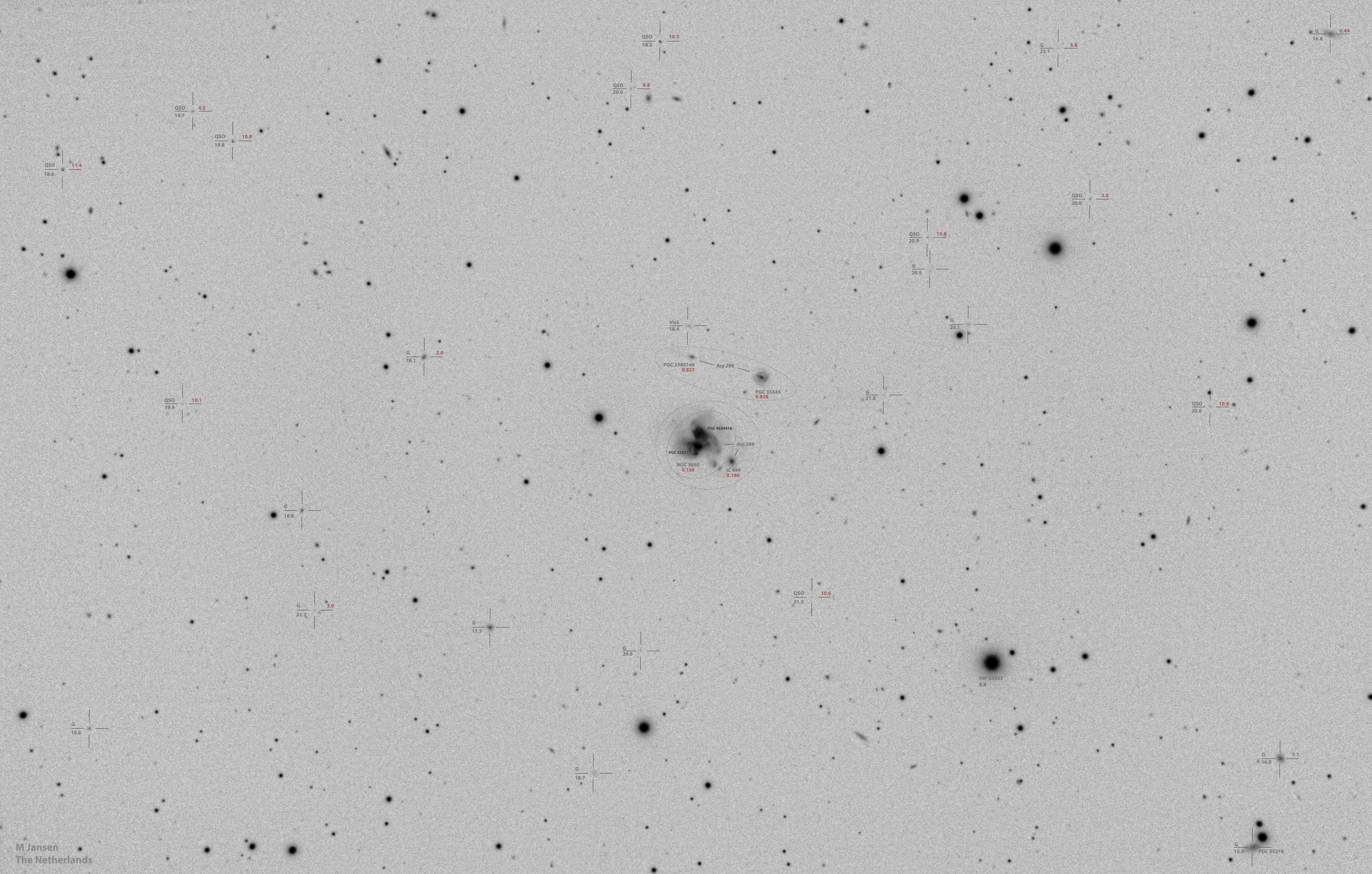 3) Animated GIF 2000px
Since I was busy anyway, I made this one too to show star motion over 68 years. The GIF consists of my image and an image of the Mount Palomar Schmidt telescope from 1953. This is a 1.20 meter Schmidt telescope. It's a good indication too on the progression, since I have a 0.203 meter telescope with almost as much as visible data. Only they had a much shorter integration time wink.gif
I haven't been able to discover anything new, so only the movement of the stars is visible. Which is still a very cool thing of course.
The year is shown at the bottom right.
I overlaid and aligned the two shots in Photoshop. Saved as GIF and made the animated GIF with Microsoft GIF Animator.
Link to full 2000px version: https://i.ibb.co/WDkzX2R/ARP-299-NGC369 ... ed-GIF.gif

Stacked each set separately in DeepSkyStacker

Processed in Siril and Photoshop
Siril: Background Extraction and Histogram for each stack and save as TIF
Photoshop: layered the 3 stack on each other and aligned them. Camera RAW Filter, levels, curves, Neat Image noise reduction filter.
Top

It's interesting that the stars with the highest proper motion are also the faintest.

Professor Celigman has a very helpful website of Arp objects (and others) with good write-ups and photos:
https://cseligman.com/text/arpatlas.htm

Thanks for that link. Seems I have a lot of ARP's to catch

Great work Menno. Really like the animation - 1953 to now showing the proper motion.

I like the way you have added interest with all the extras. The 11.4 B ly quasar is a truly amazing spot. And it it still appears white which shows how much short wavelength high energy that thing was pushing out Ursa major has a lot of interest in it - some compensation fore living at Northern latitudes.

Thanks Tim.
That quasar actually really is in the blue, one of the few real blue objects in the capture. Used Photometric Color Calibration in Siril.
Had to look this up and it's no Blue Shift: most quasars are somewhat blue-ish (this one just plain blue

) or red-ish. The red though they suspect it is caused because if their light is coming through dust or gas.
And yes, Polaris is here at around 53 degrees and there are lots of interesting (but small) in that neighborhood. 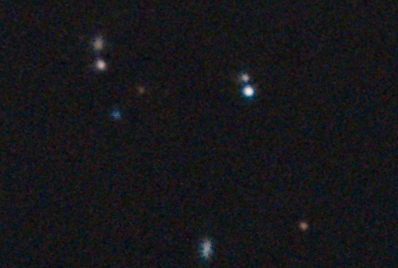 Thanks. Yes makes sense in fact when you think it through -- if the peak output of a quasar is somewhere in the hard UV then allowing for red shift at say Z = 2.5 at 11 B light years (depending on the model) then that that makes for blue visible light ---whereas I think that most galaxies at that sort of distance will be pretty reddened and into the near IR by the expansion of space alone ?
Top

Yes, indeed. Here an example. I am busy with capturing M106 in multi narrowband (around 11 hours of data now) and there is a small patch in view littered with galaxies. This is heavily stretched to show it.
On the left is NGC 4248 and in this whole FOV (around 14' 24" x 07' 14") are 6 galaxy clusters with around 350 galaxies in total. In my capture around 50 galaxies visible. And almost all are red. Distances range from 3 billion to 6 billion lightyears. 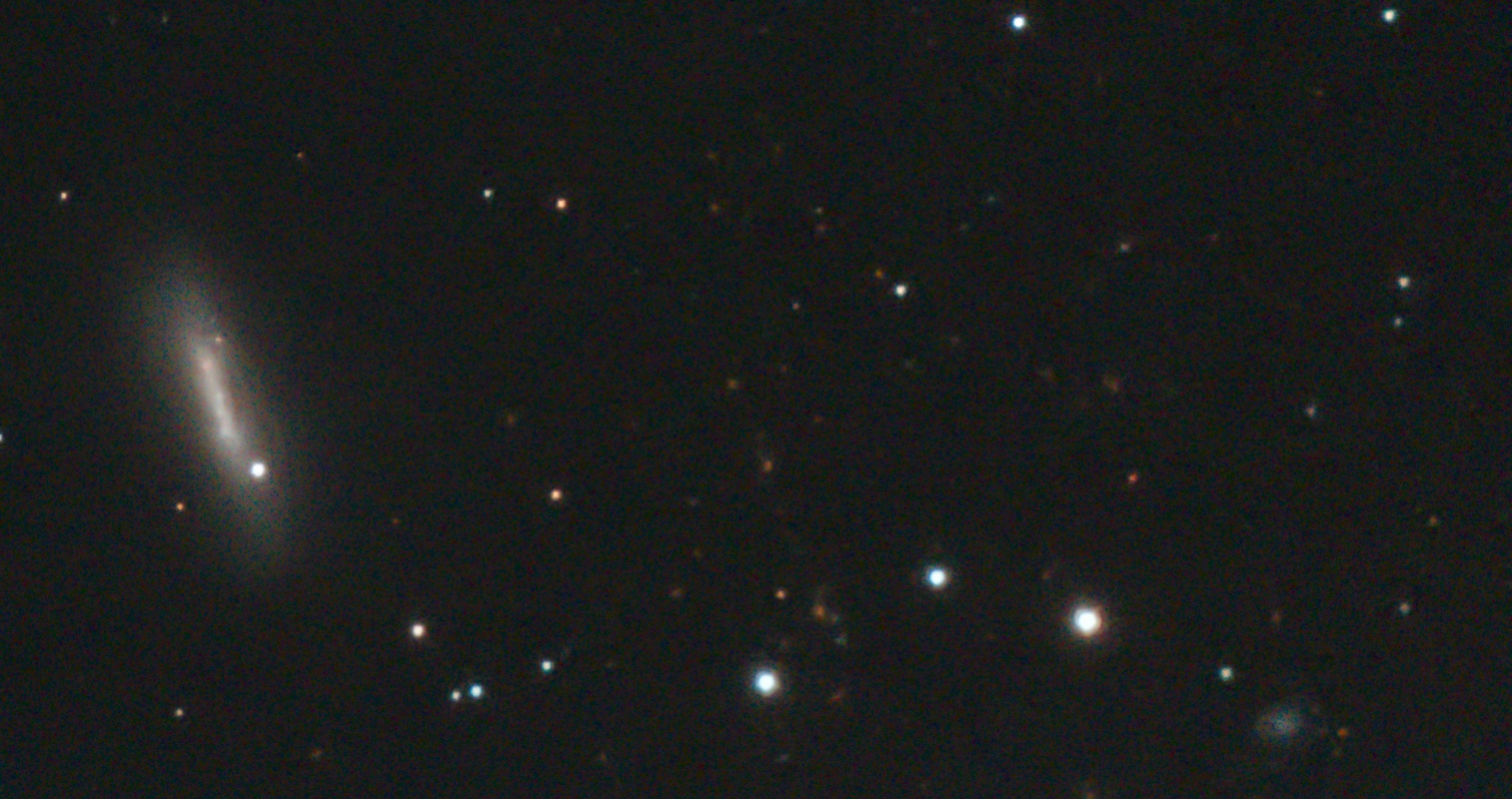