Please share the equipment used and if possible camera settings to help others.
Post Reply
4 posts • Page 1 of 1

No doubt, you will read this and ask yourself: Why?

To answer that question, I must explain that I have an Achromat refractor, not an APO. The William Optics ZenithStar 71 was marketed as "APO-like", and the price point was good! Well, I discovered only later that a lot of people are unhappy with this scope. It does not focus blue light well at all. Please look at the photo at the following link to see the difference. The left-hand photo uses a luminance filter which includes blue light. The right-hand photo uses a Wratten #12 filter which passes only red and green. The difference is dramatic:

I was actually very happy with that monochrome image of M34 with the Wratten #12. In fact when I got my start in astrophotography 50 years ago, nearly every amateur used monochrome emulsions. There was color, but the results were disappointing. Today, everyone's attitudes have changed, so you MUST have color or you are a "nobody". My preference is to use a monochrome camera with LRGB filters, and because of that I have more degrees of freedom.

So I replaced my luminance filter with Wratten #12. (From now on, I will refer to it as "W12".) W12 is a "minus blue" type of filter. That's great, but in order to create color I need R+G+B, or so I thought! How can I make a color image only out of R+G? The answer is to borrow a technique from narrowband astrophotography, specifically bi-color narrowband, like Hydrogen Alpha and Oxygen III but no Sulfur II. There is a particular palette that I like: HOO. Normally, people assign Hydrogen Alpha to the red channel, and split Oxygen III equally between green and blue. I am not too fond of those proportions. Hydrogen Alpha is very strong, so you end up with a screaming red image. I like to split Hydrogen Alpha between red and green, so that I get a pleasing shade of reddish-orange. I used that technique for the following image of M34:

One last note about the image. It looks muted. The reason is that the weather conditions were variable last night, and I had tracking issues so I had to discard a lot of frames. For star clusters I like to achieve a minimum signal-to-noise ratio (SNR) of 100, preferably 200. Last night I was only able to capture enough data to achieve SNR 60. 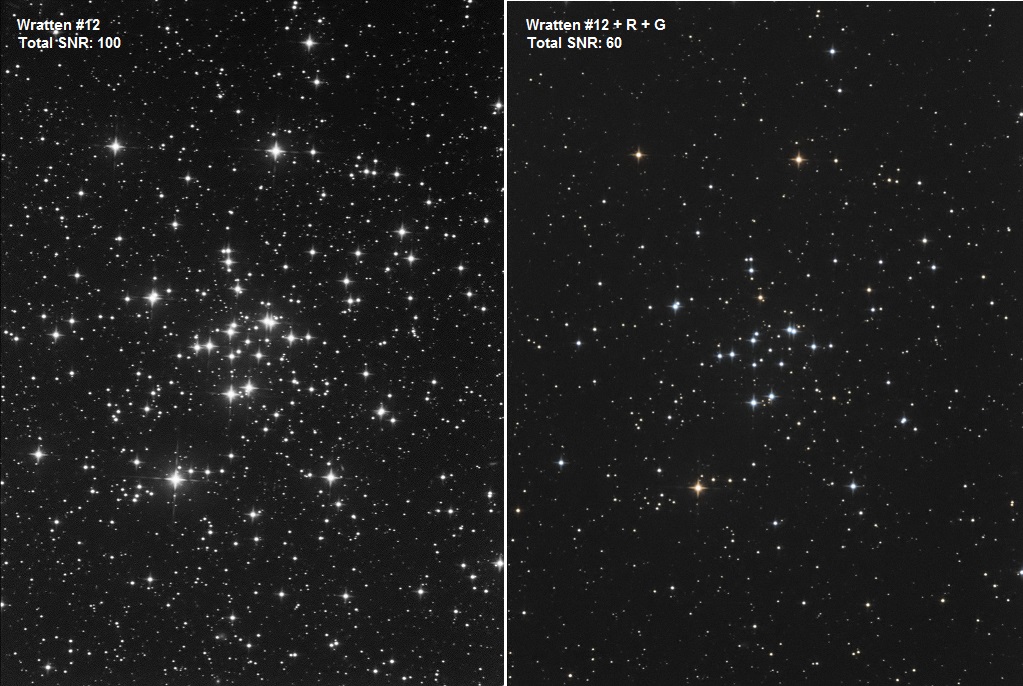 Very good Brian, worth adding frames to the colour effort. Thanks for the useful description of assigning colours across channels.

A few things hit me right away after reading your post:

1- the obvious, this is a fantastic write-up
2- the second obvious point, the color image is excellent
3- I like HOO but the beauty of this, and tricolors for that matter, is that you can combine them to whatever channel your prefer and with specific weights per channel- just how you are describing. This makes the options almost endless to please oneself. I do agree with you that the traditional HOO image, like I posted recently, gives the intense red that may not be pleasing to some.
4- Your statement, Today, everyone's attitudes have changed, so you MUST have color or you are a "nobody". My preference is to use a monochrome camera with LRGB filters, and because of that I have more degrees of freedom, has created so much debate and emotional reactions on so many forums. I have both color and mono cameras and I started out, like many, just using the color camera because "you MUST have color or you are nobody". Well, I too have flipped. I still use my color camera mostly with a duo band filter for quick images and for live views with friends, despite the raging debate that the newer color cameras are catching up to the mono cameras with color filters. While that may be, they can never catch them simply due to the Bayer matrix. Of course, the counter argument is that you need to buy filters, make color flats and dark flats/bias frames, and perhaps even a filter drawer or filter wheel. I am now mostly using the mono camera as you do in order to have way more flexibility and a better color image in the end if processing is done properly. Your write-up is one great example of that. With all this said, one of my favorite type of image is H-alpha in monochrome. I find these some of the most stunning and detailed images without the distraction of the color, if you will. I guess the Ansel Adams approach to astrophotography.

I very much appreciate your feedback. Very insightful.

Today, I added the W12 frames that I captured last week with the color frames from the other night. According to my calculations it raised the total signal-to-noise ratio from 60 to 87. There is something interesting happening that I think I understand: the red stars are just as saturated, but the blue stars are now only subtly blue. When I zoom in on them, I see the issue. They have developed reddish overtones. I think I understand why:

I am using the W12 filter in an unconventional manner. I simply screwed the filter into the nose of the filter wheel. So, when I say I captured W12 frames the light was actually passing through the W12 filter AND the luminance filter. The same for the Red and Green frames. They were also passing through the W12. Ordinarily this wouldn't be a problem except that the cutoff wavelength of W12 doesn't exactly coincide with the cutoff of the Green filter. According to the specs, the Green filter cuts off quite sharply at 500nm. The W12 filter, on the other hand, cuts off more gradually. It is at 50% transmission at 520nm. So, what this means is that the Green frames were underexposed by 10%-20%.

How this affects blue stars is interesting. Remember that I am mixing the stacks similar to the HOO palette. 67% of the Green stack is going to the Blue channel. And since the Green stack is underexposed, there isn't enough signal going to it. So, what happens is that the Red channel overpowers the Blue, and we start to see tinges of red in the blue stars!

When I started this project, I was hesitant to break open my filter wheel, but now since I proved its usefulness, I am going to replace the Blue filter with the W12. Now, I'll have Luminance (for Photometry, since I de-focus anyhow), Red and Green for HOO-like color imaging, and W12. That leaves the last slot for my Dark filter. I can't live without that one.