One of my favorite targets, then and now, is M34 in Perseus. It contains bright 7th and 8th magnitude blue stars, a few red stars, and a sea of fainter stars.

As you can see, it came out very well. The Newtonian Mask added interest to otherwise bland, round stars.

Please don't zoom in too far. I was having trouble with tracking last night due to a stupid user error. Plus, it looks a bit noisy since I did not employ noise reduction.

Please refer to my post on my Newtonian Mask for further information:
viewtopic.php?f=10&t=3364

You can read more about my use of the Wratten #12 in a future post. 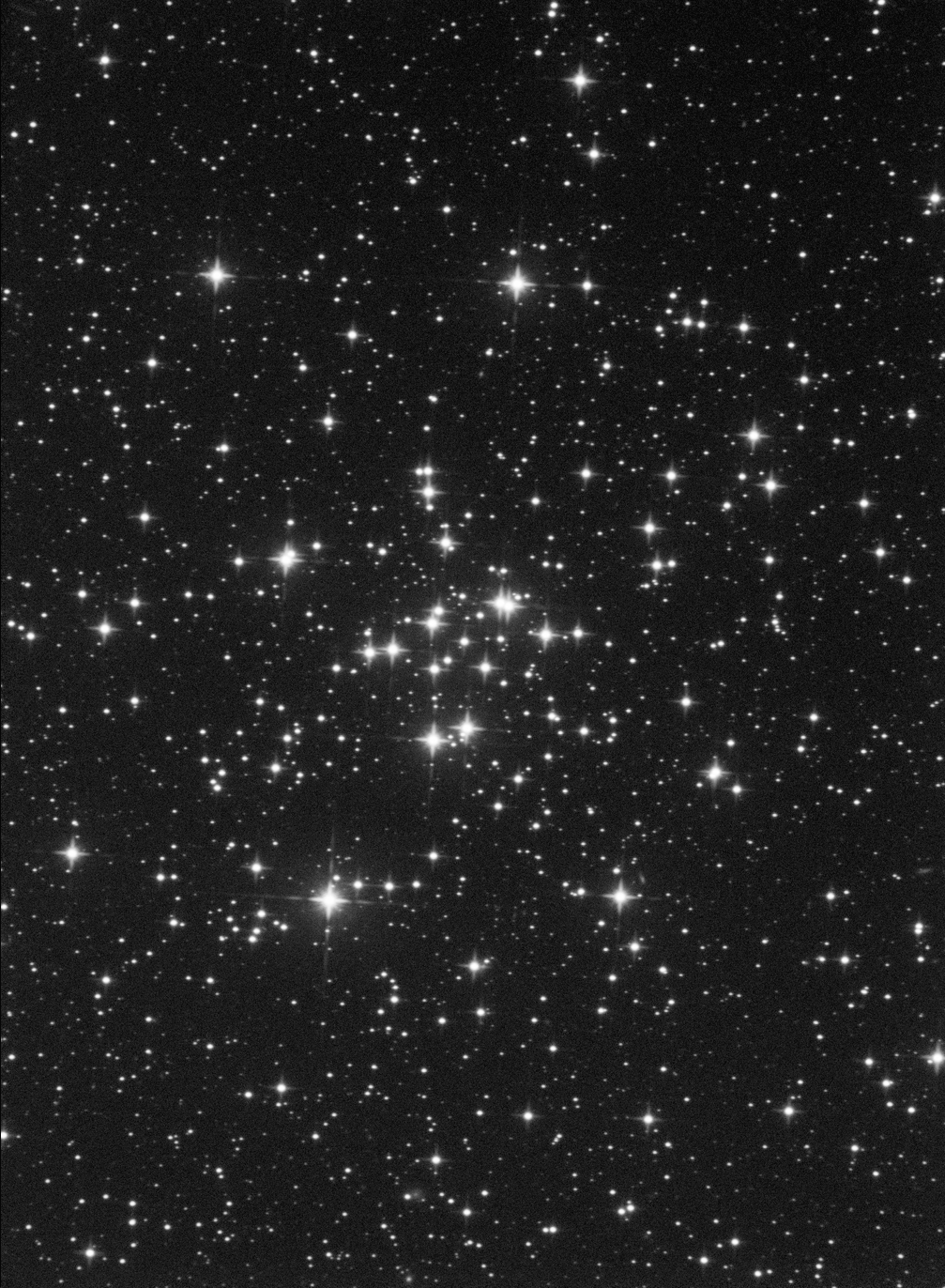 Nice image and plenty of stars. A creative way to enhance the image with the mask and overcome the star saturation with the #12 filter.

Thanks for reminding me of NEAT, Dave.

Here is the same image of M34 as posted earlier, but now employing NEAT for noise reduction: 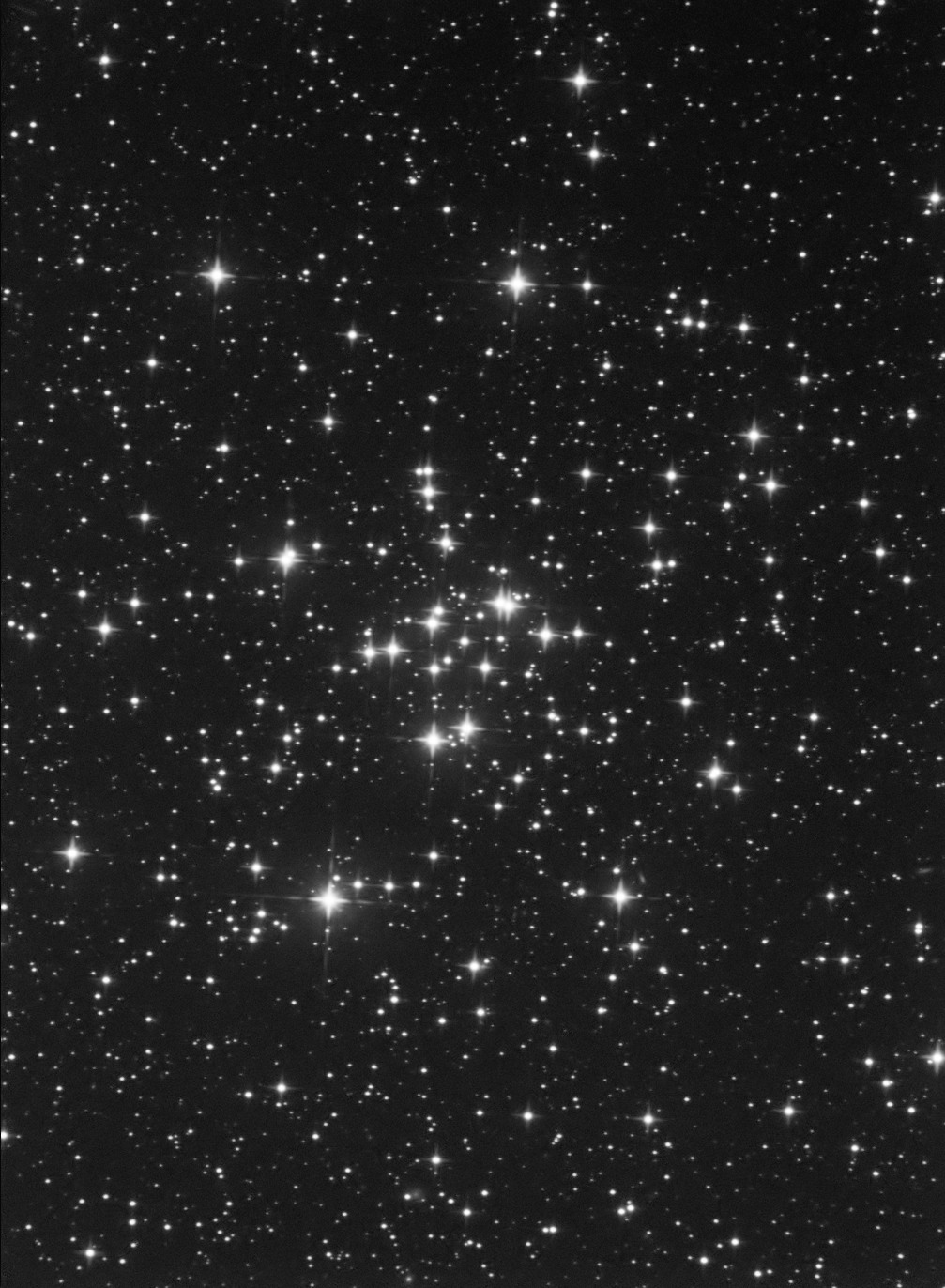 I also love star clusters. As a kid I was first captivated and hooked into Astronomy by the view of the Hyades and the Pleiades through a little 30 x 30 telescope I had. To me it is tan aspect of Astronomy that remains better with the naked eye than via EEA and photography - although I must admit that since buying the camera last fall I have gone almost entirely electronic and now have a library of shots of a huge number of star clusters (the Owl, the beehive, M35, Caroline's rose and the Pleiades being favourites).

I am interested in your pictures - they look great but I must confess that I don't understand the techniques that you are using, or the whys and wherefores? What exactly does the Newtonian mask technique achieve - is it a way to cut down the light and avoid saturation? Most of the pictures that I have taken have been relatively short exposures and not for too long (e.g 10 minutes of 10s exposures at unity gain at F ~ 5 and an ASI 124 OSC) which seems enough because the main stars and their colours are bright - but of course this sacrifices the fainter stuff).

Anyway grateful for any brief explanation or refs you could point to (the correct colour exposure ratio technique in your other post looks interesting too but that is really only relevant to mono cameras and presently I just have the OSC).
best wishes
TimH
Top

Thank you for your reply! Great questions.

The Newtonian Mask adds visual interest. I have a refractor. Refractors render stars as round discs due to the clear, unobstructed path provided by the lens system. Newtonian reflectors utilize two mirrors. The primary mirror gathers starlight, and the secondary mirror redirects the light 90 degrees into your camera. The secondary mirror partially blocks starlight as it travels through the system. There is the mirror, which is usually 20-25% the diameter of the primary, and there are the spider vanes that suspend the mirror at the tube's center. Starlight must flow around these obstructions, and in the process, create a cross-like diffraction pattern that you see in your image. The diffraction pattern is mostly noticeable on bright stars. Personally, I like the diffraction pattern. You have two choices if you have a refractor: create them with software, or mimic a Newtonian reflector by creating an obstruction. I've tried software, specifically StarTools, to simulate diffraction spikes but I felt that the image looked contrived. (There are other software packages that do a better job, from what I understand.) If you want to create an obstruction, I've seen people use dental floss! I took a different approach. I created a 3D-print of a faux secondary mirror and spider vanes, and then affixed it to the end of my refractor's dew shield. You can see it here: viewtopic.php?f=10&t=3364

The Wratten #12 filter corrects my refractor's poor optics. This filter passes red and green light but not blue. My refractor is a doublet, not a triplet. Doublets do a poor job of focusing all colors. Triplets do a much better job. This problem is severe for my telescope. In fact, people have written scathing commentaries against this particular telescope. It does do a fine job of focusing red and green, but blue is absolutely terrible. You can read my write-up here: viewtopic.php?f=10&t=3367

My monochrome camera allows me to experiment more freely. Playing around with filters is one of the great benefits of owning a monochrome camera, but there is a downside. There is the extra cost for filters, a filter wheel, and the extra steps needed to create a color image. Still, I prefer this platform.

Long exposures achieve the desired effect. My monochrome camera is a CCD, not CMOS. CCD sensors suffer from higher readout noise than CMOS. As a consequence, CCD's require longer exposure times. I don't like going below 60-seconds. Nothing prevents me from going lower, but the downside is that I would need to significantly increase the total integration in order to achieve the same low-noise final image. By comparison, my monochrome CMOS camera is happy with 20-second exposures. I can go lower, but then I run into the same problem: I would need to increase total integration time. So, why do I choose CCD over CMOS? In my opinion, the image quality of a CCD is higher. This is mostly due to the sensor's architecture. My CCD has a single, expensive analog-to-digital converter. CMOS sensors, on the other hand, have a large number of less costly analog-to-digital converters. The benefit of CMOS is that the image can be clocked out of the sensor at much higher rates because the A/D's run in parallel. That is why CMOS is preferred for lunar and planetary imaging which require high frame rates. In my image of M34, I used a rather long 85-second exposure. I did this for two reasons. First, I wanted to capture a lot of diffraction spikes. Second, I wanted to test a theory. Up until this time, I firmly believed that my problem with "fat stars" was due to saturation of bright stars. I wanted to prove that this was not the case once I began using the Wratten #12 filter (minus blue). Next year, when I have the opportunity I will image M34 again. I'll dial back the exposure to 60 seconds.

Thanks for your interest. I hope I answered your questions.

EDIT: There is one last bit that I forgot to mention. What effect does the Wratten #12 filter have on color astrophotography? By definition, the Wratten #12 subtracts blue, but blue is an important component of a color image. So, how did I create the color images seen here: viewtopic.php?f=16&t=3410

I accomplished those color images by borrowing a technique used in narrowband imaging of emission nebulae, specifically bi-color imaging in hydrogen (Ha) and oxygen (OIII). There is something called a HOO palette. (Perhaps you have heard of the SHO palette. That palette was made famous by the Hubble Space Telescope. It is tri-color, which includes sulfur SII.) Anyhow, this technique maps two colors to three. For narrowband using HOO, you would map Ha to Red, and OIII to Green and Blue, therefore "HOO" = "RGB"! Now, in my case I have a Red stack and a Green stack that I want to map to RGB. So, I take 67% of my Red Stack and assign it to the Red Channel, and 67% of my Green Stack and assign it to the Blue Channel. Finally, I assign the remaining 33% of Red and 33% of Green to the Green Channel. Color rendition is not perfect. Blue stars tend to be cyan, and Red stars are orange. In the next couple weeks, when the weather clears and the Moon goes away, I plan to image star clusters having extremely red and blue stars. I am quite interested to see how they render.

Thanks so much for taking the trouble to explain it all so clearly! A lot of interesting thoughts there. I get it about appearance. Indeed part of the reason I have persisted with the Dobsonian is that it makes for nicer looking star fields (with all the brighter stars displaying those sparkly diffraction spikes) than does my perfectly decent 4 inch apo triplet refractor (William Zenithstar 110mm). Never considered the possibility of reverse engineering the refractor to produce a reflector-like image --- but it would be a way of getting a wider FOV --encompassing all of the Pleiades -longer exposures showing the dust - AND diffraction spikes. Not sure about dental floss but worth a try

That is also a very interesting and ingenious story around the achromat and the Wratten 12. In principle I would love to have a mono CCD (or indeed CMOS) just to try and see the effect of using every pixel. ..or try serious photometry on variable stars. But put off by the (relative) operational and post-processing complexity (although I like the way you removed that) --but mainly the reality that Astronomy on this damp cloudy island has so often to be a snatched affair of an hour here and an hour there. Anyway just for fun and comparison I will post up my very short take on M34 taken on the dob using the CMOS OSC -- it's OK but not any sort of astrobin candidate.

Just for comparison here is an image of M34 taken at F4.7 on a 10 inch dob reflector - 72 x 5s exposures, gain 200 for a total of just 6 minutes on a cooled ASI 294 OSC. Image scale is too big for the size of the cluster and the 'real' reflector spikes are less prominent than in Brian's image (might have been better though with more exposure if possible without blowing up the stars). At 0.9 arcsec/ pixel badly oversampled for the seeing (probably about 4-5 arcsec) and it looked similar at BIN2.

That is a tight FOV! You've got good star color. It is amazing what CMOS cameras can do with such short exposures. On the positive side, your FOV would be great for galaxies. M81 Bode's Galaxy will be coming around soon. Give it a try. Here is mine from a year ago. I used Bin 1 for luminance, and Bin 2 for RGB. This year I will try Bin 1 all around using the Wratten #12 filter and R+G. Star color should be a lot better. 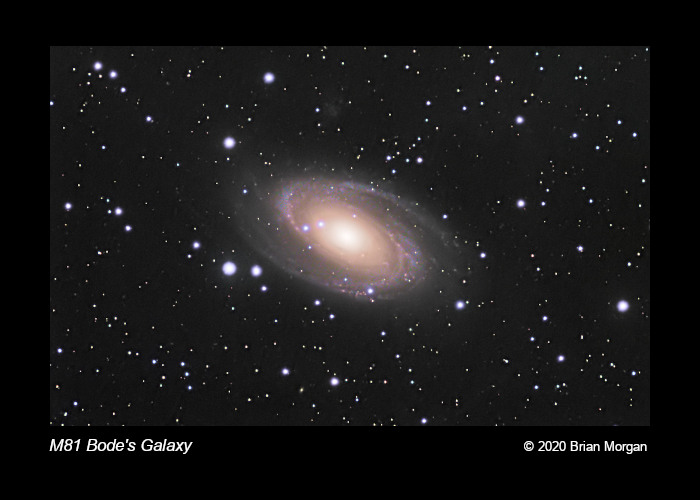