Please share the equipment used and if possible camera settings to help others.
Post Reply
6 posts • Page 1 of 1

NGC 205 is a satellite galaxy of M31, the Andromeda Galaxy. Long integration time images show an interesting feature: NGC 205 has two major axes! You have to search on AstroBin to find examples but I first encountered this effect in a NASA APOD image from a few months ago: http://amir.torgheh.ir/picture.php?/1237/category/14

To get an idea of the total integration time I would need I turned to my tool set. It immediately became clear that this is not something I can do at bin 1 which would give me the highest quality image. So I looked into bin 2 but still the total integration time was prohibitive. Finally I looked at bin 3. Now we are talking. I figured that I needed 3 to 6 hours total. But the problem with bin 3 is its CCD resolution of 6.9 arc-seconds per pixel. That is the very definition of under-sampling!

So I decided that my feeble refractor is unsuited for this project but it can play a role. How is that? I can use it to determine exactly how much integration time I need. Then, I will turn to a remote host with their large aperture scopes. With my tool set it is easy to determine the integration needed at the remote host based on the results of my tiny refractor.

Last night I planned to capture 3 hours of data but clouds thwarted my attempt. All I could salvage was 24 minutes of good data. In the attached image you can see a side-by-side comparison of the stack from last night using bin 3 (on the right) and part of a mosaic that I created last year using bin 1. Notice that each used 90-second subs.

The image on the left has its pluses and minuses: its got good resolution due to bin 1 but the signal-to-noise ratio isn't great. Notice the unsightly noise and the meager signal strength.

The image on the right also has its pluses and minuses: its got great signal-to-noise but the resolution is horrible. Like I said the image quality from bin 3 in my case is poor but what it has is lots of light-gathering power. It's a light bucket! And that's what I need to get an idea of the required total integration time.

One final note. It may be my imagination but I think I can see the early signs of the elusive second major axis. The main axis is at the 12:30 position but it seems to me that there are hints of a second one at about the 1:30 position. Do you see it?

Nice!
I feel another challenge coming

But very cool info this on those axis. Here I just started with M31 and surroundings, it's popping out behind a building now.
Always thought that NGC 205 was just a "blob", seems I was wrong

Mother Nature was good to me last night. She gave me a solid 3 hours of imaging. Every sub was a keeper.

I've attached two images:
1. A four panel image of my images.
2. A section of a NASA APOD image by Amir H. Abolfath.

Panels A and B were inherited from my previous post above. They are:
A. Part of a mosaic of M31 from last year. 21x90s at bin1.
B. Captured the night before last. 16x90s at bin3. In my previous post I discussed the rationale for choosing bin3.

Panels C and D include the extra 3 hours at bin3:
C. Now I can clearly see a "tail" that begins at the center of NGC 205 and roughly ends at the bright star below the "P" in "Panel C". If you compare this image to Amir's you will see that the direction of that tail is coincident with the direction from the center of M31 to NGC 205.
D. The same image as Panel C but with greater contrast to show that there is a shorter "anti-tail". The "anti-tail" points in the direction of the core of M31, and the "tail" points away from it.

If you compare Panels C and D to Amir's image you see similarities but I still think I need more integration time. 3.5 hours isn't long enough using my equipment under Bortle 5 skies.

According to my calculations NGC 205's signal-to-noise ratio (SNR) is 23 in my image. I have done a decent survey of AstroBin "Top Pick" images and discovered that a minimum SNR of 30 is a common characteristic they share.

I now have enough information to place an order with a big scope at the remote site. I'll target SNR 40. Let's see which scope can do it in less time!

By the way I have a theory as to what the tail(s) are. (This is just a guess. Later I'll research it to see what the professionals say.) I think that the tail that points away from M31 is much like the tail of a comet within our solar system. I believe that the intense solar wind from M31's core is pushing matter away from NGC 205. What about the anti-tail? My best guess is that this matter is gravitationally attracted to M31. 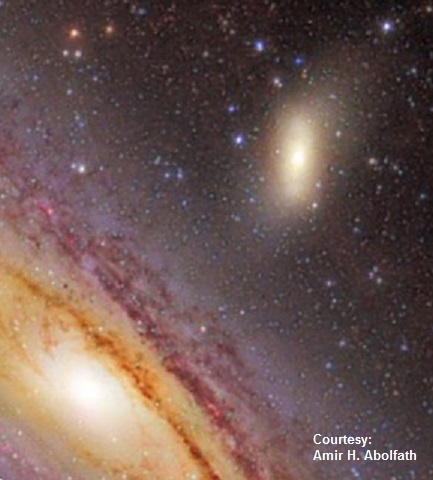 I just ran some numbers.

I might want to start out with just the luminance to see how badly I blow out M31's core. I may have to do HDR.