Using SC to mitigate declination drift in an old mount

Using SC to mitigate declination drift in an old mount

What would be the impact of some flexure of the guide scope during the 90-degree rotation? Would it affect the alignment? I ask because PHD2 Guiding Assistant says that my PA is off by about 3 arc-minutes. I am not suggesting in any way that this is a problem with SC. There are many physical factors including intra-session soil movement which I suspect is responsible for another anomaly. And of course my mount is probably not machined to the exacting standards of modern mounts.

All of my imaging faces east between +20 and +50 declination. For years I've seen a consistent drift southward of the star field, approximately 1 arc-minute over the course of 3 hours. In the past I solved this problem by tweaking the slow-mo manual control between filter changes. But since I used exposures of no more than 90 seconds, it was never a problem. Now with auto-guiding in RA, I am trying to push beyond 240 seconds, but I am hitting a wall with declination drift.

Question: Is there an adjustment that I can make at the time of polar alignment to mitigate the declination drift? Dial in more or less altitude or azimuth?

I should be able to solve it with Spherical Trigonometry, but I'm suffering from brain freeze this morning. I made this crude drawing: 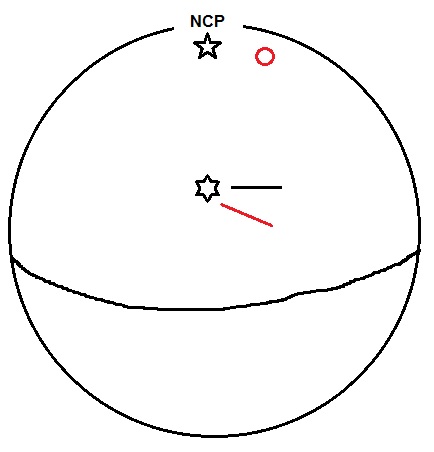 This is what I think is happening. When performing PA, SharpCap is aligning my polar axis within several arc-seconds of the North Celestial Pole (NCP), in other words "Excellent". When complete, I unlock both axes and move to the target, east of the meridian and +40 declination. Due to mechanical reasons, my polar axis no longer points at NCP. It now points at the red circle. As I observed on many occasions over years, the target consistently drifts southward at approximately 0.5 arc-second per minute which is what PHD2's Guiding Assistant reports. That is consistent with my experience that the drift amounts to about 1 arc-minute over a 3-hour session.

I think that the polar axis altitude is dropping towards the horizon by a couple arc-minutes when PA is completed and I slew to a target. The telescopes's center of mass might be shifting northward, resulting in the axis dropping. This makes sense when I look at how the altitude adjustment works. It is essentially a "turnbuckle". I can't feel any "slop" but I am sure there is some. There is no "set screw" that I can lock.

I think I can account for this by adjusting the polar axis altitude until SC PA tells me "DOWN" 1-2 arc-minutes. This might help. All I need to do is cut the declination drift in half, and then I'm golden.

flexure of the guide scope mounting during polar alignment is a bad thing - it will definitely throw off alignment results (and is probably the biggest cause of bad results). Even the weight of a dangling loop of USB cable on the guide camera can have an effect (I tested this).

Fortunately there are ways to check - re-running polar alignment from position 2 back to position 1 after adjustment will give good alignment if nothing is flexing and alignment being out if something is moving.

If you are getting movement of the mount axis after aligning then the amount of drift will depend on the direction that you are imaging in. For instance suppose your axis droops towards the north after alignment then you will get declination drift when imaging east and west but practically nothing when imaging north and south. The declination error in this case will be a sine wave with the peak/trough in the direction that the axis has moved and 180 degrees opposite. The drift rate is the gradient of the sine wave, which is close to zero near the peak/trough and a maximum where the wave crosses the y=0 (delta dec = 0) point.

If you check the drift in 2 or three different directions after alignment you should be able to work out which way the mount has moved and then, as you say, bake in an offest to your target position the next time around.

Perfect! I have some clear skies tonight.

Sometimes I do check PA, but I begin at the initial position again. Stupid me!

I have noticed that DEC drift subsides the closer I get to the meridian, and RA error increases.

I am now able to achieve round stars using 600-second exposures. The 98% Moon was only 60 degrees away, so I used an Ha filter on a random star field, east of the meridian, +36 declination, about 45 degrees altitude.

For polar alignment, I made sure that the USB cable was tied to the main scope to mitigate flexure. I began as I normally do, and achieved an Excellent rating. Then I restarted PA, set the current position as the start point, and then rotated back. The error was about 1 arcmin. I adjusted it, and then repeated about half a dozen times. On each iteration I still had some error, but I worked to minimize it.

After PA, I moved to a random star field. PHD2 said that I still had declination drift that would limit me to 240-second exposures. I returned to PA, and verified that the alignment was still good. It was. Then I decided to try my "DOWN 1-2 arcmin" method as I described in a previous post. Actually I started with DOWN 3 arcmin. I returned to the random star field. It was too much, so I made it DOWN 2 arcmin. That was the secret sauce.

Here are the results: 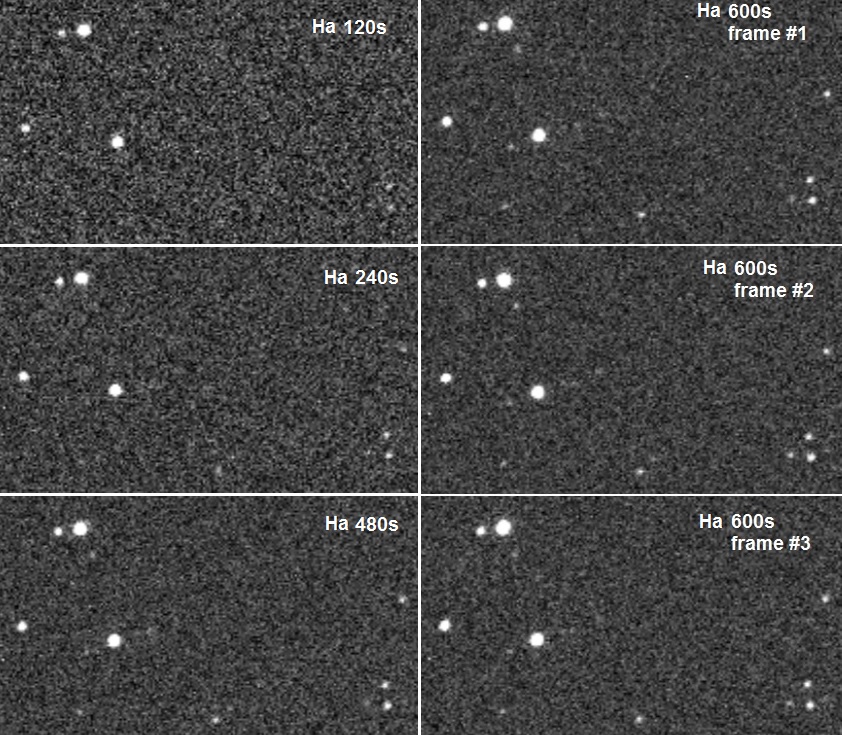 excellent - those stars look really good - glad that it worked

What's also amazing is that I am not using Periodic Error Correction (PEC). I am relying on PHD2 to "guide out" 60 arcsec p-p of PE. I am fortunate to have a rather large pixel scale of 2.3 arcsec per pixel. My camera's 4.65um pixels are a bit large for 418mm focal length. In other words, my bin 1 is what other people might regard as their bin 2. That works in my favor.

I think that the polar axis altitude is dropping towards the horizon by a couple arc-minutes when PA is completed and I slew to a target. The telescopes's center of mass might be shifting northward, resulting in the axis dropping. This makes sense when I look at how the altitude adjustment works. It is essentially a "turnbuckle". I can't feel any "slop" but I am sure there is some. There is no "set screw" that I can lock.

I was correct when I said that the polar axis is free to pivot with adjustments to the turnbuckle, but I was wrong when I said that there is no "set screw" for locking the axis. Actually it is a *nut* and not a screw. Now I can lock the axis when Polar Alignment is completed. More importantly, there is no longer a need to dial in "DOWN 1-2 arc-minutes" as I mentioned. That was just a kludge to compensate for the backlash in the turnbuckle!

There were a couple other things I did that dramatically tamed declination drift: (1) The guide scope's attachment point to the main scope was not locked in. That was a poor design by William Optics. Cured with Gorilla Glue Epoxy; (2) Better cable management. I made a video about it:

good to hear that you've tracked down the mysteries of the altitude/azimuth adjustment and locking it off correctly. If manufacturers put as much design effort into the alt/az adjustment mechanism on equatorial mounts as they put into go to handsets etc then astronomy would be much easier hobby!

I'm not sure that I've heard of flexure being corrected using gorilla glue before! I guess it's a permanent solution to the problem

Regarding the use of Gorilla Glue:
My particular William Optics imaging scope has two mounting points on the tube for accessories. I had to separately purchase a dovetail shoe that mates with the mounting point. The design flaw came about by requiring only one screw to hold down the shoe. No matter how tightly I torqued it, the shoe would still twist. I tried double-sided sticky tape between the shoe and the mounting point, but that just added sponginess. Anyhow, the solution was to buy another scope from a different manufacturer...no, just kidding...the solution was to put two drops of Gorilla Epoxy Gel between the shoe and the mounting point. Problem solved. I've noticed that William Optics now uses two screws in their designs.