Using SharpCap for any Non-Astro use including Microscopy, high speed imaging or anything else!
Post Reply
7 posts • Page 1 of 1

We have a nesting box attached to the wall at the back of the house. A pair of Coal Tits have now begun the onerous task of feeding their newly hatched chicks. https://en.wikipedia.org/wiki/Coal_tit . Interestingly, the Coal Tits only use the nesting box every alternate year.

Each GIF comprises 44 frames. The incoming GIF has been produced at 3 frames per second, the outgoing at 7 frames per second. The captures were at 29 fps. Each GIF covers around 1.5s of elapsed time, demonstrating the bird's flying skill at its approach to the box. Because of the speed it was impossible to react to an approach or departure, I set off sequences of 10,000 frame SER files and used astronomical software to process.

FastStone: used to batch convert sets of 44 images to reduce size to 10% of original frames.
PIPP: split 10,000 frame SER file into 10,000 individual PNGs. The selected reduced images were brightened with a gamma of 2.5 and combined to produce the GIFs.

An interesting exercise showing the application of astronomical software to wildlife photography.

From the markings they look similar to our "sparrow":
https://en.wikipedia.org/wiki/American_sparrow

Although the ones around here are closer to this:
https://en.wikipedia.org/wiki/Old_World_sparrow

Factoid: The very first thing I wanted to be, even before an Astronomer, was an Ornithologist.

The birds are about 10cm in length. What amazes me is the speed of approach and the size of the nesting box hole - some precision flying there.

Back in the 60s we had a bird feeder atop a pole about 8 feet off the ground. I took an Instamatic camera and tethered it to a cross member. I tied a loop around the shutter trigger and ran the string to the bathroom window. I waited for the birds to return. We had two types that would feed: Blue Jays and Sparrows. (We had other birds but they weren't keen on the feeder idea.) I'd wait for the proper moment and pulled the string. When the prints arrived from the developer the Blue Jays, having a larger brain and more sinister outlook on life, were spooked by the pull of the string. The Sparrows on the other hand weren't too bright and happily posed for a photograph.

Did you use "FastStone Image Viewer" to create the animated GIF? Are you happy with it? I used some other software 1.5 years ago that I would not recommend.

I had an Instamatic a while back.

I never realised FastStone could produce GIFs - looks like it is something to do with 'Image Strip Builder'?

I used PIPP to create the Animated GIFs. PIPP allowed me to: 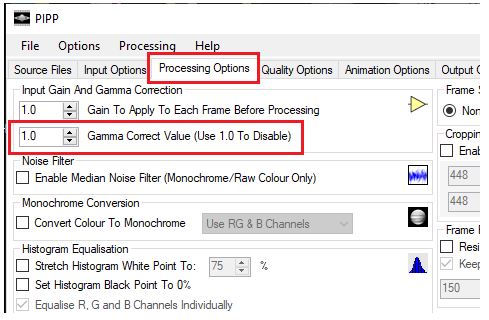 FastStone Image Editor is quite a useful program for dealing with astro images and the price is right.
https://faststone.org/FSViewerDetail.htm. It has a batch editing capability which is useful for repetitive tasks.
If a set of images were calibrated and stacked in a program such as Deep Sky Stacker, then FastStone has the capability to process the stack in the same way as GIMP or PhotoShop. See the menu options below.

Ah, PIPP, I never thought to look there! I was using something called Aoao Photo Digital Studio. It was their free trial. I just had a devil of a time getting it to do what I wanted. This was two years ago so maybe they improved it.